In the city of Shewan, approximately 250 insurgents ambushed 30 Marines and paid a heavy price for it. Shewan has historically been a safe haven for insurgents who used to plan and stage attacks against Coalition Forces in the Bala Baluk district.

The city is home to several major insurgent leaders. Reports indicate that more than 250 full-time fighters reside in the city and in the surrounding villages.

Shewan had been a thorn in the side of Task Force 2d Battalion, 7th Marine Regiment, Special Purpose Marine Air Ground Task Force Afghanistan throughout the Marines’ deployment here in support of Operation Enduring Freedom, because it controls an important supply route into the Bala Baluk district. Opening the route was key to continuing combat operations in the area.

THE PATROL: “The day started out with a 10-kilometer patrol with elements mounted and dismounted, so by the time we got to Shewan, we were pretty beat,” said a DM (designated marksman) who requested to remain unidentified. “Our vehicles came under a barrage of enemy RPGs and machine gun fire. One of our ‘humvees’ was disabled from RPG fire, and the Marines inside dismounted and laid down suppressive fire so they could evacuate a Marine who was knocked unconscious from the blast.”

The vicious attack that left the humvee destroyed and several of the Marines pinned down in the kill zone sparked an intense eight-hour battle as the platoon desperately fought to recover their comrades. After recovering the Marines trapped in the kill zone, another platoon sergeant led numerous attacks on enemy fortified positions while the platoon fought house to house and trench to trench in order to clear through the enemy ambush site.

LESSONS LEARNED: “The biggest thing to take from that day is what Marines can accomplish when they’re given the opportunity to fight,” the sniper said. “A small group of Marines met a numerically superior force and embarrassed them in their own backyard. The insurgents told the townspeople that they were stronger than the Americans, and that day we showed them they were wrong.”

During the battle, the designated marksman single handedly thwarted a company sized enemy RPG and machine gun ambush by reportedly killing 20 enemy fighters with his devastatingly accurate precision fire. He selflessly exposed himself time and again to intense enemy fire during a critical point in the eight-hour battle for Shewan in order to kill any enemy combatants who attempted to engage or maneuver on the Marines in the kill zone. What made his actions even more impressive was the fact that he didn’t miss any shots, despite the enemies’ rounds impacting within a foot of his fighting position.

“I was in my own little world,” the young corporal said. “I wasn’t even aware of a lot of the rounds impacting near my position, because I was concentrating so hard on making sure my rounds were on target.”

MORE THAN 50 DEAD: After calling for close-air support, the small group of Marines pushed forward and broke the enemies’ spirit as many of them dropped their weapons and fled the battlefield. At the end of the battle, the Marines had reduced an enemy stronghold, killed more than 50 insurgents and wounded several more.

“I didn’t realize how many bad guys there were until we had broken through the enemies’ lines and forced them to retreat. It was roughly 250 insurgents against 30 of us,” the corporal said. “It was a good day for the Marine Corps. We killed a lot of bad guys, and none of our guys were seriously injured.” 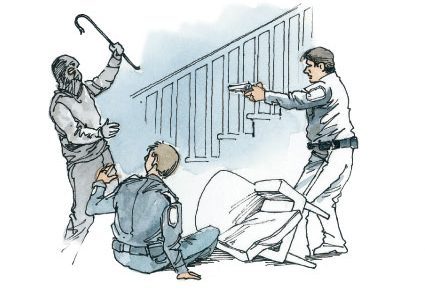