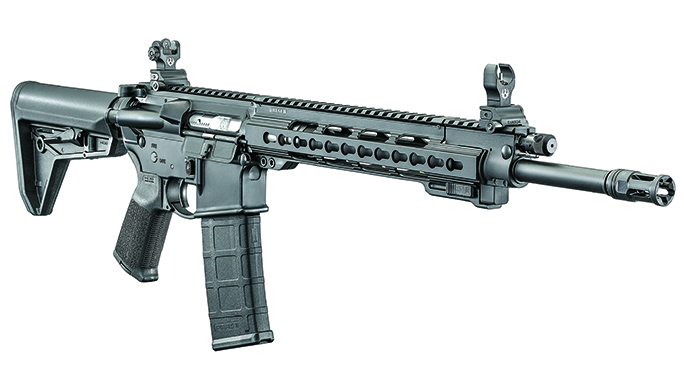 1 of 10
Ruger AR Rifles
Centerfire or rimfire, piston-driven or direct impingement, Ruger has a reliable AR-platform rifle to suit your needs, including the stow-and-go SR-556 Takedown. 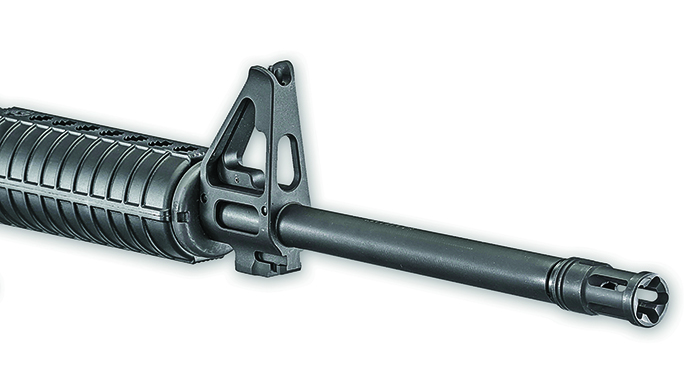 2 of 10
Ruger AR-556
Ruger equips the AR-556 with an elevation-adjustable front sight post. 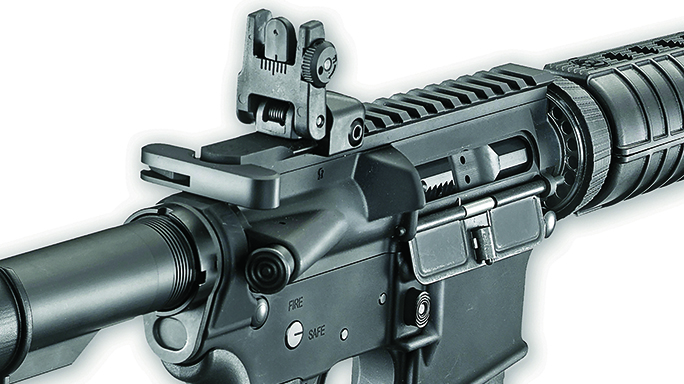 4 of 10
Ruger AR-556
The AR-556’s six-position-collapsible stock is installed on a mil-spec-diameter buffer tube. Also note the sling loop on the stock’s toe. 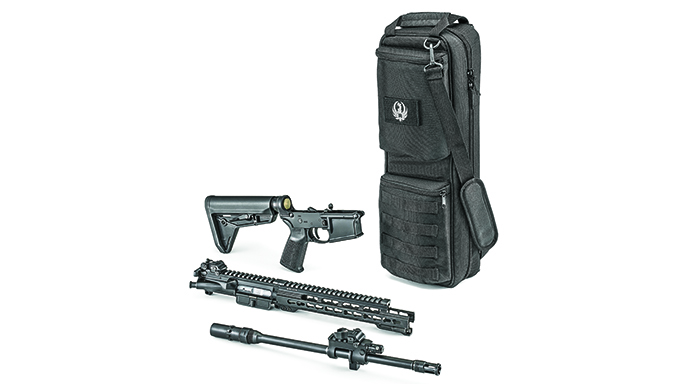 5 of 10
Ruger SR-556 Takedown
Ruger ships the SR-556 Takedown in a rugged, easy-to-carry nylon case with plenty of storage space and three 30-round Magpul PMAGs. 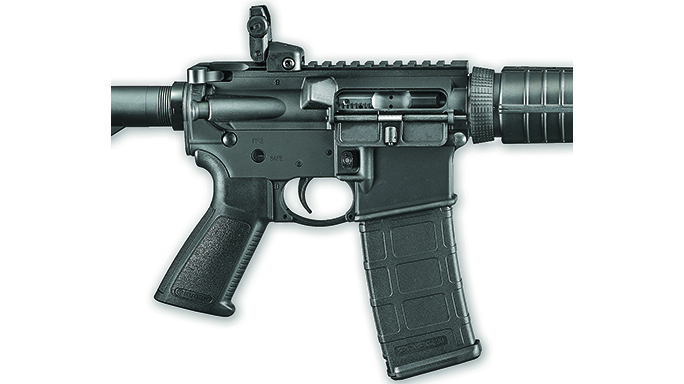 6 of 10
Ruger AR-556
Despite being so affordable, the AR-556 comes with a crisp single-stage trigger, an ergonomic pistol grip and an enlarged triggerguard. 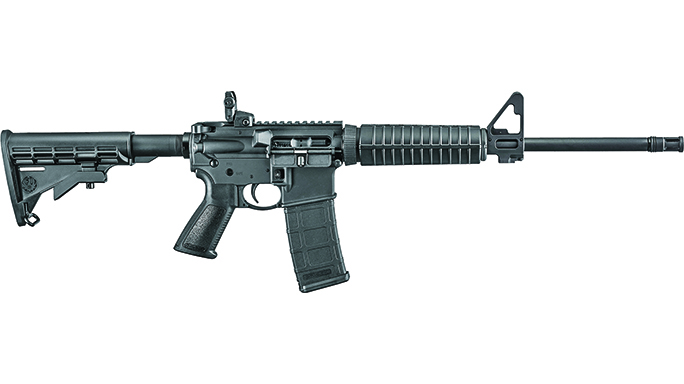 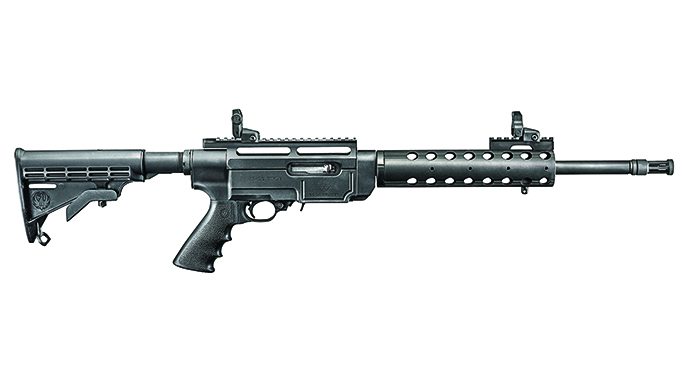 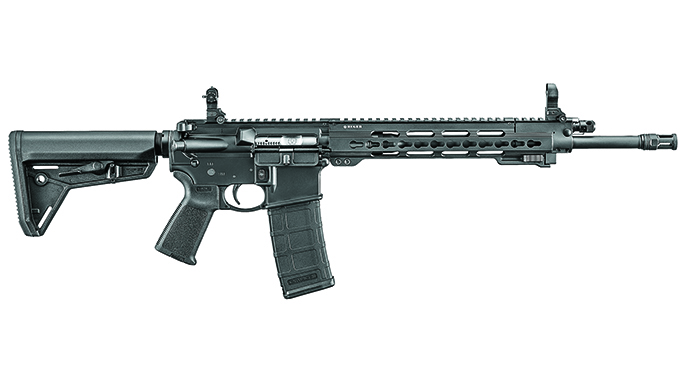 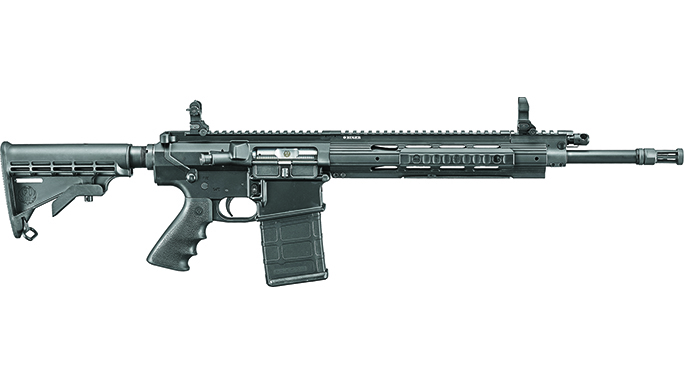 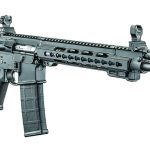 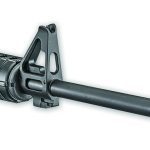 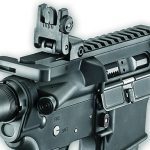 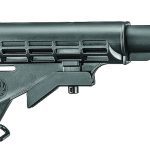 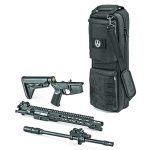 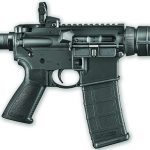 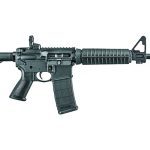 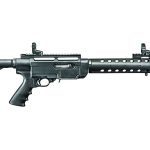 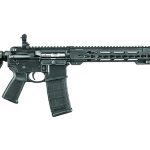 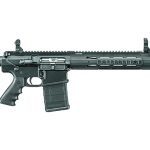 Sturm, Ruger & Company is known for producing high-quality firearms that run the gamut from rimfire target pistols and CCW handguns to bolt-action and semi-auto rifles.

When Ruger decided to enter the AR market in 2009, it did so with a rifle that uses a patented, chrome-plated, two-stage piston with a multi-stage regulator. Piston-driven ARs run cleaner and cooler, and the Ruger SR-556 soon earned a reputation for being a reliable firearm that is also extremely durable.

Since then, the Ruger AR line has evolved to include a number of rifles, including the big-bore SR-762 as well as the direct-impingement AR-556. But let’s start with one of the ARs that is perfect for covert operations.

Ruger’s SR-556 Takedown earns its name because it not only breaks down like a typical AR into upper and lower receivers, but the barrel assembly can also be quickly removed from the upper without tools. In other words, you can turn one rifle into three easy-to-stow components in seconds. But that is only a snapshot of what the Ruger SR-556 Takedown offers.

Disassembled, the three rifle components fit into a carrying case that looks like a typical knapsack for covert transport. The ease with which this AR can be disassembled also lends itself to easier maintenance—better access to the bore and gas piston system—without the hassle of removing a rail or using tools. But Ruger just didn’t settle for the takedown concept. The company took the SR-556 Takedown a step further by offering an optional barrel kit so you can swap out the 5.56mm NATO barrel assembly for one in 300 Blackout. This is true versatility in a small package.

The SR-556 Takedown disassembles like a typical AR, but, as mentioned, the barrel can be removed from the upper receiver. After ensuring the rifle is completely unloaded, remove the bolt carrier group from the upper receiver and then move the slider bar, located at the muzzle end of the handguard, toward the rear, away from the muzzle. Now you can rotate the barrel and pull it free. No tools are required to do this. It actually takes longer to describe the process than to actually perform it.

To reassemble the rifle, just slide the barrel into the upper and twist it until it locks in place. The slider bar is spring-loaded and will lock automatically. Replace the bolt carrier group, mate the upper and lower receivers like normal, and the rifle is complete. According to Ruger, the takedown mechanism provides a repeatable point of impact. But let’s take a closer look at the entire rifle.

The SR-556 Takedown is equipped with Ruger’s two-stage gas piston operating system. The stroke to operate the bolt carrier is smooth and can be felt when firing the rifle. The SR-556 Takedown also uses a 16.12-inch, precision-rifled, chrome-lined barrel that is cold-hammer forged from mil-spec 41V45 chrome-moly-vanadium steel. The barrel has 1/2×28-tpi threading and comes equipped with a Ruger flash suppressor. This standard threading makes it easy to add almost any muzzle accessory, including sound suppressors and brakes, as needed.

Surrounding the barrel and gas piston system is a slim, KeyMod handguard, and Ruger includes front and rear backup sights. Since the front sight is attached to the barrel assembly via the adjustable gas block, Ruger designed it so it is adjustable for windage and elevation, allowing it to be zeroed to the barrel. In other words, disassembling the rifle into its three main components will not impact its zero.

Ruger also decided to outfit the SR-556 Takedown with its Elite 452 two-stage trigger, which offers a 4.5-pound pull that is smooth and crisp. The fire control group also incorporates a full-strength hammer spring and a lightweight hammer that enables a 30-percent faster lock time over standard AR triggers. Magpul’s MOE pistol grip and adjustable MOE SL stock round out the lower receiver. Finally, Ruger ships the SR-556 Takedown in a carrying case with three 30-round Magpul PMAGs.

The gas piston system that Ruger created for the original SR-556 is also used to power Ruger’s big-bore AR, the SR-762 chambered in .308 Winchester/7.62mm NATO. If an AR must be called a modern sporting rifle, then the SR-762 offers everything a hunter could want—good ergonomics and a caliber suited for large game. It can also function well as a defensive or tactical platform.

The SR-762 will do just about anything you ask of it. It is equipped with a 16.12-inch barrel that is fluted for reduced weight and quick heat dissipation. The muzzle is threaded and wears a Ruger flash suppressor. The stock is a collapsible unit that can be adjusted to six different length-of-pull positions. It is attached to SR-762 via a mil-spec buffer tube.

The lower sports a Hogue Monogrip for shooting comfort and to help relieve some of the rifle’s felt recoil. The gun also features the Elite 452 trigger, backup iron sights and a round, smooth-sided, lightweight handguard with a full-length Picatinny top rail for sights and an optic. The handguard is drilled and tapped along the 3, 6 and 9 o’clock positions for mounting lights, lasers or other accessories.

The AR-556 is an affordable AR that uses the traditional direct-impingement system. Ruger packed the AR-556 with all of the features shooters have come to expect in an AR carbine, including forged 7075-T6 aluminum upper and lower receivers, a cold-hammer-forged barrel, M4 feed ramps and a carbine-length flattop.

For targeting, the rifle comes with an A2-style front sight post as well as a folding, fully adjustable rear sight. More M4-style features include a six-position-collapsible stock and polymer handguards. A single-stage trigger with an enlarged triggerguard is also built into the AR-556. Like all mil-spec ARs, the AR-556 is a good starter rifle that can easily be customized.

Think of the SR-22 as having the operating software of a Ruger 10/22 encased in the hardware of an AR rifle. This rimfire rifle offers all the legendary reliability of the 10/22 with the ergonomics of an AR—an adjustable stock, a Hogue Monogrip and a free-floating handguard. The SR-22 is equipped with adjustable flip-up sights, and it offers plenty of rail space for your favorite optics and accessories. The barrel is cold-hammer forged and comes with a Ruger flash suppressor. Finally, the SR-22 comes with the 10/22’s reliable 10-round rotary magazine, plus it is compatible with Ruger’s BX-15 and BX-25 magazines, which hold 15 and 25 rounds, respectively.

Large or small, it seems there’s a Ruger AR rifle to fit every shooter’s needs.

This article was published in ‘Black Guns’ 2017. For information on how to subscribe, visit outdoorgroupstore.com 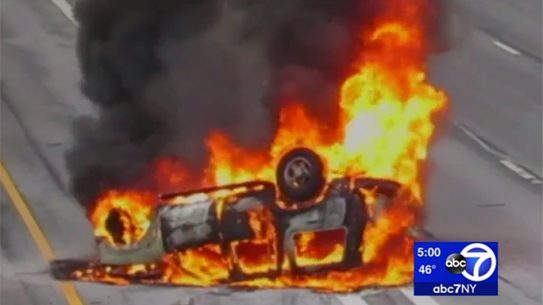 An off-duty New York Cop and volunteer firefighter are being hailed as "guardian angels"...