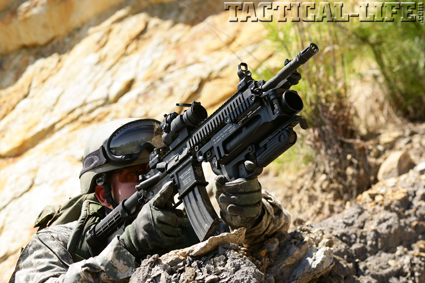 Editor’s Note: This is part of an article that will appear in the upcoming September 2009 Issue of Tactical Weapons magazine, which hits newsstands July 14. Due to its timeliness in regards to military news, we felt this article should be displayed on Tactical-life.com until the issue in which it is featured hits newsstands. On that date, this post will be pulled as a courtesy to our subscribers.

Modern 40mm grenade launchers and small arms fire illustrate the principle of synergism even better than peanut butter and jelly. Individually they are both pretty good, but when the two get together the sum is greater than the parts. Small-arms fire provides the direct-fire component and the 40mm provides the indirect fire support, a combination commonly referred to as the combined arms concept. That’s very bad news if one happens to be on the receiving end.

Following is a review of the 40mm grenade launchers that have, are or will serve with our nation’s LE officers and troops. We’ve reached back as far as Vietnam and looked at our most recent involvement in Iraq and Afghanistan to examine just what these weapons were/are designed to do and how well they’ve done. Vehicle mounted, rifle mounted or stand-alone, below you’ll find a 40mm grenade launcher to suit all tactical needs. 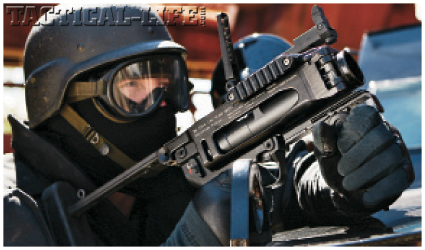 HKM320
Heckler & Koch has produced the darling of the 40mm grenade launchers. The M320 is slated to replace the M203. The M320 offers the most flexible and portable solution for employing a grenade launcher on the battlefield. The M320 mounts to an M4 or M16, or fixes to a buttstock and employs as a standalone unit. This capability enables soldiers to function seamlessly as both grenadier and rifleman, or use the M320 as a compact specialty weapon much like some SpecOps units use pistol-grip shotguns in (CQC) Close Quarters Combat.

The weapon opens to the side, and is double-action: With a misfire, the operator simply pulls the trigger again. Sights are located on the side, preventing interference with IR lasers/illuminators and other optics. 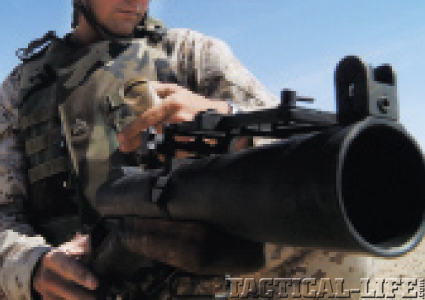 Original M79
Fielded by the U.S. Army in 1961, the M79 was our first GI 40mm grenade launcher. The M79 is a single-shot breach-loading weapon with a rifled barrel that cocks upon loading. The wood stock and barrel were not infrequently shortened by troops in Vietnam to increase portability.

The M79 had two major criticisms from troops: It was only a single-shot weapon, which made sustained fire difficult, and it required the GI who carried it to also carry a pistol or submachine gun to use when they ran out of 40mm ammo.

Even with the above criticisms, the M79 was a popular weapon with troops, earning nicknames like “Thumper” and “Blooper.” It effectively filled the gap between hand-thrown grenades and 60mm mortars and enabled squad-sized elements to carry an indirect-fire system with them on patrol—a huge benefit on any battlefield.

Under-Barrel M203
First introduced to the U.S. military in the early 1970s, the M203 continues to serve today. The M203 was designed to remedy the perceived weaknesses of the M79 and generated some of its own in the process.

The M203 attaches to the underside of either an M16 or M4 (and their variants). This allows soldiers to function as both grenadiers when required and as traditional riflemen when their specialty skills are not required. There is never a need to transition from a primary weapon to a secondary as both are always in the operator’s hands. Thus employed, the M203 corrected what was wrong with the M79.

The M203 comes with its own bag of issues, though, such as the bulk the system adds to a handy weapon like an M4. It’s easy to bump the release lever that unlocks the weapon, allowing the 40mm grenade to fall out of the weapon. It is an awkward weapon to operate.

Belt-Fed MK19
The MK 19 is also currently in service, in production since 1967. It first saw use with the U.S. Navy during the Vietnam War. It has seen use in Somalia, Desert Storm I and II and Afghanistan.

Kept clean and out of dusty environments, the MK 19 is as awesome as you’d think a fully automatic grenade launcher would be. It has an incredible ability to rain down hate and discontent.

The problem is, we are at war in two very dusty locales. The MK 19 is usually vehicle-mounted and the lead vehicle kicks up enough dust to cover its own vehicle-mounted weapon and all in the convoy. While the MK 19 is “man portable,” at just a shade over 77 pounds (minus tripod) I don’t know anybody who’s humping it very far.

My Special Forces team had these in Afghanistan. We obsessed over keeping them clean and lubed and when they worked, they were great. Because of problems we had with them, we replaced as many as possible with M2 Browning machine guns.

One of the MK 47’s features is the video sight. It has an integral laser range-finder and ballistic computer that make it difficult to miss. It is an extremely reliable and accurate package. First-round hits at several hundred meters are no problem.

My first encounter with them was in mid-2004 in Afghanistan. The MK 47, once zeroed, is as accurate as a rifle and first round hits easy. It is much more reliable when exposed to the fine dust of Afghanistan. My experiences with the MK 47 were not unique, I have heard nothing but praise for the system. Given the choice between the MK 19 and the MK 47, I’d take the MK 47 every time.

Sage International GL-1/GL-6
Sage International produces two 40mm grenade launchers designed for employment by LE or military units. The GL-1 is a single-shot breach loader that weighs a svelte 6 pounds. The GL-6 is a 6-shot revolver-type, shoulder-fired launcher weighing a more robust 11 pounds. Sage markets these chiefly to the LE community for non-lethal force engagements. Sage has developed an entire line of projectiles for these weapons, as well as others, for many different tactical scenarios.

The 40mm line of ammunition includes a kinetic-energy baton round with a polyurethane tip. The baton round is designed to impart blunt-force trauma to incapacitate the target. It is loaded to three different velocities depending on the amount of force that the operator needs. In addition to the baton round, Sage has a “super soft tip” round available in three different velocities to impart the force over a wider area. 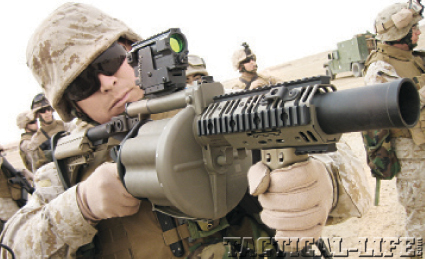 Milkor M32 MGL
Relatively new to the U.S. military is Milkor’s M32 MGL. It’s currently in limited issue with Marines—the Devil Dogs wanted more firepower than the M203 could provide for combat operations in Iraq. The M32’s advantages include a rapidly reloadable six-shot cylinder. The sustained rate of fire is 18 RPM. One operator can put significant HE power downrange in a hurry. The weapon can fire all six rounds in three seconds.

Milkor has developed more-lethal rounds for the M32. The Hellhound carries an extra helping of high-explosive goodness for whoever is on the receiving end, while the Mercury has almost twice the range of the Hellhound, capable of hitting out to 800 meters.

With favorable reports from the folks downrange, the M32 has a home with the Marines. True to Devil Dog tradition, the USMC has found a way to break more things faster than anybody else. Give ’em hell, guys.