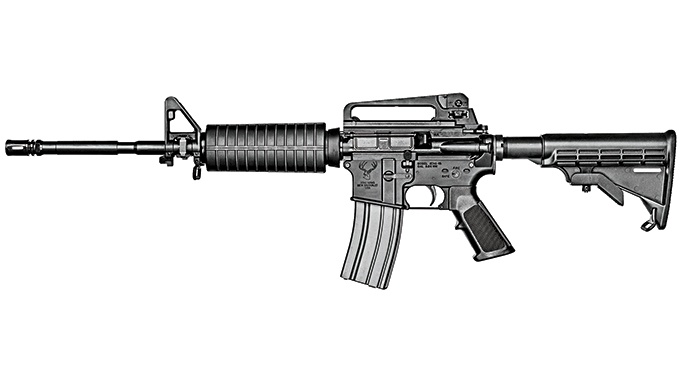 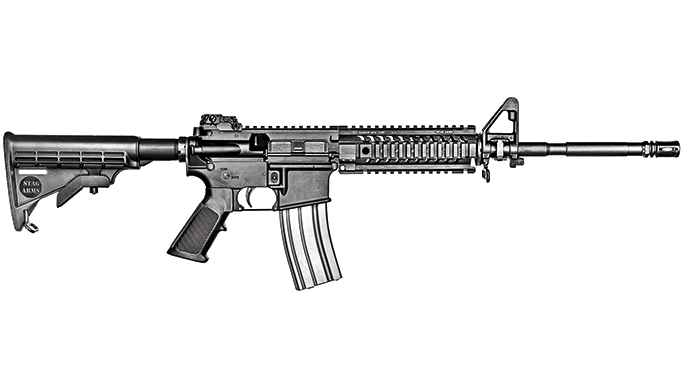 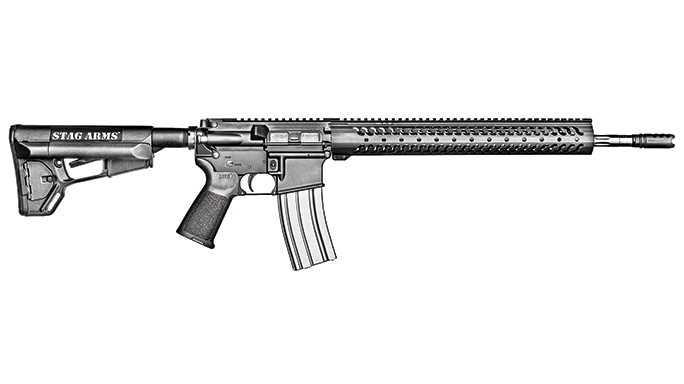 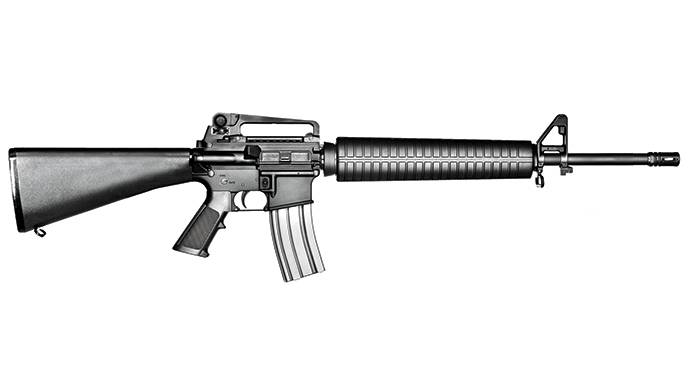 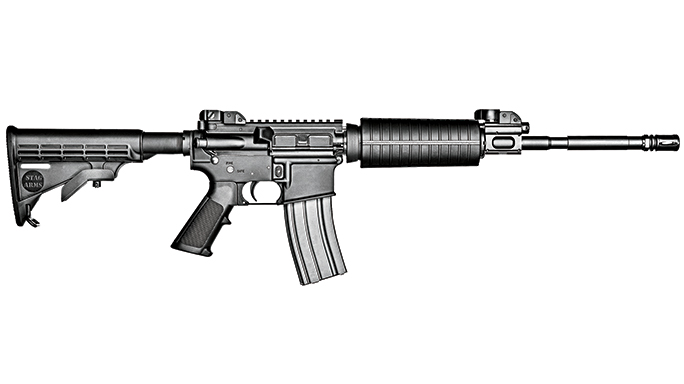 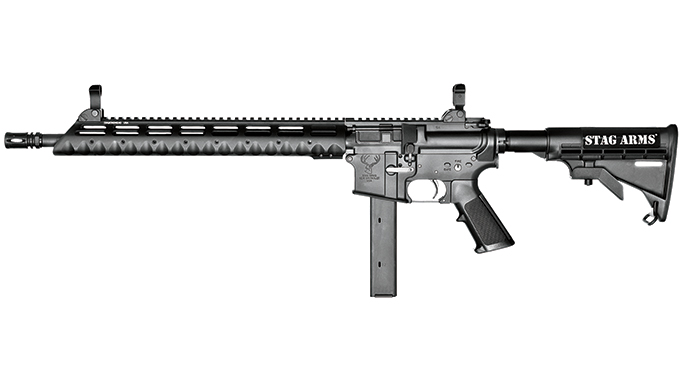 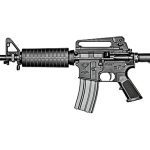 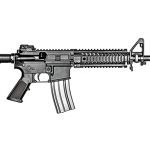 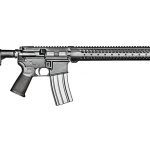 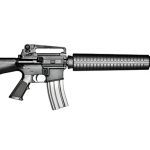 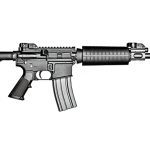 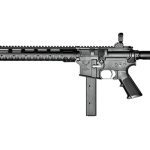 Stag Arms continues to innovate on and improve the AR rifle platform. The company’s semi-automatic Model 9T is designed to fire the 9mm cartridge, offering the familiarity of the 5.56mm AR platform with a popular and inexpensive cartridge. Pistol-caliber carbines are an American tradition with shooters who favor a long gun and a handgun that share the same caliber. A carbine chambered in 9mm means less perceived recoil, reduced muzzle blast and more accurately placed bullets downrange.

Colt has chambered ARs in 9mm since the 1980s, and still catalogues them for military and LE customers. Since then, some AR manufactures have offered adaptor kits to fire 9mm ammo through an AR platform consisting of a 9mm upper, a drop-in magazine block to make the 5.56mm mag well compatible with 9mm magazines and straight stick magazines. Early AR 9mm magazines were made from Uzi mags. Stag Arms, however, decided to build a 9mm AR from the ground up using a dedicated 9mm AR lower and upper.

The standard Model 9T and left-hand 9TL have a 16-inch, 4140 steel barrel with a 1-in-10-inch twist rate. The bore and chamber are chromed. An A2 flash suppressor is attached to the muzzle. What sets the 9T 9mm AR apart from an AR chambered in 5.56mm or any other rifle caliber is its operating system. The 9T uses a simple blowback system, not a direct impingement or gas piston system.

There is no gas block, gas tube or piston on the 9T. The bolt carrier group for the 9T is noticeably different than the bolt carrier group on a direct gas impingement system. It is heavier on the 9T than on a traditional AR-15 bolt carrier since the blowback system works off the resistance of the bolt weight and the recoil/buffer spring. The upper half of the system uses a one-piece bolt and carrier with a modified ejection port cover and an enlarged brass deflector. The lower half is also different as it uses a dedicated magazine well to accept the skinny stick magazines.

The 9T’s hammer and recoil buffer are also specially designed to work with the blowback action. Plus, the magazine catch is designed to work with the stick mags as well as standard Colt-style 9mm AR magazines; these are straight sticks using a double-stack design. The 9T’s magazine features a steel body with witness holes and a polymer follower that is molded in bright orange so you can quickly see the magazine is unloaded when the bolt is locked back. These magazines lock back the bolt when the last shot is fired.

What remains the same on the 9T are the AR platform’s controls. The safety selector, charging handle, magazine release and bolt release all function similarly to those on other AR-style rifles. Stag Arms uses a free-floating, 13.5-inch Diamondhead VRS-T modular handguard and Diamondhead’s aluminum flip-up sights. The full-length top rail offers plenty of room and options for mounting an optic. The handguard is also drilled and tapped at the 3, 6, and 9 o’clock positions so a Picatinny rail can be added for a tactical light, a vertical grip or a laser aiming device. Slots on the sides and bottom of the handguard allow ample cooling of the barrel. The six-position, adjustable buttstock is mil-spec style, as is the A2-style pistol grip.

I had the opportunity to run a 9T variant and found the carbine accurate with most any ammo I fed it. Being an AR, the rifle’s ramp up time was nil; I easily adapted to the carbine. Reloading the skinny stick magazines felt a bit odd at first, but other than that the 9T performed like I expected, albeit with less recoil, less blast and less noise.

I mounted a Meprolight Tru-Dot RDS red-dot sight on the 9T, and they seemed like a perfect pairing from the start as the RDS co-witnessed with the all-metal Diamondhead iron sights. The RDS uses a 1.8-MOA dot reticle that offers rapid target acquisition with both eyes open. The sight’s four brightness settings include three for day/night use and one for use with Gen II and Gen III NVGs as well as with magnifiers.

I also acquired three additional Colt-style magazines from Brownells to perform fast reload drills with the 9T. Brownells magazines are made with steel bodies and steel followers. They have a slick Xylan finish for smoother operation and, like the Stag Arms factory magazine, have a 32-round capacity.

Manipulating the stick magazine into the 9T’s mag well took a bit of re-learning since the magazine well is as small as a pistol’s magazine well. The beveled edges made manipulation easier, however. I pushed the magazine in and then pulled down on it to ensure it was seated. I then operated the bolt catch as I normally do.

After zeroing, I loaded all four magazines: one with Winchester 115-grain FMJs, one with Hornady’s 115-grain JHPs and the third with Atlanta Arms’ 147-grain FMJs. The fourth was loaded with a mix of ammo to see if I could slip up the 9T. Older 9mm ARs are notorious for their failures due to inferior magazines, but the Stag Arms’ magazine and the Brownells mags fed the Model 9T with absolutely no issues. The low recoil and blast was notable, and I found I could get on, and stay on, target easier with the 9T.

The single-stage trigger broke at an average of 5.9 pounds, which is a good setting for tactical use and home defense. Using a benchrest, I was able to get some 2.5-inch groups at 25 yards. The best group was with Winchester 115-grain FMJs, which grouped a five-shot group of 0.75 inches at 25 yards. Firing off-hand and for speed, I averaged 4-inch groups with all the ammo tested.

Other Stag Arms AR models are purpose-built for specific scenarios. The Model 1L can be considered a mil-spec AR for left-handed operators. The 1L is built to mil-spec standards and can be considered the civilian, left-hand-friendly version of the M4. The 1L is the mirror image of the Model 1 except the ejection port and safety are on the left side. This entry-level carbine is equipped with a 16-inch barrel with a government profile, a removable carry handle, a six-position stock, A2-style sights and a round handguard.

For home defense and LE work, the Model 2T is a pure tactical fighter that has all the goods, including a free-floating Samson Star-C handguard with quad rails that are ready for accessories like a vertical grip, a laser aiming device or a tactical light. The 2T is optics ready with backup iron sights—an ARMS #40L folding rear unit and an A2-style front sight. The mil-spec buttstock is adjustable into six distinct positions.

The 3-Gun shooter in the Stag Arms arsenal is the Model 3G. Featuring an 18-inch, free-floated, fluted, stainless steel barrel with a heavy profile and a ported 3G compensator, the 3G is built for speed and accuracy. This flattop carbine comes optics ready. Under the Samson 15-inch Evolution handguard is a full-length gas tube that produces less felt recoil for more weapon control. Other competition features include a Geissele 3-Gun trigger, a Magpul ACS stock and an MOE grip.

The Model 4 offers traditional A2 style through and through. Set up like a traditional civilian version of the M16A2 with a removable carry handle and an adjustable rear sight, an A2-style adjustable front sight, an A2 pistol grip and buttstock, a round polymer handguard and a two-stage, mil-spec trigger. A 20-inch, heavy-profile barrel is also employed, making the Model 4 an excellent choice for service rifle competition. 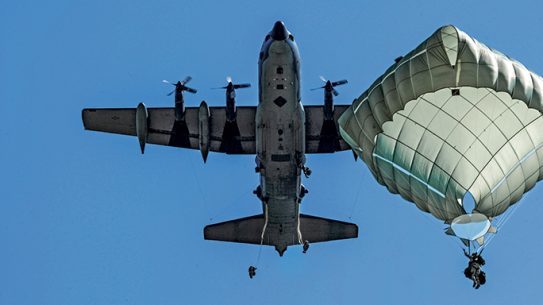