A 16 inch, 250,000 pound gun barrel that was part of the USS Missouri towered over surrendering Japanese force at the end of World War II in 1945. The gun is now on its way to its permanent home at Ft. Miles in Delaware. 93 year Georgetown resident Newt Tyndall, an Army Air Corps Colonel talks about his experience in WWII during a ceremony celebrating the gun’s arrival.

After a long journey by water and rail, a storied 16-inch gun barrel was unveiled today at the Battery 519 Museum at the Fort Miles Historical Area in Cape Henlopen State Park, where it will be stationed. The gun barrel, which weighs more than 116 tons and is 66 feet long, was salvaged from the USS Missouri, the battleship on whose deck the Japanese signed the surrender that ended World War II on Sept 2, 1945. The huge 16” gun could hurl 2,700 pound shells more than 23 miles in 50 seconds, with pinpoint accuracy in support of U.S. ground troops.

“We’re honored to have this historic gun here in Delaware,” said Governor Jack Markell. “It’s a great draw for Fort Miles tourism, which brings thousands of people to Delaware every year. This new artifact adds to our tourism arsenal and the economic boost that always accompanies it.”

This color footage of the Japanese surrender ceremony on board the battleship USS Missouri (BB-63) on 2 September 1945, was filmed by Commander George F. Kosco.

“Delaware is honored to be the new home of this significant piece of American history,” said Senator Thomas Carper. “As a major operational center of our nation’s coastal defense during World War II, Fort Miles in Cape Henlopen State Park is the perfect place to display this artifact from the U.S.S. Missouri – the ship that hosted Japan’s surrender. Moreover, this historical addition will draw even more families and tourists to the First State and our pristine beaches.” 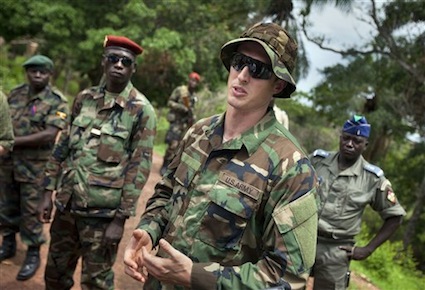 Up to 100 U.S. special forces help in hunt for warlord Kony.