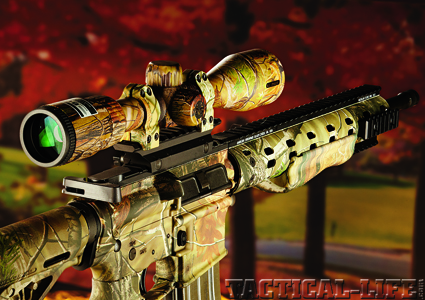 The Ambush 6.8 doesn’t have a forward assist, but because it’s meant for hunting and already very reliable, you won’t miss it

How could a rifle that was once banned from civilian sales become the most popular sporting rifle ever designed? Maybe that 10-year ban—The Violent Crime Control and Law Enforcement Act of 1994—was the trigger. Or maybe consumers finally realized that the AR-15 platform was not just a tactical weapon system, but a unique, adaptable rifle platform that is as effective in the hands of a hunter as it is in those of a soldier. Ambush Firearms is offering several rifles purpose-built with that notion in mind.

It’s funny how things change. Sometimes change comes quickly and sometimes not so fast. Consider for a moment that the M16 was adopted for military service in the mid-1960s. The AR-15, a semi-auto variant, became commercially available soon after that. However, even though the rifle was popular, it was considered mostly a fun-to-shoot rifle best suited for law enforcement or apocalyptic events. It really wasn’t until 3-Gun competitions became nationally popular and Remington introduced the R-15 in 2008 that the AR-15 platform became an accepted sporting rifle.

When that happened, firearms manufacturers began altering the platform to better suit hunters. These alterations were as simplistic as applying a camo finish to more complex builds that totally transformed the platform to a true woodsman’s rifle. Marty Daniel at Daniel Defense understands the serviceability of the AR platform as well as anyone and created an entirely new company to cater specifically to hunters. 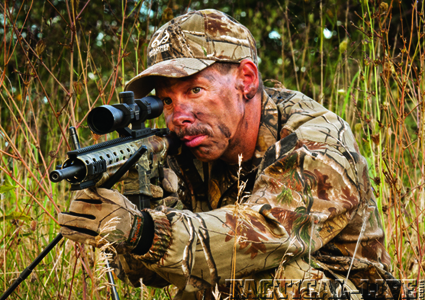 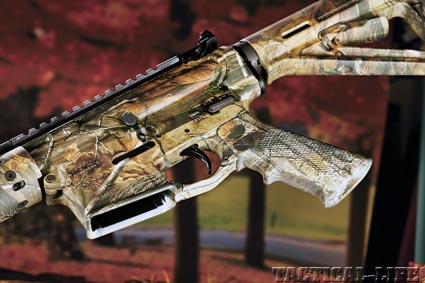 Every surface is finished in Realtree to blend in while hunting predators, hogs or whitetails. The mag well is flared for easy reloads.

Daniel Upgrade
Unable to find a rifle like he wanted on the commercial market, Marty Daniel set out to design and build his own M16 upgrades and share them with his fellow shooters. Realizing there might be a market for his designs, he began by having small batches of these products made at local machine shops and offering them for sale at gun shows. Demand quickly grew.

One of the products Daniel Defense engineered was a rail system/forward handguard made of aluminum to replace the plastic handguard that was issued to soldiers on their M4 rifles. Marty designed a rail system that allowed the barrel to float freely inside of the main tube. Without the influence of the front of the tube on the barrel, accuracy was greatly improved. This rail caught the attention of the head of the armory for the famed U.S. Army Marksmanship Unit, who ordered some for evaluation. Later that year, the U.S. Army officially adopted Marty’s rail for use on Designated Marksman Rifle platforms.

The years that followed saw explosive growth for Daniel Defense. With the success of the M4 rail, they were encouraged to bid on another opportunity to provide rail systems, and in 2006, Daniel Defense was named as the sole provider of rail systems to the most elite group of warriors in the world. The success, innovation and production did not stop there. Daniel Defense currently produces firearms and components for several other companies. Daniel Defense is now known for creating some of the best barrels for M4/AR-15-style rifles, as well as being an innovator on the cutting edge of design and manufacturing technologies. 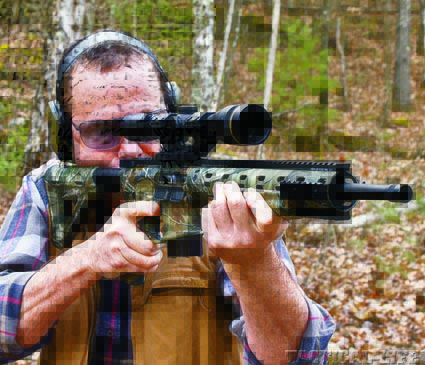 Compact and lightweight, the Ambush Firearms 6.8 is configured perfectly as a hunting version of a rifle built on the AR-15 platform.

Getting Ambushed
Ambush Firearms’ Ambush 6.8 is indeed a hunting rifle. It is chambered for the first commercial cartridge to truly carry the AR-15 platform over to the hunting market. The original AR-15 cartridge, the .223 Remington/5.56mm NATO, will push a 55- to 60-grain bullet to about 2,900 FPS (feet per second) from a 16-inch barrel. This will deliver in the neighborhood of 900 FPE (foot-pounds of energy) at 100 yards. The 6.8 Remington SPC cartridge—developed by Remington in cooperation with the U.S. Special Operations Command—will push a 115-grain bullet to 2,500 FPS from a 16-inch barrel and hit 40 percent harder at the same distance.

Aside from chambering the Ambush 6.8 in a more potent cartridge, Ambush Firearms has tricked-out this rifle so that it is perfectly configured for the hunter who wants to pursue anything from varmints to deer with the same rifle.

Ambush Firearms started with a Daniel Defense lower and upper and attached a Modular Float Rail (MFR) handguard. The aluminum handguard allows the barrel to free-float over its entire length and is perforated with ventilation cuts to reduce weight and allow for barrel cooling. At the front of the handguard, on each side and the bottom, there are 3-inch sections of Picatinny rail that are held in place by screws. This allows the attachment of various accessories like a flashlight when hunting critters at night.

The top of the upper receiver has an integral section of Picatinny rail that mates perfectly with the integral rail on the handguard. This provides you with 18.25 inches of uninterrupted rail with 42 slots. The beauty of this system is that it will allow you to position standard optics, night-vision scopes and even iron sights or combinations of all three in just about any configuration a shooter may prefer. 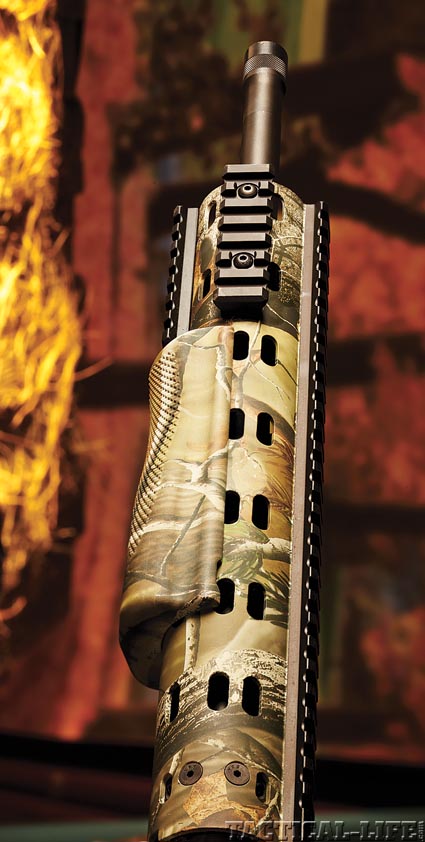 The Modular Float Rail allows shooters to position 3-inch rail sections wherever they choose. The molded handguard cover is another nice hunter-friendly feature.

Inside the MFR handguard is the free-floated, 16-inch barrel, which is also manufactured by Daniel Defense. It has a mid-length gas system and is capped off with a threaded muzzle that is hidden behind a knurled, threaded cap, which also serves to protect the crown of the barrel. If you are interested in attaching a suppressor, all you will need to do is unscrew the cap and screw on the suppressor. On the underside of the handguard, there is a very simple but much appreciated attachment that greatly enhances the feel of the rifle in your hand. This polymer handhold is slightly tapered and resembles a standard sporting rifle forearm. It also allows you to provide some additional rearward pressure on the rifle with your support arm without the common and more tactical vertical foregrip.

Ambush Firearms chose a Geissele Super Semi-Auto two-stage trigger for this rifle. According to my trigger pull gauge, the Geissele trigger broke at an exceptionally crisp 4.25 pounds after pulling through the 2-pound first stage. This is an excellent trigger, which, in my mind, is well tuned for hunting. Ambush Firearms should be commended for including a good trigger on an out-of-the-box AR-15-style rifle.

Aside from the Realtree AP camo finish and the absence of a forward assist, this rifle resembles your common AR-15-style carbine. It has a six-position collapsible stock, a brass deflector, a dust cover, a left-side-mounted two-position thumb safety and an A2-style grip. 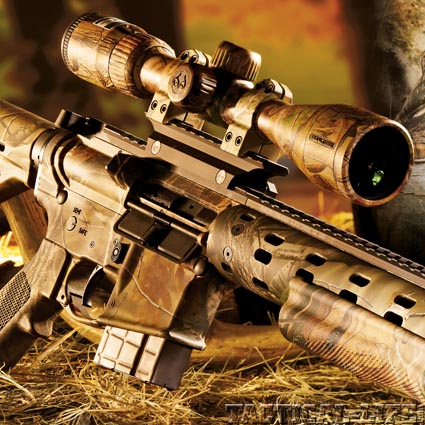 Instead of just taking an AR and dipping it in camo, Daniel Defense created an entirely separate company, Ambush Firearms, run by and devoted to hunters.

Ambushing Paper
For accuracy and function testing, I rounded up three factory 6.8 SPC loads—two from Remington and one from Hornady. I had a total of 120 rounds and fired every single one of them. While firing from the second magazine, I had one stoppage when the second round became askew in the magazine. The magazine, which was manufactured by PRI Mounts, was a bit sensitive to loading and the malfunction may have been, at least partly, a product of operator error. After that incident, I was more cautious about filling the magazine and no additional reliability issues were encountered.

From the bench, the rifle delivered plenty of accuracy for hunting at any range for which the cartridge should be used. The Hornady load performed the best, averaging 1.5 inches for three 5-shot groups, and turned in a smallest group of 1.4 inches. The rifle had no love at all for the Remington UMC load and both Remington loads exhibited pretty wide velocity swings as well. On the other hand, the velocities from the Hornady load were very consistent.

About six years ago, it hit me how well an AR-15 with a collapsible stock is suited to young shooters. It is not overly heavy, recoil is minimal, and the stock can be positioned so that it fits most kids. It’s true that the 6.8 SPC will have more recoil than a .223 Remington, but the AR-15 platform, with its buffer assembly, does a good job of mitigating that recoil. My gun-writing assistant, who is now 12 years old, didn’t even bat an eye when pulling the very fine trigger on the Ambush 6.8.

It would be hard to imagine how an AR-15 might be better configured for hunting. Understandably, the AR-15 has sort of become the 1911 of rifles and this means that everyone has a slightly different take on what makes one “best.” And I’m sure that those who buy an Ambush 6.8 might change the grip or stock, and they might even remove the neat forward grip on the handguard. To each his own. But none of that changes the fact that the Ambush 6.8 is a reliable, woods-ready rifle. For more information, visit ambushfirearms.com or call 855-262-8742. 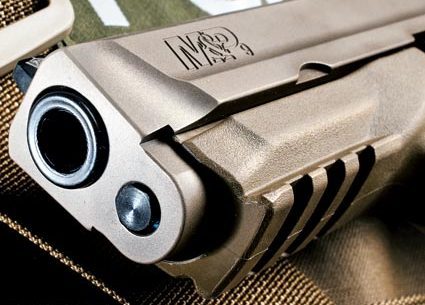 The Ambush 6.8 doesn't have a forward assist, but because it's meant for hunting…