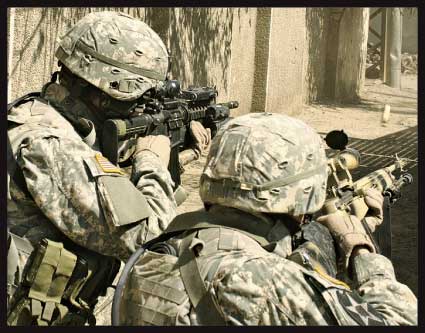 In 1957 the U.S. Army solicited commercial assistance to develop a 5.56x45mm chambered military rifle. As a result, Eugene Stoner and ArmaLite designed and built a lightweight, powerful, small-caliber shoulder weapon. The U.S. Army, looking ahead to a jungle war in southeast Asia, picked the lightweight design to equip their new, highly mobile soldier. However, the U.S. Army did not fully adopt the specific design requirements that made the original AR-15 operate effectively. No one recognized that the ball powder substituted by the Pentagon had a greater fouling effect on the AR bolt assembly and chamber area. In addition, troops were not properly trained on how to clean their new rifles. The result was a weapon that was susceptible to jamming in the field; and this was the catalyst for the black rifle’s bad reputation.

Today’s Warriors Needs
The poor initial performance, together with the marginal incapacitating ability of the 5.56 round, started the doubts of the Stoner design that linger today, even though the weapon and caliber have both evolved substantially. However, battlefields change over time. The mobile warriors of today are frequently getting in and out of vehicles and need a weapon of shorter length. The loss of active barrel length in the M4 further cuts the overall effectiveness of particular loads of the 5.56 round that many already considered to be too small and weak.

Of significant note, recent efforts were undertaken by both military and civilian manufacturers to develop a round for the AR platform that could bridge accurate lethality and shorter barrels. Two different approaches were developed: the 6.8 SPC (Special Purpose Cartridge) and the 6.5 Grendel (see sidebar). 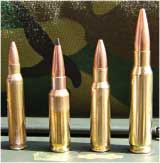 Testing & Evaluation
In order to consider these potential replacements for our longest-serving battle rifle, we obtained product from modern manufacturers of weapons, ammunition and sighting systems. Included in our test are Alexander Arms’ 6.5 Grendel rifles, LWRC 6.8 SPC carbines, LMT (Lewis Machine and Tool) 6.8 SPC with their CQB monolithic rail. We worked with U.S. Optics SN-12, Trijicon’s ACOG and Aimpoint’s M3 with 3x magnifier.

Lethality, Penetration and Accuracy
Both the 6.8 SPC and 6.5 Grendel have a greater potential for immediate lethality than the 5.56, based on their heavier bullet traveling at a comparable speed. Shots taken at distances ranging from 50 to 75 yards with the 6.5 Grendel at medium-sized wild hogs produced many first-round lethal hits, as well as immediate incapacitation. The tough hogs were dressed to examine the wound channels. The tissue damage was noted to be extensive, with the 6.5 Grendel literally “shredding” the torso. The bullets did not exit but fragmented during passage through the tissue. Targets of both cold-rolled and Brinell AR 500 steel were engaged by the 6.5 Grendel and 6.8 SPC, as well as a control group of 63-gr. 5.56x45mm M855 green tip and 168-gr.

Hornady .308 Win Match ammo. None of the ammunition was loaded with projectiles specifically designed to be armor piercing.

The accuracy of 6.5 Grendel and 6.8 SPC was excellent. The groups for each caliber met or exceeded previously published data. The ability to stay on target during full-auto fire was achievable, and far exceeded any similar .308-caliber weapon on hand for controllability. Our overall conclusion is that both the 6.5 Grendel and 6.8 SPC demonstrate superior effectiveness when compared to the 5.56 in this manner, transferring more energy using a larger, purpose-formed bullet. However, at longer ranges the resulting wounds would be similar to a low-velocity non-expanding bullet impact.

The 6.8 SPC is a purposeful and well-engineered combination of velocity, accuracy and reliability for combat engagements up to 500 meters. With a trajectory very similar to the .308 WIN, the 6.8 SPC provides almost 50 percent more downrange, terminal-energy than the 5.56 NATO at 100-200 meters. However, at distances greater than 400 yards, performance of the 6.8 SPC is inferior when put up against the .308 Win or the 6.5 Grendel.

The 6.5 Grendel bullet is designed for energy retention during flight and has about twice the mass of the 5.56 NATO, with ballistics far, far superior to the soviet-era 7.62×39 mm round. It maintains a devastating impact on tissue at longer ranges. The flat-shooting round has demonstrated one MOA (minute-of-angle), accuracy beyond 600 meters, where the performance of the 6.8 SPC falls off.

Personal Preference
Overall, both the 6.5 Grendel and 6.8 SPC offer similar hard-hitting short-and-intermediate range performance with .308 accuracy, out to intermediate ranges. The 6.5 Grendel has the edge past 600 meters. Given a choice, I would take the better ballistic bullet of the 6.5 Grendel, which has incapacitating lethality for most tactical situations from CQB to out beyond 600 meters. However, the logistical support for the 6.5 Grendel and 6.8 SPC has been inconsistent, as many shooters, both military and civilian mention issues with the availability of both cartridges. In addition, the demonstrated ability of the 5.56 green tip to penetrate light armor and steel plate better than the 6.5 Grendel or 6.8 SPC will be of interest to operators who might have to take on technicals when under fire.

The latest news is that the U.S. Army is not going to throw the 5.56×45 NATO round under the bus anytime soon. Although no single caliber will provide the operator with a solution to every tactical problem, many warriors interviewed would still take the M855 5.56 due to overall satisfactory performance and ammo availability. One of the important aspects of “is the M4 good enough?” argument is to ensure that the “real” trigger-pullers have the loudest voice and overriding opinion about what works in the field. To those warriors, I say Godspeed and thanks for the freedom we all enjoy.

Why replace the 5.56 NATO?
Results from official studies and two generations of GI’s bitching defined the need to improve on the lethality and range of the 5.56mm NATO round. The 5th Special Forces group at Ft. Campbell, together with the U.S. Army Marksmanship Unit at Ft. Benning, evaluated various calibers and concluded that the 6.8 SPC provided the best combination of accuracy, velocity and transferred energy, delivering twice the kinetic energy at longer ranges than the 5.56 NATO.

How much better are the rounds compared to the 5.56 NATO?
The only method to incapacitate opposing combatants is the effective shot placement and ability of the bullet to transfer its energy by disrupting the tissue (usually by yawing or fragmenting). The 5.56 bullet is traveling more than 2,700 fps to upset tissue, and that happens after 5 inches of penetration. However, the military has proven that 6.8 SPC bullets upset within the first 1 to 2 inches of contacting the target.

What do I need to replace on my AR?
The lower receiver is totally compatible. The replacement parts for the upper consist of only the barrel assembly, bolt assembly and magazines. A 6.8 SPC bolt will work in a standard bolt carrier and uses the same firing and cam pin. A really nice side note is that all the SOCOM impedimenta (sighting systems, lights, and bipods) that you already have for your current AR can be transferred on the other upper.

Will my AR magazines work?
Just the spring. Everything else is unique. That includes the body and follower, so the feeding arrangement is different. That does not say that the current 5.56 magazines will not hold and feed a few rounds of 6.5 Grendel or 6.8 SPC ammo—just expect bulges in the magazines and feeding problems if you try.

Where can I get ammunition?
Companies that manufacture 6.8 SPC ammunition include Black Hills, Hornady, Remington and Silver State Armory, while the 6.5 Grendel is loaded by Alexander Arms and Wolf. Silver State and Alexander Arms supplied us with the ammo for testing and we did not have one failure to feed or other ammunition-related malfunction.