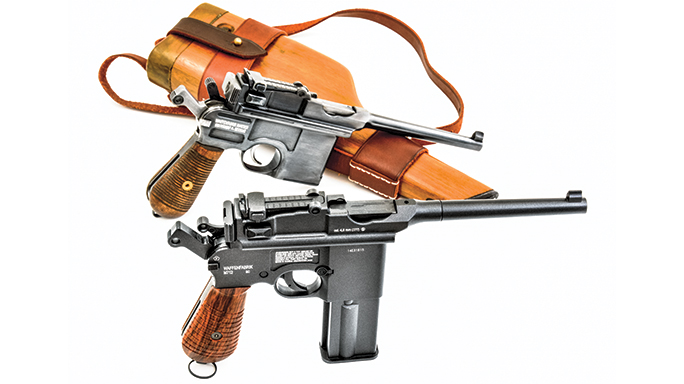 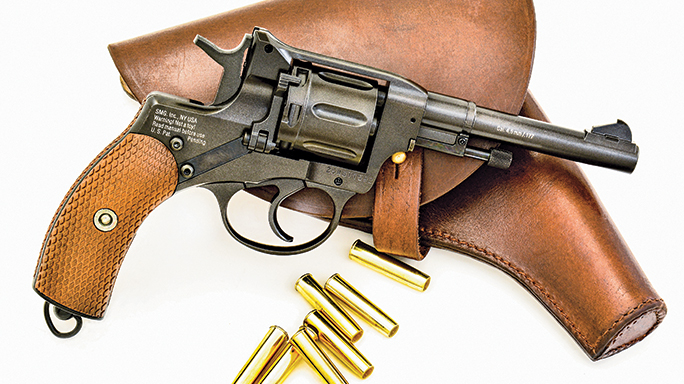 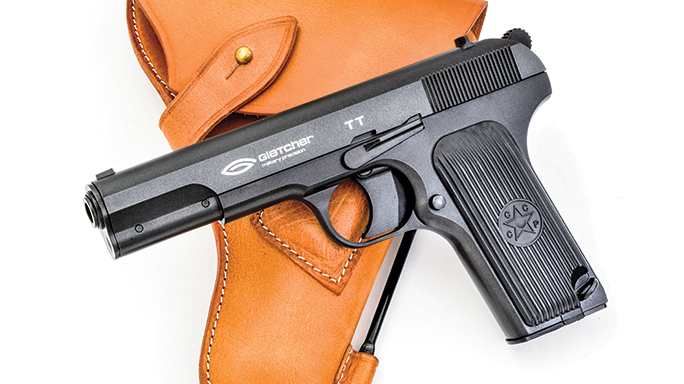 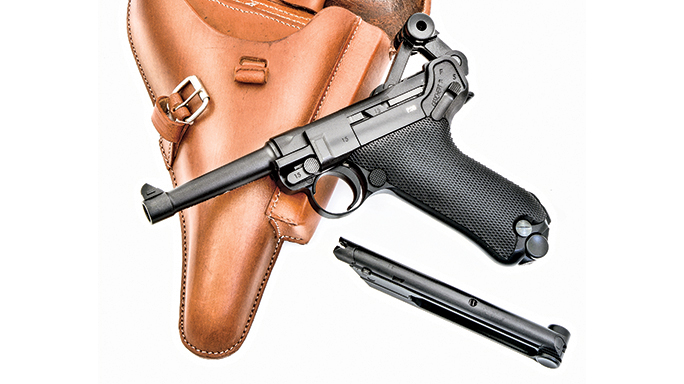 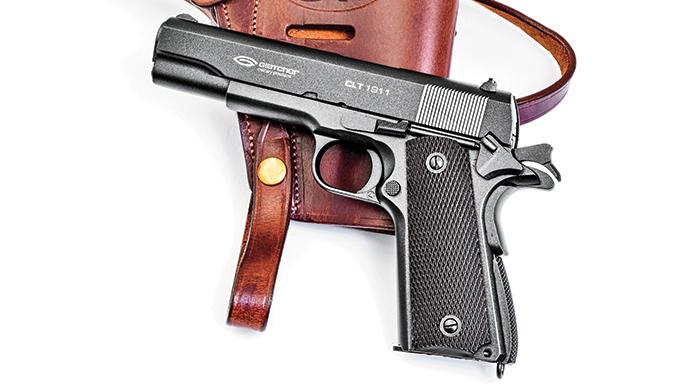 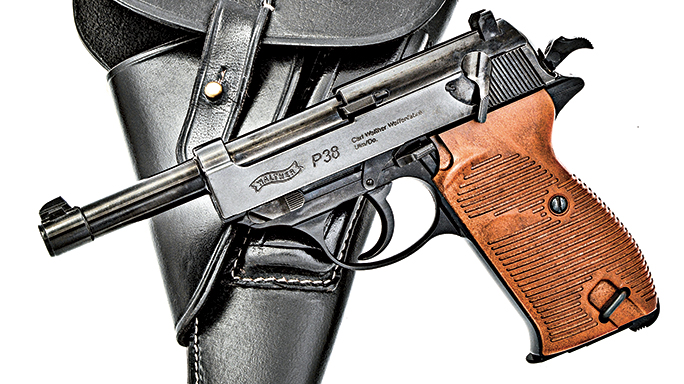 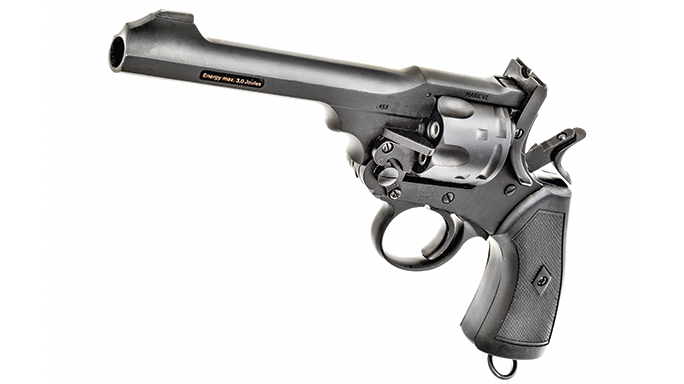 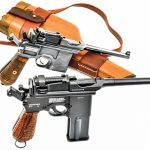 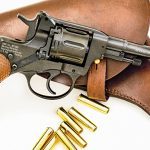 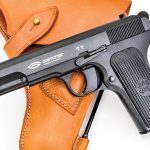 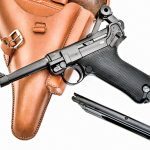 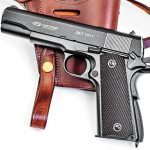 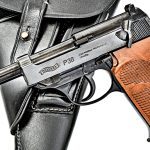 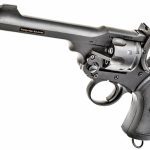 It’s hard to imagine that these different guns from different eras, even from different centuries, all came together in one time period, but during World War II this unlikely convergence of arms did in fact take place. Even today, after more than 70 years, there remains an almost inexplicable attraction to these assorted military revolvers and pistols.

Aside from the Colt Model 1911, most are of foreign origin, including the Broomhandle Mauser; the British Empire’s venerated .455-caliber Webley Mk VI revolver; the Belgian-designed Nagant seven-shot revolver carried by Russian soldiers in two World Wars; the 7.62mm Tokarev TT semi-automatic that succeeded it; and, lest we forget, two of Germany’s most famous WWII sidearms, the Luger P.08 Parabellum and the Walther P.38. These have all been faithfully recreated today as high-quality, .177-caliber air pistols.

In recreating these historic handguns as air pistols, manufacturers like Umarex, for example, which has its Legends line with the Mauser M712 selective-fire Broomhandle, the Luger P.08 and the Walther P.38, eschew the use of plastics by using all metal components to provide durability, accurate styling, the proper weight and methods of operation. Here are some of the best replica air pistols currently available. (Holsters courtesy WorldWarSupply.com)

The Umarex Legends Broomhandle Model 712 air pistol is perhaps the most remarkable and desirable of all World War-era air pistols. The Broomhandle is an invention of the late 19th century. Among the very first semi-automatic pistols, the Broomhandle was patented on December 11, 1895. It used a locked-breech design with a rectangular bolt housed inside the square section of the barrel extension. Among many unprecedented features, the Mauser Broomhandle introduced a device to keep the bolt locked back after the last shot had been fired, thus indicating an empty magazine and automatically preparing the gun for quick reloading.

A manual safety on the left-rear of the frame was actuated by pushing the lever upward into a notch, which either locked the hammer so that it could not be cocked, or if cocked, blocked the hammer. There was also a wooden shoulder stock with a steel yoke that mounted into a channel in the gripstrap, making the Mauser into a modest carbine pistol. The hollow shoulder stock also doubled as a holster worn in a leather shoulder harness.

The Model 712 (Model 1932 or Schnellfeuer) used a removable box magazine and could be fired in either semi-auto for full-auto. The Model 712 has been faithfully reproduced right down to the select-fire control switch on the left side of the frame. The Umarex gun is so exact in detail that a classic Mauser wooden shoulder stock/holster will fit it.

Developed in Belgium in 1895, the Nagant revolver was one of the most advanced designs of its time. Designed by Leon and Emile Nagant and manufactured at their armory in Liege, Belgium, the brothers were already famous for the 1891 Mosin-Nagant rifle. Adopted as the standard issue handgun for the Russian Army, the seven-shot 7.62mm Nagant was also carried by Russian police and the KGB.

Earning the trust of Russian soldiers during WWII, the original 7.62x25mm Tokarev TT (adopted by the Red Army in the 1930s) grew in popularity because of its power and reliability. Gletcher’s CO2-powered TT pistol was designed for simplicity, power and precision, just like the original Tokarev TT-33. A metal body, a powerful blowback action and a functional hammer give this air pistol a realistic feeling in the hand.

The Gletcher Tokarev TT pistol is fitted with a smooth trigger pull for accuracy, and the magazine holds 18 .177-caliber BBs. Powered by a 12-gram CO2 cartridge concealed in the pistol grip, the TT delivers an average velocity of 361 fps. The rubber grips provide a firm grasp for shooters with or without gloves. The pistol’s weight, at 21.92 ounces, and its ability to fit aftermarket Tokarev holsters add to its authentic feel.

Exhibiting impressive authenticity, the Umarex Legends P.08 uses a detachable box magazine that contains both the 12-gram CO2 capsule and a charge of 21 steel BBs, allowing for additional magazines to be carried for a quick and authentic reload. The air pistols operate exactly like the original via a blowback toggle action. All-metal construction provides the weight (32 ounces) and heft of a real P.08 semi-auto. Originally developed in 1898 and put into production in 1900, the cartridge-firing P.08 is another of the earliest semi-auto designs that saw use in both WWI and WWII. It is also one of the most recognized handguns in the world. These superb reproductions do Georg Luger proud.

Currently one of the most authentic .177-caliber copies of the 1911A1 carried by U.S. forces during WWII, the Gletcher CLT 1911 features authentic blowback action, a 1911A1-style hammer, a small thumb safety, a lanyard loop at the bottom of the magazine well, checkered grip panels, a grip safety and an arched mainspring housing.

Weighing 31.68 ounces (lighter than a real 1911A1), the Gletcher model uses a Colt-style magazine that carries both the CO2 capsule and BBs for authentic reloading. The pistol’s design delivers shooters an average downrange velocity of 328 fps. All features are as close to original in operation as possible, right down to racking the slide to chamber the first round.

One of the most famous 9mm pistols of all time, the P.38 was originally developed by Walther in 1935 as a prototype design. The final version was put into production in 1938 as the Pistole 38 or Walther P.38. Featuring a recoil-operated, locked-breech design, it had a short, open-top slide and double-action operation, the latter being a first for a 9mm semi-auto military handgun.

The Umarex Walther P.38 is a 20-shot BB pistol with an authentic blowback action. Although not a DA/SA like the original, the all-metal, SA air pistol can deliver its rounds at an impressive velocity of 400 fps. This Umarex air pistol is highly authentic in its appearance, dimensions and original markings.

The Webley Mk VI is manufactured to exacting specifications by Webley & Scott, a company steeped in its own storied air pistol history dating back to the early 20th century. The original Webley Mk VI self-extracting revolver was used by British troops throughout WWI and WWII. The Webley was distinguished by its 6-inch, flat-sided barrel, its large hammer spur, copious triggerguard and large, crescent-shaped DA/SA trigger.

A man-sized handgun overbuilt to endure, it used a massive “stirrup latch” to release the barrel and cylinder assembly, allowing it to be tilted downward like the old S&W top-break revolvers. Opening the Webley activated an automatic ejector working off an external cam lever on the left side of the frame. This drove the cylinder arbor and extractor upward and simultaneously expelled all six shell cases.

All of these features are accurately reproduced from original blueprints in the Webley Mk VI air pistol, with the exception of completely ejecting the unique .455-caliber BB cartridges, which can be reloaded and used repeatedly. Weighing in at 37 ounces, measuring an exact 11.25 inches in length and 5.75 inches in height, the Mk VI air pistol is as close to the original Webley revolver as possible. 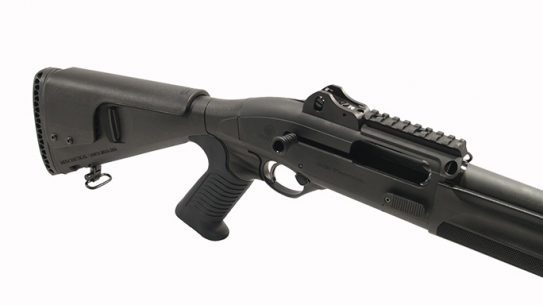 The Urbino Pistol Grip Stock from Mesa Tactical is made from injection-molded glass-filled nylon...