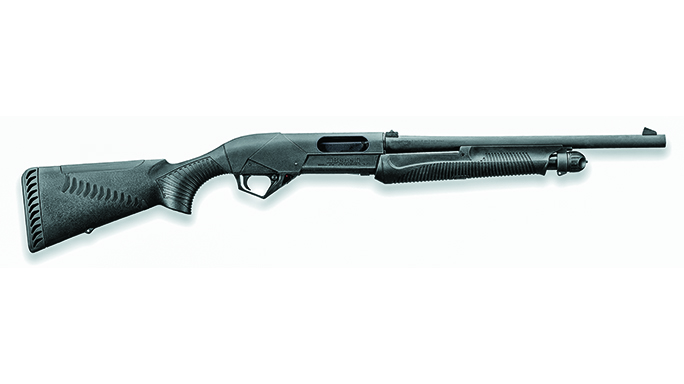 1 of 8
Benelli Super Nova Tactical
Benelli Super Nova Tactical: Weighing just over 7.5 pounds, the Super Nova Tactical can be had with a pistol grip or Benelli’s ComforTech buttstock, which has an innovative design incorporating gel pads and synthetic chevrons to reduce recoil by some 48 percent. This translates to fast follow-up shots and increased accuracy. Shooters can also choose between ghost-ring or open rifle sights, a special rifled slug barrel or extended special-purpose chokes. Standard features include a drilled and tapped receiver for Weaver 423M base, an ergonomic triggerguard and a push-button shell stop. 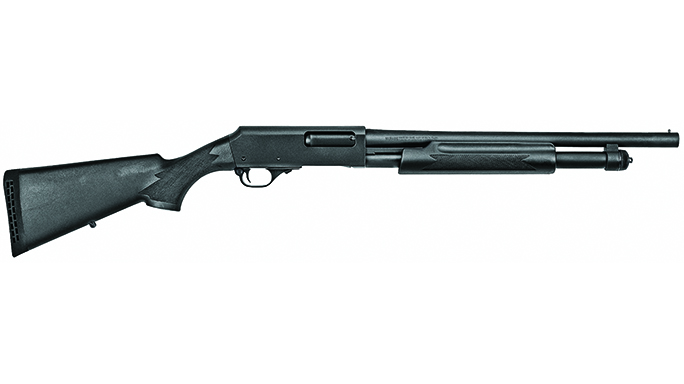 2 of 8
H&R Pardner Pump Protector
H&R Pardner Pump Protector: Harrington & Richardson (H&R) has been a part of the firearms world since 1871, and it currently offers several pump-action shotguns to suit a variety of needs. The Pardner Pump Protector has a steel receiver that’s drilled and tapped for a scope base, and dual action bars for rugged reliability. The black synthetic stock comes with molded-in checkering on the pistol grip as well as a ventilated buttpad to help absorb recoil. The forend has matching checkering, and sling swivel studs are included. This is a very affordable option that should live up to H&R’s reputation. 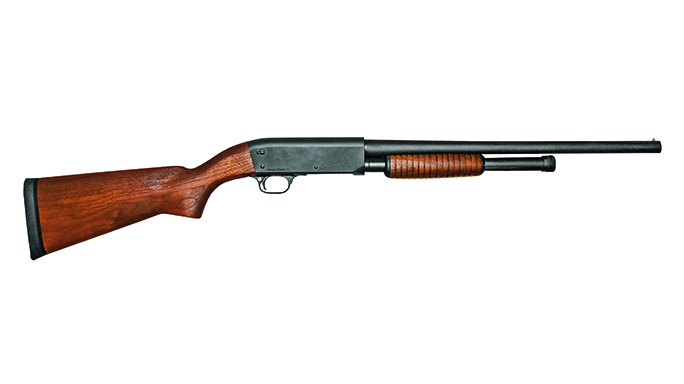 3 of 8
Ithaca Model 37 Defense Gun
Ithaca Model 37 Defense Gun: Famous for shotguns, the Ithaca Gun Company has made a smoothbore that’s been a police staple for almost 70 years. The Model 37 was based on a Browning design, and in the past it has equipped such agencies as the LAPD and NYPD. It’s one of my personal favorites, and I’ve logged quite a few miles with one in my patrol vehicle. It has a single action bar but seems to function on par with any other pump gun I’ve used. One unusual feature is the solid receiver, which only has a bottom port for loading shells and ejecting empties. Currently, Ithaca offers the Model 37 Defense Gun with either a synthetic or walnut (shown) stock. 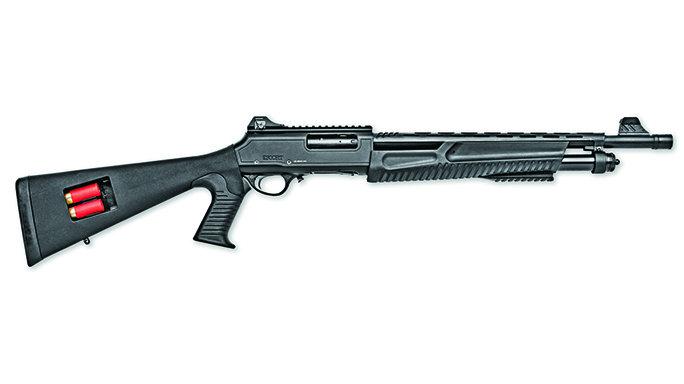 4 of 8
Legacy Sports Escort MP Tactical
Legacy Sports Escort MP Tactical: For a reasonably priced pump gun for LE or defense use, Legacy Sports International offers the Escort MP Tactical. It has a host of features usually only found on higher-priced models, including an adjustable ghost-ring rear sight, a fiber-optic front sight and a tough synthetic stock with a fully padded pistol grip, a built-in two-shell carrier and a low-density recoil pad. Two rails are included on top of the receiver and on the bottom of the forend. The receiver is made of aircraft-grade aluminum alloy, and a single-shot magazine cutoff is included. The 3-inch-chambered barrel comes with a muzzle brake, and the entire gun has a durable matte black finish. 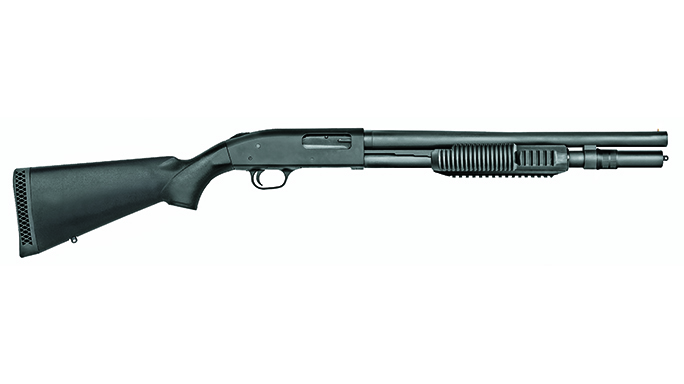 5 of 8
Mossberg Model 590A1 7-Shot
Mossberg Model 590A1 7-Shot: The oldest family-owned gun company in the U.S., O.F. Mossberg & Sons has been cranking out firearms since 1919. Its Model 500-series shotguns have equipped many cops and soldiers over the years. One I’ve had experience with is the Model 590, and the newest version for 2016 has an 18.5-inch barrel with a full-length, seven-shot magazine. The Model 590A1 7-Shot also has a synthetic buttstock, and the forend is ribbed and fitted with accessory rails for lights, lasers and other accessories. One feature I’ve always admired in Mossberg pump shotguns is the location of the safety. It’s mounted on the tang for easy operation for both right- and left-handed shooters. 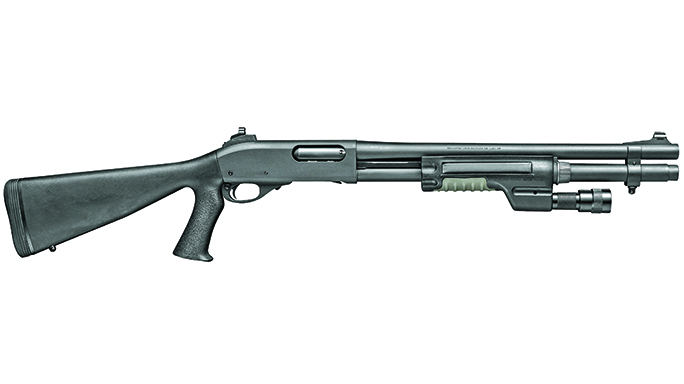 6 of 8
Remington Model 870P MAX
Remington Model 870P MAX: Mention a police shotgun and the Remington Model 870 instantly comes to mind, as it’s used by more LE agencies than any other brand of pump shotgun. From a simple “riot gun” with a short, open-choked barrel and bead front sight, like the Synthetic Tactical or Hardwood Home Defense models, to the advanced 870P MAX, with its Davis Speed-Feed pistol-grip stock, SureFire forend/light and Wilson Combat XS sights, Remington has you covered. The Model 870 platform features non-binding twin action bars and a rugged receiver with a bottom loading port and a side ejection port. 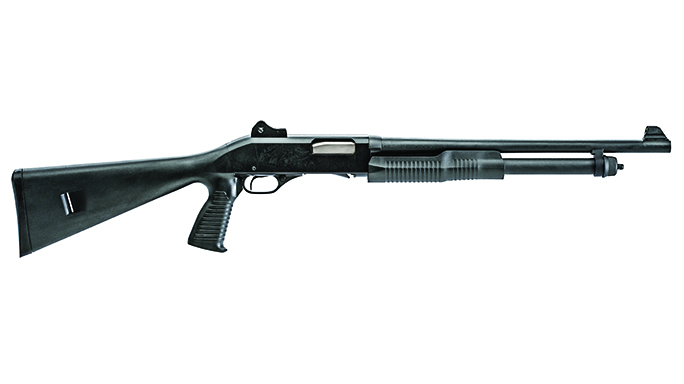 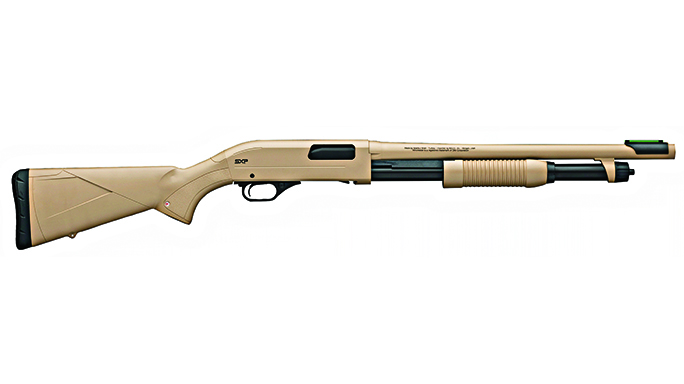 8 of 8
Winchester SXP Desert Defender
Winchester SXP Desert Defender: Having been in the slide-action shotgun business for some 123 years, Winchester is very well known in the field of military and police scatterguns. From the Model 97 “trench gun” of World War I to the Model 12 and more modern incarnations used by law enforcement officers stateside, Winchester has earned its reputation for reliability. Today, the company offers the SXP with an inertia-assisted action that makes it the fastest pump gun in existence. The high-strength aluminum receiver encloses a rotating, four-lug bolt that’s chrome plated for smooth functioning. The bore and chamber are also chrome plated, and several exterior finish options are available, including desert tan. 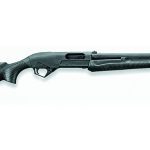 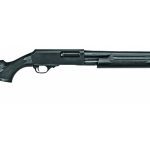 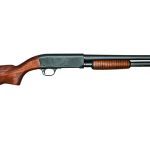 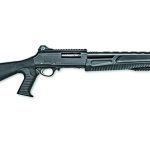 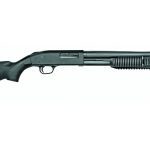 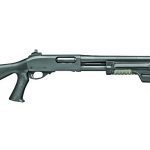 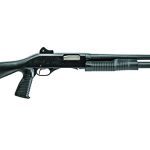 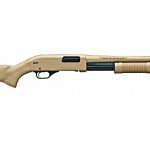 Slide- or pump-action shotguns have been around for over 160 years. The first patent for such a design was issued in Great Britain in 1854. Scatterguns have been popular for “social purposes” in the United States since the frontier days, when lawmen regularly carried smoothbore double guns in pursuit of the “bad guys.” In the later part of the 19th century, lever actions and then pump-action shotguns came onto the scene.

One of the first successful versions was the Winchester Model 1893—invented by John Moses Browning—which was later improved to become the Model 1897. This rugged, exposed-hammer pump action was produced for 60 years. Marlin followed suit in 1898, Stevens in 1909, Remington in 1910 and Ithaca in 1937. Pump guns were popular back then because they are mechanically operated by the physical force of the user—an important factor in the days of paper-hulled shotshells.

Even though semi-automatic shotguns have made big inroads in the LE market in the past several decades, the ever-reliable pump action still tops the list for many American and foreign agencies. There’s definitely something to be said about the intimidating, universally recognizable sound of a shell being pumped into the chamber. So, without further ado, let’s take a look at some of the most popular pump-action shotguns in law enforcement, security and self-defense configurations today.

For more information on the pump-action shotguns featured in the gallery above, please visit the following sites.

This article was originally published in ‘Guns & Weapons for Law Enforcement’ December/January 2017. For information on how to subscribe, please email [email protected]outdoorgroupmags.com or call 1-800-284-5668. 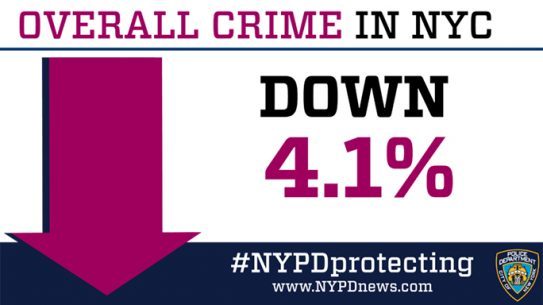 The NYPD has officially released its numbers, and according to the data, the New...