Generally speaking, I test somewhere between a dozen and two-dozen new rifles a year, and of that number there are usually a couple that I anticipate with special interest. For some time, the rifle I have anticipated the most has been the Barrett 98 Bravo. The overall quality and accuracy of Barrett rifles is well known, and I have friends in numerous special operations or counter-terror units who consider their Barrett “50s” among their most effective tools. I agree entirely, having fired Barrett .50 BMG rifles and been very impressed. However, my favorite long-range round is the .338 Lapua, which offers an operator the ability to range out to at least 1,200 to 1,500 yards in the antipersonnel role and still be effective in the anti-materiel role against many hard targets.

The Barrett 98 actually started its life as a semi-auto back in 1998, but never went into full production. Ronnie Barrett’s son Chris revived the 98 project as a bolt gun. Steve Woods Photo

Very important for operators who may be inserted into their AO (Area of Operations) then have to climb or walk to their shooting position, .338 Lapua rifles are generally more portable. They are still not as light as a typical M4, though I have seen M4s with so much gear added that they might be approaching the weight of some .338 Lapua rifles. But a .338 Lapua rifle may be easily humped into action—in fact, some special ops units have made the .338 their default sniping round instead of the .308 or .300 Win Mag. 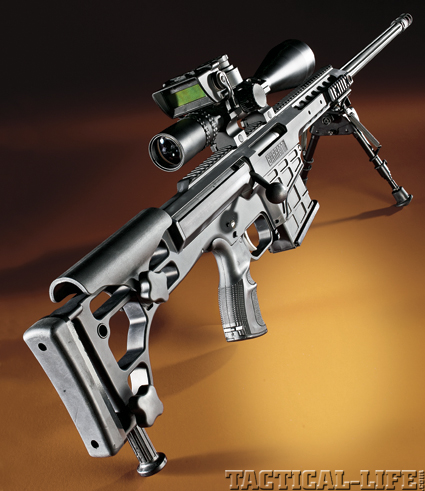 This view from behind the 98 Bravo illustrates how easy it is to see the screen of the BORS while maintaining a shooting position. For maximum comfort and speed, the ergonomic grip pairs well with the hefty bolt knob.

Mountain Missions
Barrett’s 98 Bravo is an excellent platform for the .338 Lapua round. Unlike many other .338 Lapua rifles that are based on sporting rifles, the 98 Bravo was designed from the beginning as a tactical rifle. As a side note, this is the case with the .338 Lapua cartridge as well, which was purpose-designed as a long-range man-killer. Development began on the 98 Bravo over a decade ago, but it wasn’t until recently that the rifle was considered fully ready for deployment with military and law enforcement tactical units. Speaking of law enforcement units, there are some—especially units such as the FBI HRT or state police tactical units—that may be deployed in areas where very long shots might be required. Because of the words “Machine Gun” in the designation, a .50 BMG (Browning Machine Gun) rifle might be harder to sell to administrators than would a .338 Lapua.

A sniper team can do some anti-materiel damage with the .338 LM. The spotter can quickly call the shots for the sniper, allowing him to adjust for a follow-up shot.