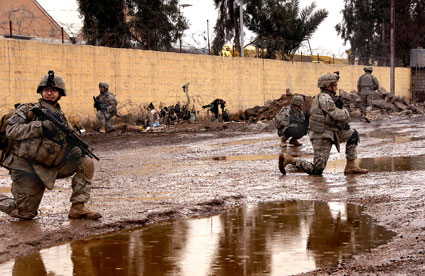 TW NOTE: For every soldier, Marine or airman who participates in the heat of battle, there are multitudes of support personnel who perform the 24/7 tasks that keep the military machine running. There are meals to be prepared; supplies to be sorted and distributed; vehicles to be maintained; administrative reports and procedures; medical facilities to be staffed and supported; and quarters to be established and maintained—to name a few basic operations.

The soldiers performing these duties in Iraq and Afghanistan may never fire a weapon at the enemy. But, like the combat troops they support, they have gone into Harm’s Way, for in the battle zones of today there are no fortresses or encampments where enemy strikes are totally impossible. Regardless of their duties and station, all troops must be trained, armed, and ready to fight.

Mile upon mile of seriously sharp, cutting-edged wire surround our bases and have given rise to the popular expression, “Outside the Wire.” Three simple words, but saying, in one breath, “Danger Ahead! Expect a Fight!” Meanwhile, “Inside the Wire,” the work goes on—unglorious, sweaty, hard-knuckled, back-aching work.

A friend of TW, a Specialist we’ll call “Tony,” is probably typical of the thousands of soldiers today whose main duties take place “Inside the Wire.” When he was last on leave, before shipping out to Iraq, we asked him to keep a journal, to tell us about how he felt about joining the Army, his early experiences, and to stay in touch. We present the following as a tribute to all the men and women serving “Inside The Wire” who may never be known as “heroes,” but still are heroic indeed. —TW 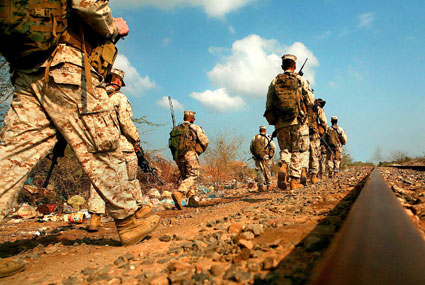 In early 2003, I had no intentions of joining the Army. I was finishing my degree in criminal justice. One day, a classmate walked in wearing her Army uniform. She had just gotten home from Afghanistan. I was really struck hard by her appearance. I bombarded her with questions, and remote thoughts about the Army came stirring back. Serious thoughts of joining never rose because I thought I would upset a lot of people, especially my mom.

Growing up, I watched my mother struggle to raise me and my brother, at times working two jobs. All I ever wanted to do was to make her happy and impress her. Anyway, as time went on I kept talking to my classmate, and the war in Iraq was kicking off. I couldn’t get it out of my head so much so that I found myself at the recruiter, signing up for an eight-year enlistment. In a flash, I was at Fort Hamilton, Brooklyn, then on to Fort Benning GA, for nine weeks of basic training. Then came AIT (Advanced Individual Training) at Fort Jackson, SC, for training in my Military Occupational Skill, which I chose to be 63B, mechanic. It all happened so fast.

Finishing basic training and AIT gave me a feeling of accomplishment. There were plenty of fall outs. I met a ton of people, from all over. I now have skills like rappelling walls and other challenges I’d never have thought of if it weren’t for the military. I never thought in my life that I’d be on a 10-mile march with a 70-pound pack on my back. I learned so much and experiences I’ll never forget the the rest of my life.

Wisconsin Boonies: Fast-forward to 2006. I’ve been on a week’s leave from Fort McCoy, WI and on my way back to reality, wiping tears off my face, leaving behind my family and my gorgeous girlfriend. I don’t know if these were my last good-byes, but that’s the life I live. As soon as I go back  to Fort McCoy, I will start packing and countdown the days for me to jump on a plane and start my tour in Iraq with my new unit, the 680th Engineer Company.

I’ve been training with the 479th Company out of Watertown, NY. These guys are cool, definitely hard-working. Most are just like me—just coming home safe and moving on. Some of the Sergeants are now my buddies. Others are power-hungry and some are plain assholes because of rank. I’m in the middle of nowhere USA-not the Big Apple where I’m from. It’s not even like Fort Dix, NJ. We work 24/7, have PT every morning, no cell phones, anywhere. I guess the “new rules” are getting us ready for Iraq. We’ll be in the middle of nowhere there too (add heat and sand). Right now I’m only good for one thing: Serving my country and maybe even losing my life for it.

Kuwait Stopover: There’s a line of soliders waiting to use this computer, so I’ll be brief. I just finished my training at Camp Buehring, Kuwait, and will go north to Iraq with my unit. The training has been grueling. I’m happy it’s over. A Brent Michaels concert was a fitting reward for the work we’ve been doing, it really boosted my morale. It’s time to move on with my tour; Destination Iraq!

The Wire: Here I am, in Iraq. All I seem to read about are those crazy hooah units that do wild things. I definitely give them the credit they deserve. But I’ve realized, I’ve not ever read or seen any material talking about the backbone of Army maintenance. All these units like mine, the platoons that consist of all the mechanics, clerks and motor pool sergeants—work 24/7 trying to maintain the gear and vehicles. Our job is to keep our guys from breaking down on missions. The maintenance platoon doesn’t go outside the wire as much as other units, but we still have an important and difficult job. Outside of Camp Anaconda, there’s another world. Like the full-bore combat units, we climb into our Kevlar, load our weapons, and go on missions outside the wire. It’s exciting to see the land and people.  We never forget that terrorists could have us in their sights anytime. Some missions involve road clearance. The last two times out we repaired a four lane road that was destroyed by a bomb. Next, we were with a unit that blew up an I.E.D. We also go on humanitarian missions, giving kids toys and soccer balls.

I have learned that freedom is definitely not free! Soldiers experience so much, see so much, and have so much to say that at times people don’t understand where they’re coming from.  To get in their head, imagine being far away from home, not knowing for sure if you’ll ever see your loved ones again, just having memories and a couple of photos in a Third World country. You don’t know much about where you are, you don’t know anyone—except your unit who become your best friends and your family. Communicating by email and an infrequent call is tough.

I give the military a ton of credit. They try to make us feel at home in the camps (I guess Afghanistan too). Still, I feel like I’m living an illusion—sleeping in areas with cement walls protecting us from harm right outside. Our semi-safe area  (home) can get mortared anytime. There are people willing to die, just to harm us, right outside the front gates.
Some nights, I wake up from the sound or shake of choppers and planes.  I wonder if it’s a medvac, and if the wounded they’re after or bringing in will make it.

Everything that’s happening to me out here is all part of the life of a soldier. It’s the life I chose. I wouldn’t change that for anything. I’m proud to be a soldier. And there are many, many others out here who agree with me.

(To be continued, with future dispatches from Specialist “Tony”.) 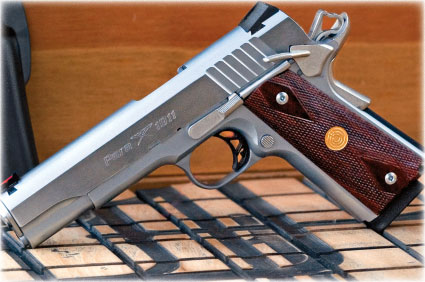 TW NOTE: For every soldier, Marine or airman who participates in the heat of…