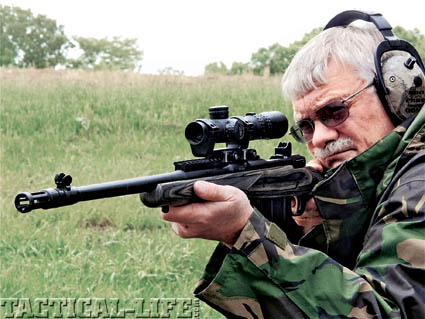 I liked the concept of the scout rifle from the first Col. Jeff Cooper article I read presenting the rationale. The idea of a light, handy rifle usable for hunting or, in some cases, self-defense made sense. It seemed to represent a perfect vehicle rifle. As a result, I’ve tried various scout designs. Some I found too expensive for the average shooter and others didn’t completely satisfy me.

A while back, however, I decided to test Ruger’s Gunsite Scout Rifle. About the same time, two of my friends in law enforcement mentioned that their agencies were considering allowing officers to purchase rifles for carry in their patrol cars. One is the chief of a relatively small department that patrols a suburban, semi-rural area, while the other is with a large metropolitan department. Both were considering AR-15 rifles but were not completely con­­­­­­vinced that was what they needed. As it happened, too, I had the Ruger Scout in my truck and brought it in to show them. I also explained that I had been carrying the Scout in my truck for a couple of months instead of an AR-15-type rifle. 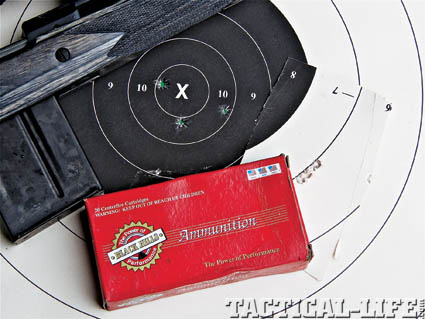 The larger group was fired prone at 100 yards and the smaller group from a rest at 100 yards using the Ruger Gunsite Scout and Black Hills 168-grain Match ammo.

.308 Winner
First, let me say that for many law enforcement duties I think an AR-15 or AR-10-type rifle performs its function well. For tactical units or other units that perform entries or serve high-risk warrants, the AR offers penetration—or not—depending on ammo choice for use against criminals who might wear vests or might be barricaded; it offers substantial magazine capacity and handiness in M4 configuration. Good optical sights, such as the EOTech, Aimpoint or ACOG, are available to allow fast acquisition and engagement of targets. For armed and barricaded suspects, the AR has an intimidation aspect as well, indicating that those so armed are serious about taking them down. Another plus is that a lot of those entering law enforcement today are military veterans and, hence, familiar with the basic weapon system. 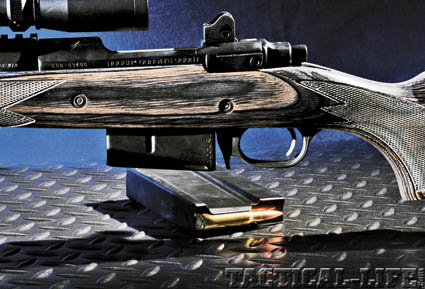 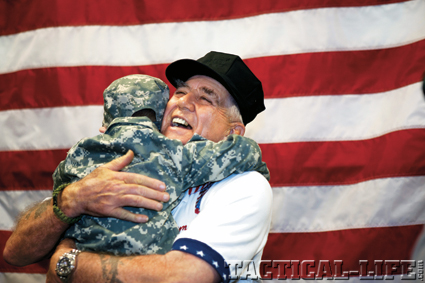 I liked the concept of the scout rifle from the first Col. Jeff Cooper…