by Jason Wong
in Guns, Rifles
0

0
SHARES
16
VIEWS
Share on FacebookShare on Twitter
The Adcor B.E.A.R. represents new innovations and upgrades to the popular and battlefield-proven M4/AR-15 rifle system.

By the time a particular weapons family has become the longest-serving standard rifle design in U.S. military history, and has been involved in combat both minor and major almost continuously during that record tenure, all its eccentricities and weak points have become known. The evolutionary process of the AR platform, from the M16 to myriad variants and upgrades fielded today, has largely been a process of making fixes one at a time, based on combat experience. As a result of this process, the AR has developed into a mature, useful military arm. It has passed the historical Mauser 98 action as being made by more manufacturers worldwide, in more variations, than any rifle in history, including the legendary and repeatedly cloned Kalashnikov. 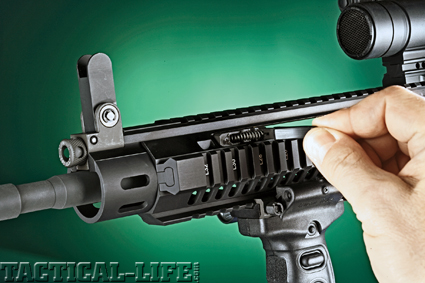 The forward charging handle is non-reciprocating and retracts when not in use. It proved to be very effective during testing.

Some of these variants comprise worthy upgrades—some may not. Except for stock variations, most attention has been to the upper receiver, usually addressing points relating to with the original direct impingement gas system. Again, some of these changes and adaptations are worthy upgrades, and some are not. One that is: the design being made by Adcor Defense. The Adcor upgrade, among other advantages, is available as a retrofit to existing weapons—and it does as advertised. 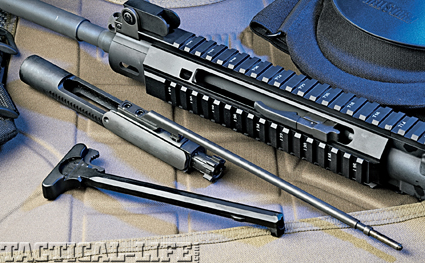 “I wanted to deliver a retrofit with features never before seen on a weapon,” Michael Brown, chief engineer for Adcor Defense, said. And that is exactly what Brown and his team did with the development of a four-piece retrofit for any AR-15/M16 system, with a short-stroke, piston-driven AR-15/M4 upper receiver. The retrofit’s features include a highly accurate free-floating barrel, ambidextrous forward-placed charging handle/forward assist, an ejection port door that closes after each round is fired and a fully integrated rail system. All of the new components are removable for maintenance without the use of any tools.