0
SHARES
66
VIEWS
Share on FacebookShare on Twitter
Paired with a Leupold HAMR topped off with a DeltaPoint reflex sight, the AdeQ Paladin is a standout performer that is ready for duty—whether a threat is up close or far away.

When I was asked to take a look at a new company in the tactical rifle market, primarily the AR-15, I thought, “Oh man, not another one.” But I said, “Sure.” After contacting AdeQ Firearms, I was told that a Paladin Patrol Rifle would be headed my way.

Later, a box arrived, and inside was a short, light AR-15 in the “civilian M4” configuration. The second I examined the carbine, it struck me that it had everything it needed and nothing it didn’t. In fact, it seemed an ideal little tactical patrol carbine for an LE officer. As most readers know, the AR platform can be “Barbie for men” with all of the accessories available for it, but this slick little gun came with the accessories that would be perfect for LE patrol duty. Things were certainly looking up, and I was now looking forward to heading to the range with the AdeQ Paladin Patrol Rifle.

The folks at AdeQ have obviously taken note of the popularity of Magpul accessories—they make liberal use of them. This is fine with me because Magpul makes great stuff. The company’s gear is ergonomic, efficient and truly enhances the performance capability of any AR platform. Magpul accessories are also reasonably priced, so a manufacturer can equip its guns with their useful kits and help the operator save money. The first thing I noticed were the two Magpul PMAGs included in the box. I have become so impressed with these magazines that I use nothing else. I then noted the MOE grip that adds material to the area where the web of the hand meets the gun for better trigger finger placement. Next was the MOE collapsible stock that not only is lightweight and streamlined, but it offers a decent cheekweld surface to get on the sights quickly with consistency. The rubber buttplate also helps hold the stock in place during rapid fire for faster follow-up shots. 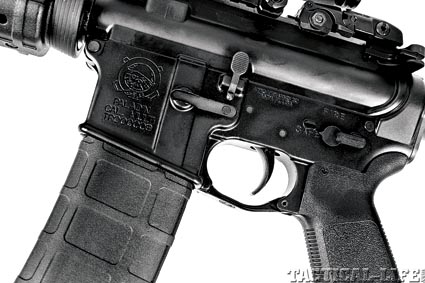 The upper and lower receivers on the Paladin fit snugly. AdeQ also equips the rifle with a Magpul rear sight and 30-round PMAG.

Another nice addition was the Magpul handguard, part of the company’s MOE (Magpul Original Equipment) series, which combines the light weight of a standard plastic handguard with the capability of adding a rail interface system only where you need it. I must admit that many of the rail systems today offer enough rail surface to open a railroad, and since all I place on my gun is a weapon light, most of the rail goes unused and offers a sharp edge—even when rail “ladders” are in place. Rail guards also make the forend too wide for my hands. But this isn’t the case with the Magpul MOE version; it stays trim and easy to use even with small hands. The last piece of Magpul kit added to the Paladin was one of their polymer flip-up rear sights that can be released from either the top or side of the unit. While the current training trend is to keep the irons up even when using a reflex sight, I just can’t do it. Maybe I could when I had 20-year-old eyes, but these days it can make the sight picture too “busy” for me, so I keep the rear down and deploy it when needed. It’s slower, but it works, and being able to hit a button and have the sight pop up is worth noting.

After pulling the gun from the box and checking to see that it was clear, I tried the trigger via a bit of dry fire. This is one of the best factory triggers that I have felt straight from the box. I have become a fan of the drop-in trigger modules from companies like Wilson Combat and Chip McCormick due to their superior feel, quality and ease of installation, and while the AdeQ trigger was not as nice as one of these, it was darn close! The slack was minimal, as was the creep, and the reset was quite snappy. I knew before I headed to the range that this gun was going to be a pleasure to shoot. The straight-profile 1-in-7-inch-twist barrel gave the gun attractive lines and you don’t need an indented barrel unless you plan on mounting a grenade launcher. The flash suppressor is standard mil-spec and while it does not help reduce recoil, this setup should be fine for LEOs out there. I’m not much for hanging extra gadgets on my gun, but there are a few add-ons that work for me. The great thing is that AdeQ already put most of them on for me. So with the exception of an optic and weapon light, I was good to go.

I have used various Leupold optics for over 25 years and I have yet to suffer a problem with one of their scopes. Leupold recently introduced a new fixed-power magnified combat optic called the Mark 4 HAMR (High Accuracy Multi-Range), which can come with their excellent DeltaPoint compact red dot for CQB applications. The HAMR is perfect for use on any AR-15. Every aspect of the riflescope was designed for speed, precision and simplicity—key components for any combat sight system. The Xtended Twilight Lens System optimizes the transmission of low-light wavelengths so the shooter sees the details of low-light scenes in clearer detail than with other riflescopes. The DiamondCoat 2 coatings on the exterior lens surfaces provide the highest level of scratch resistance available.
The HAMR comes with a ballistically matched illuminated CM-R2 reticle that is ideal for 3-Gun competition or combat situations. The reticle pattern provides traditional, precise distance marksmanship with close-in aiming speed, is visible with or without illumination, and can be adjusted for brightness. Add the optional Leupold 3.5- or 7.5-MOA DeltaPoint red dot sight for fast target acquisition regardless of engagement distance. The Leupold HAMR is built for battle and it will work in either the military or law enforcement environment. 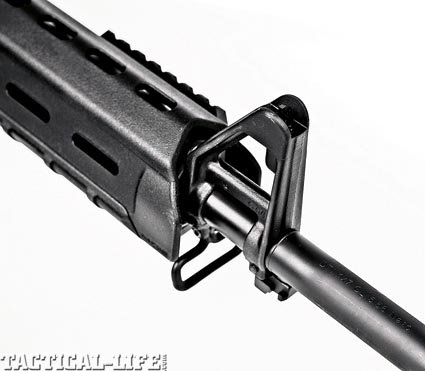 A shooter (and the rifle they carry!) is only as good as the threat they can see, so having some type of white light attached to a rifle is essential. The new WL1-AA series of lights and lasers from Insight Technology are a good choice for rifles or pistols. The new Quick Release Rail-Grabber mount provides fast and solid attachment while keeping a low profile on the gun. Special Forces operators asked Insight for a high-output light using commonly available and relatively inexpensive AA batteries and this was their answer. The WL1-AA produces 150+ lumens for up to 90 minutes from an incredibly durable LED bulb. In the past, shooters using their lights on multiple weapon systems noticed that inconsistencies in rail size caused fit problems. The Quick Release Rail-Grabber mount on the WL1-AA allows for a rock solid fit on rails that meet Mil-Std-1913, and on most that don’t. A four-position adjustment crossbar provides precision adjustment of the light fore and aft on the rail. My test unit also came with a laser sight.

I was quite enthused about heading to the range with the AdeQ Paladin, so I collected a wide variety of carry loads and headed to the gun club. I tested accuracy at 100 yards from a rest consisting of Giles Bags from The Wilderness.
Once I got it the Paladin on the page and zeroed, I loaded Remington’s 69-grain match load and found the gun was now really starting to perform (despite some initial trouble getting it to group while zeroing). The 1-in-7-inch twist rate barrel is meant to fire heavy loads and that is what it seemed to prefer. The groups stayed around 1.5 inches (2 to 2.5 inches is considered the norm for a 16-inch carbine) and shot to the same point of aim. I then broke out my two favorite 5.56/.223 loads, the Hornady 75-grain TAP and the famed Black Hills 77-grain “Special Operations” load. Both of these rounds have proven to be exceptionally accurate, and I was keenly interested in what they would do here. 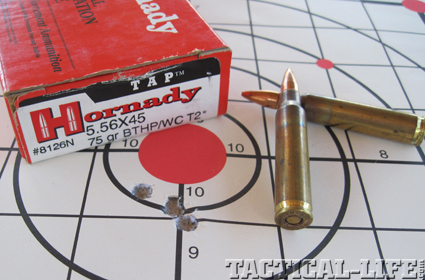 The 75-grain TAP shot a 0.75-inch group. At first, I thought it was a fluke. I shot two more groups, each measuring 1 and 0.75 inches, so I realized this rifle was exceptional! I do not consider myself to be a gifted shooter, so I was very happy with this gun. I then broke out the 77-grain Black Hills and shot a four-round group. I looked through my spotting scope and saw what I thought was one hole. I wondered where the other three rounds hit. When I walked downrange, I discovered a ragged one-hole group that was half an inch wide. I finished my test by shooting various CQB-related drills just to see if I had any problems with the Paladin, and I did not.

In the end, I was most impressed with both the feel and performance of the Paladin. It had everything I need in a combat carbine and nothing I don’t. The fact it is exceptionally accurate it just icing on the cake—and the reason it sets itself apart from the legions of AR rifles out there. Needless to say, this is an affordably priced performer that should easily fill the role of an LE patrol carbine.