The story has repeated itself too many times to count. A car speeds toward a group of people. Maybe it’s a checkpoint or a group of people waiting in line to vote. In less time than it takes to write this paragraph, the car explodes, killing scores and wounding hundreds. So far, the scene is stereotypical for Iraq and Afghanistan. If there’s a law enforcement officer standing between innocent lives and a hell-bent terrorist, I hope he has more firepower in his hands than a sidearm or possibly a standard AR-15. 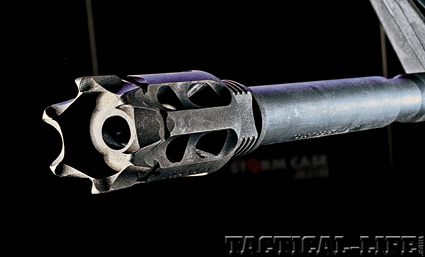 A GoGun Talon muzzle brake tames recoil and reduces muzzle rise to keep you on target for fast and easy follow-up shots.

Don’t get me wrong, the 5.56mm NATO is a battle-proven cartridge, and the AR platform has more than five decades of service to recommend it. But this combination has limited usefulness in stopping a car or truck. In a realistic sense, the only actual man-portable anti-materiel weapons fire are .50 BMG rounds, but that’s a bit much to expect a patrol officer to carry in the trunk of his cruiser. What makes better sense is an AR-10-platform rifle with a 20-round magazine to provide enough penetration to stop a vehicle, smash through a windshield or defeat a barricaded threat. When the 5.56mm cartridge isn’t enough, LE officers might want to have AdeQ Firearms’ new .308 Venator Battle Rifle in their hands. 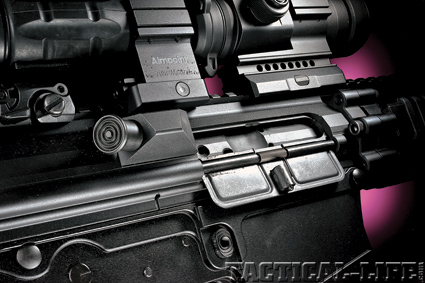 The upper receiver is an extrusion made from 7129-T5 aluminum that is anodized and Teflon-coated for a long, productive life.

Some tactical weapon manufacturers stick with familiar sounding names for their various guns. Many sound like nomenclature from a military instruction manual, while others get creative when naming weapons. “Venator” is a Roman military term meaning “hunter” or “skirmisher,” which applies to this firearm. “We were driving to our first show in June in Altanta and Alex pulled out a Roman military dictionary and went through several,” AdeQ Chief Operating Officer Chris Krier said, “and Venator stuck.” 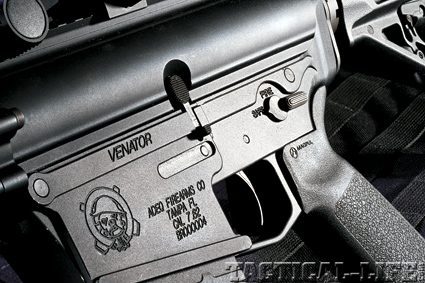 The Venator’s lower receiver is milled from a solid 6061-T6 alloy billet and has a Teflon-coated black. Note the easy-to-hold Magpul MOE grip.

While we’re on the subject of names, the company itself takes is the nom de plume for its owner and CEO, Alex de Quesada. He has more than 30 years of experience with a multitude of rare historical weapons. In addition to familiarity with current weapons as an armorer, he is a collector, museum curator, and was a frequent consultant and provider of weapons for the film industry. “We have weapons that range from the earliest to the most modern,” de Quesada said. “Building guns when I was younger helped foster my mechanical view of things.”

When asked why he entered the gun business, “It’s been around me all my life,” de Quesada said. “I grew up with guns. We started customizing weapons for the Hillsboro County Sheriff’s Department in Florida. It started with the idea of putting these together from the basic components to customize their weapons builds. We also provide a service in catering to law enforcement. We want to give something back to these guys. We offer our clients the choice of building the weapon from the ground up. We have the flexibility of using the best parts in our builds.”

Magpul’s MOE rear flip-up sight matches well with the rifles’ A2 front sight, and is a good choice as backup to a mounted optic.

And AdeQ Firearms’ location in Tampa, Florida, could not be more helpful for law enforcement. Several agencies help keep the streets safe throughout the bay area, comprised of Tampa, St. Petersburg and Clearwater, and officers from these neighboring municipalities can come into their shop and order their patrol rifles in person. Many of AdeQ’s armorers also work as reserve sheriff’s deputies, and this experience comes in handy when they help fellow officers select components for personalized builds.

Several Tampa Bay-area agencies have allowed their officers to purchase their own rifles and train with them. In 2004, the St. Petersburg Police Department finally let street officers use their own rifles. Starting on October 6, 2011, after three St. Petersburg officers were killed while on duty, Police Chief Chuck Harmon agreed to give officers interest-free loans to help them pay for patrol rifles. Many officers have already made the decision to go with AdeQ for parts and customization work, and now the company has developed its Venator Battle Rifle in .308 to fill a power gap between 5.56mm and .50 BMG in case Tampa officers need to defeat body armor, as two heavily armed bank robbers proved in 1997 in Los Angeles against officers only armed with handguns and shotguns.

In my rush to get some information about the Venator to Guns & Weapons for Law Enforcement readers, I asked the folks at AdeQ to send me one of their pre-production guns for testing. This one was only the second Venator to come out of their production shop. Cosmetically, there was some evidence that this rifle served as a prototype for the final production run. 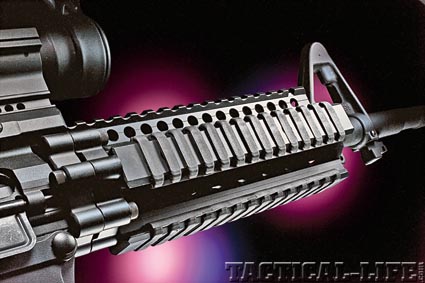 The Venator’s Daniel Defense rail system was also selected by SOCOM for the SOPMod II program.

Gun Details
The Venator built in AdeQ’s Tampa shop starts off with a forged flat-top upper and billet lower receiver. Built in the style of the DPMS LR-308, the Venator sports an M4 profile carbine-length barrel and direct gas impingement system.
Starting at one end and working toward the other, the buttstock is an adjustable six-position Magpul MOE buttstock. The carbine-length buffer spring tube is mounted with a standard castle nut. The carbine spring and carbine-length 3.8-ounce carbine buffer provide reliable return to battery. The lower receiver is milled from a solid billet of 6061-T6 aluminum, hardcoat anodized per mil-spec and Teflon-coated black. An integral triggerguard surrounds the standard AR-10 trigger group. A standard AR-15 magazine release button and bolt release complete the lower receiver, along with a comfortable Magpul MOE grip.

The upper receiver is an extrusion made from 7129-T5 aluminum that is anodized and finished to match the lower receiver. The Venator’s shell deflector and forward assist are machined as one unit. A dust cover protects the bolt carrier that is milled from 8620 steel, which is heat-treated and plated per mil-spec. The bolt is phosphated and heat-treated per mil-spec as well.

The Venator’s 416 stainless M4-contour barrel measures 16 inches. The barrel is button-rifled with six grooves and a right-hand 1-in-10-inch twist. The rifle is chambered for the 7.62x51mm NATO cartridge, and the barrel has a Teflon black coating to cut any shine. You’ll find a standard A2 front sight gas block placed in the carbine position that works in tandem with a Magpul MBUS flip-up rear sight. The handguard is a Daniel Defense 9-inch 7.62 Lite Rail, featuring components selected by SOCOM for the SOPMOD II program. This handguard offers Mil-Std-1913 rails on the top, bottom and sides that are “T”-marked to aid in replacing accessories. The muzzle is threaded 5/8-24 threads per inch so you can add many barrel attachments. AdeQ also equips the Venator with a
GoGun Talon muzzle brake to reduce recoil.

“We tame this beast with the use of a GoGun Talon muzzle break,” Krier said. “This gives the Venator greatly reduced recoil and muzzle rise that can be typical firing the .308 cartridge.” During development of the Venator, Krier found a potential improvement to the Talon muzzle brake that will be implemented on future production. “I was testing the rifle in our facility and didn’t install a spacer between the brake and the muzzle,” he said. “One of the twin side ports was pointing up, and when I fired it, the recoil was even less. We went back to the owner of GoGun and suggested that they add a second port on the top of the brake. They made the change, and we will add these improved brakes to the Venator.” Overall, this rifle is solidly built and should stand up to rigorous use.

Range Time
The testing regimen included five-shot 100-yard groups from a steady bench. To wring out the best accuracy results, I also equipped the Venator with a Bushnell HDMR Elite Tactical 3.5-21X scope with the new Horus H59 reticle. I fired a minimum of three groups with one handload and three quality, target-grade factory loads. After bench testing for accuracy, a mixture of 100 rounds of factory loads and handloads were fired at reactive steel targets to test the rifle’s function and have a little fun. The Venator consumed a wide range of loads
without a hitch. 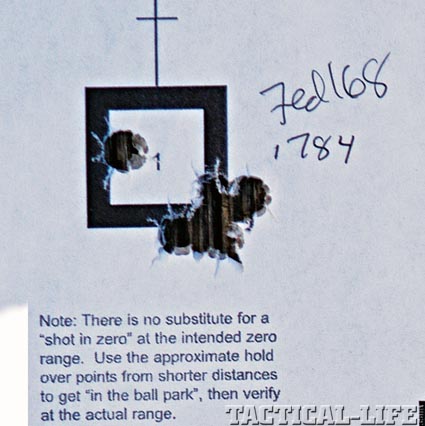 The Venator’s magazine well is sized to accept Magpul’s excellent 20-round 7.62x51mm magazines.

The first factory load was Federal’s 168-grain Gold Medal Match, which uses Sierra MatchKing bullets. Surprisingly, the lightweight M4-contour barrel responded well. The first group from a cold barrel measured 1.03 inches. The next group shrunk to 0.78 inches, and the third group measured only 1.28 inches. This is impressive performance out 100 yards.

Next up, Hornady’s 168-grain A-MAX Superformance loads produced groups measuring 0.88, 0.90 and 1.02 inches, which averages out to 0.93 inches. Interestingly, the center of the Hornady groups only printed 0.75 inches higher than the Federal 168-grain groups.

The third factory load was Winchester’s 168-grain Match. This load printed at the same point of impact as the Federal 168-grain loads. Averaging 1.3 inches, the Winchester load produced 1.69-, 1.42-, and 0.79-inch groups, with the tightest group only .002 inches larger than the smallest Federal group.

Finally, I fired handloads with Nosler 165-grain Ballistic Tip bullets. These were loaded with 43 grains of W748 and ignited with Federal Large Rifle Match primers. The average for this load measured 0.99 inches, with the smallest being 0.70 inches.

Final Thoughts
The AdeQ Venator is a shooter. I was pleased to see this rifle averaging just over MOA, and frequently producing groups that hovered around 0.75-MOA. Regardless of whether the intended purpose for the AdeQ Venator Battle Rifle is for law enforcement use, self defense, or hunting, it has the knockdown power to serve its intended purpose. Tampa Bay-area police officers are well-served if they choose to arm themselves and patrol with these powerful, accurate .308-caliber soldiers.