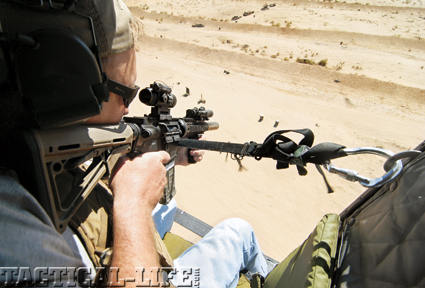 Locked on target! With a suppressed Noveske M4 Carbine, the operator engages a ground target from inside the Dillon Aero OH58A Kiowa helicopter.

This changed after 9/11, when designated aircrews from U.S. Customs & Border Protection’s Office of Air & Marine began utilizing air crew rifle operators. They were the only personnel specially trained and authorized to deploy an air crew rifle from inside a CBP-OAM aircraft. Outside of joining the armed forces or the above CBP units, the best place to learn how to safely and effectively operate a belt-fed machine gun or a tactical rifle from a moving helicopter is at the specialized training schools that are run by Dillon Aero in Arizona. 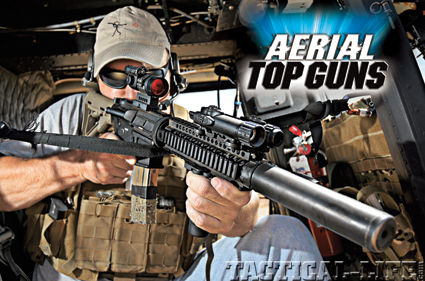 A member of the U.S. Armed Forces prepares to take off to engage mock threats from inside a Dillon Aero helicopter while attending the CD/JD Aerial Rifle course.

Higher-Ground Ops
If you have a take-the-fight-to-the-enemy mindset, then you know it may be necessary to dominate a battlefield or engagement area from above. Snipers have traditionally assumed firing positions on the highest ground available. This provides an over-watch position that enables a sniper or designated marksman to engage targets that may not be visible from lower ground. When you take that same sniper or designated marksman and give them a helicopter as a shooting platform, you dramatically increase their potential effectiveness. In other words, if assuming a position on a rooftop provides a sniper or a designated marksman with a commanding view of a limited area of operation, having them establish a shooting platform inside a helicopter provides a commanding 360-degree view of the area of operation. A helicopter can hover or maneuver between buildings, over buildings, in between mountain ranges and all around an AO, while also being able to address distant targets. 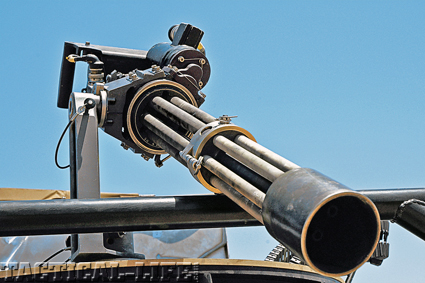 The M134D-H Hybrid Gatling Gun is the latest gatling design from Dillon Aero. On land, the M134D is currently deployed worldwide for convoy escort, border patrol, and VIP protection. 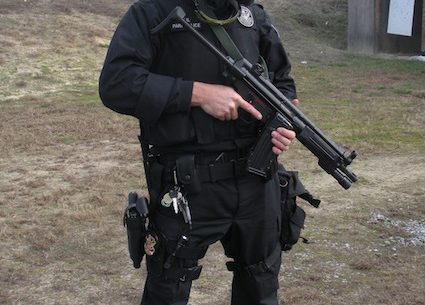 Locked on target! With a suppressed Noveske M4 Carbine, the operator engages a ground…