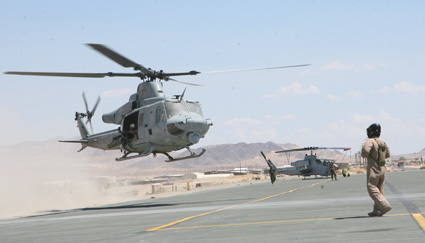 Scarface will be the first squadron to utilize the Yankee while conducting combat operations in support of the ground combat element and other coalition forces in Operation Enduring Freedom-Afghanistan.

HMLA-367 is training as a squadron at EMV, a combined training exercise that incorporates the close air support and ground combat element as they simultaneously prepare for deployment. Scarface aims to be expeditionary, improve their field maintenance capabilities and be able to operate in conditions and scenarios much like those they may face in Afghanistan.

“Twentynine Palms mirrors the terrain where we are going to fight, which is great,” said Lt. Col. Michael J. Borgschulte, commanding officer, HMLA-367. “EMV has been the best training opportunity we’ve had to date. It has allowed us to train with the combat element we are going to conduct operations with in Afghanistan,” he said.

This is important because the training will allow them to develop essential personal relationships and improve their chances for success during their deployment, said Borgschulte, a Springfield, MO native.

“I am extremely confident in my Marines. Our squadron has a lot of combat experience,” said Borgschulte. “This squadron’s combat readiness is higher than any squadron I have been in.”

With this elevated combat readiness and the combined assault of the new Yankee and the AH-1W Cobra, Scarface is ready to be unleashed in Afghanistan.

The UH-1 Yankee is the most significant upgrade made to the older, battle-proven UH-1N “Huey.” The Yankee is equipped with a modified four-blade, all-composite rotor and has upgraded engines and transmissions to give it increased payload and performance capabilities.

“The guns on it are actually the same, but we can carry a lot more ammunition, stay there longer, shoot more and then provide other roles,” said Cpl. Michael J. Eklund, a UH-1 crew chief with HMLA-367.  The UH-1N was capable of providing close air support and little else while the Yankee brings close air support, small team insertion and extraction, casualty evacuation, and much more to the fight.

‘The increased payload is going to be the biggest advantage of the Yankee over the older Huey, said Capt. Curtis W. Rose, a UH-1Y and UH-1N pilot with HMLA-367.”

The increase in speed is another advantage Rose was pleased with.

“We are no longer the weak sister to the Cobra; we can keep up,” said Rose, from Fredericksburg, Va. “We can sometimes fly faster than they can.”

The Yankee crew is also happy with the increased visibility and situational awareness the aircraft provides.

“Unlike our other helicopters the Yankee doesn’t have blind spots,” said Eklund, 26, from Pleasanton, Calif. “My weapon can shoot anywhere from off the nose to behind us.”

The system will allow the pilots to view and mark targets with infrared sightings further out and aid in instant target recognition by pilots and crew chiefs.

The Yankee’s increased ability and resources coupled with the firepower of the AH-1W, prepares the leathernecks of Scarface to deploy to Afghanistan this fall with unprecedented combat effectiveness.

“The enemy needs to realize that not only are we going to be able to accomplish missions like we always have, but we are going to keep doing it for much longer and bring a much harder fight to them,” said Eklund. “We are going to be a lot quicker, faster and be carrying a lot more ammo to do it.”