WASHINGTON, Sept. 17, 2009 – As the situation in Iraq stabilizes, a variety of factors –- some of long-ago origin — make the mission in Afghanistan a complex endeavor, the U.S. military’s top officer said here yesterday.

“There are lessons that we’ve learned from Iraq; many of them apply in Afghanistan, many of them don’t,” Navy Adm. Mike Mullen, chairman of the Joint Chiefs of Staff, told members of the American Enterprise Institute at the think tank’s kickoff of its new Center for Defense Studies.

The situation in Iraq is much better today, Mullen said.

“We’re on a good path” in Iraq, Mullen said, noting that the Iraqi government and its security forces “are in the lead.” Mullen said he was particularly pleased by how Iraqi Prime Minister Nouri al-Maliki and his country’s soldiers and police responded during a recent spate of insurgent bombings.

Afghanistan and Iraq, Mullen said, are different nations — both geographically and tribally.

Yet, “there are some great similarities” inherent in the missions in Afghanistan and Iraq, Mullen said, in terms of how to implement a counterinsurgency strategy, in which winning the hearts and minds of the people constitutes the prize.

Mullen recalled the 1979-89 Soviet-Afghan War, when the Soviet Union invaded and brutally occupied Afghanistan for a decade.

“There are differences between us and the Soviets, in terms of our goals when we went in there,” Mullen said. “We’re not an occupying force; we’ve never occupied a country and we won’t do it there.”

Many of the Afghan people are now “on the fence,” Mullen said, meaning they’re undecided whether or not they’ll support the central government of President Hamid Karzai or the Taliban insurgents.

The ability of Afghanistan’s central, provincial and local governments to provide essential services for the country’s people remains an imperative if the Taliban are to be defeated, Mullen said.

The U.S. military and Afghan allies kicked the Taliban out of power during Operation Enduring Freedom in the fall and winter following the Sept. 11, 2001, terrorist attacks on America. The Taliban had allowed al-Qaida terrorists to train in Afghanistan and plot attacks.

Fast-forward to March 20, 2003, when the launch of Operation Iraqi Freedom toppled Saddam Hussein’s government. After several years of bitter fighting, the 2007 U.S. troop surge — overseen by Army Gen. David H. Petraeus, the U.S. commander in Iraq at the time — defeated insurgent forces lodged in and around Baghdad. Petraeus’ surge campaign has been credited as having helped put Iraq on the path of stability, as its government becomes stronger and Iraqi soldiers and police take up their nation’s security and law enforcement missions.

However, as the U.S. military’s focus was placed on Iraq during the pre-surge years, the mission in Afghanistan took a second seat.

Afghanistan “is a war that has been under-resourced,” Mullen said. The issue, he added, reaches “far beyond” discussions whether or not to increase the U.S. troop presence there.

Afghanistan and its neighbor to the east, Pakistan, constitute “an enormously complex region,” Mullen pointed out. Al-Qaida insurgents chased out of Afghanistan are lodged in remote regions of northwestern Pakistan along its border with Afghanistan. Fugitive al-Qaida chieftain Osama bin Laden is believed to be hiding out in Pakistan.

Today, Army Gen. Stanley A. McChrystal is the top U.S. commander in Afghanistan, with Army Lt. Gen. David M. Rodriguez as his deputy. Petraeus, the architect of the Iraq surge, is the chief of U.S. Central Command, which has responsibility for U.S. operations in Afghanistan, Iraq and other parts of the region. Navy Adm. James G. Stavridis is commander of U.S. European Command and wears a second hat as NATO Supreme Allied Commander Europe. Thousands of NATO troops are deployed in Afghanistan.

The Afghans and Pakistanis, Mullen said, probably are leery of the extent of U.S. commitment to their countries, remembering times in the past when the United States had helped them and then became involved in other endeavors.

Rebuilding Afghan and Pakistani trust of the United States “will only come back over time through, I think, constant engagement and a better understanding,” Mullen said.

The United States, Mullen emphasized, is committed to Afghanistan, as well as Iraq. The 21,000 additional troops sent to Afghanistan earlier this year, he said, are indicative of the depth of that commitment.

And, because of the complexity of the mission in Afghanistan, it is essential to get the strategy right, Mullen said.

“Those are the best leaders I’ve got,” Mullen emphasized, “and we should have that kind of commitment” to Afghanistan.

Mullen also praised the efforts and sacrifices of U.S. servicemembers and their families.

“It’s the best military I’ve ever been associated with,” Mullen said, noting today’s servicemembers are among the most combat-experienced ever. 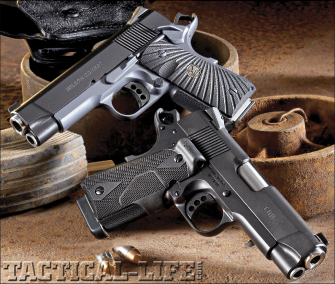 Guns Of The Texas Rangers