by Pat Covert
in Uncategorized
0 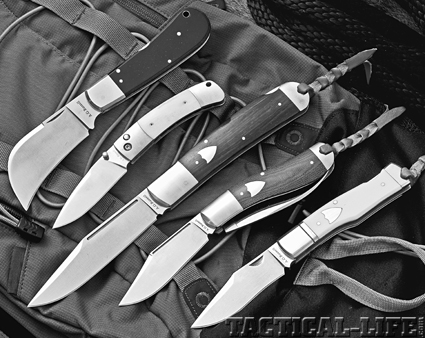 Russell has a penchant for adding his own touches to the knives he designs. Left to right are the Beak Pruner, Titanium Button lock, Folding Hunter, Sowbelly Trapper, and Medium Gunstock Trapper. TERRILL HOFFMAN PHOTO

If you’ve followed A.G. Russell’s mail order catalog or website, you’ll no doubt know that the man has an appreciation for all things traditional when it comes to knives. Not only does Russell hold license to the Morseth knife brand, he carries a nice range of traditional patterns of contemporary manufacture as well as a group of his own iterations of what we’ve come to know simply as “pocketknives.” There is a marked difference, however, between the factory renditions of these knives and those Russell produces. Whereas the factories are inclined to replicate the old patterns faithfully, A.G. likes to add his own design touches. 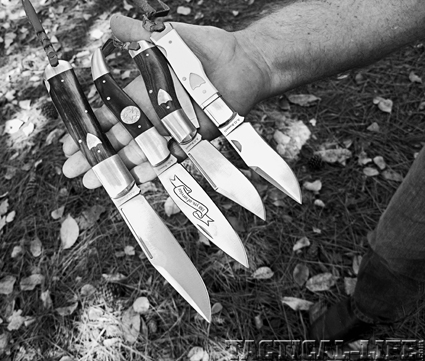 What we have here is a handful of A.G. Russell steel ready to do battle. From left to right are the Folding Hunter, Sub-Hilt Toothpick, Sowbelly Trapper, and Medium Gunstock Lockback.

The market for traditional folders has been increasing at a steady pace over the past 10 years and tends to be divided into two general groups: domestic and offshore manufacture. Some domestic factories’ fare leans toward adequate to so-so quality as a whole, while the offshore offerings (typically made in Taiwan and China) can vary widely from out-and-out junk to surprisingly high quality. We’ll save the philosophic differences over offshore production for another day, but it’s a true fact that some of this country’s top manufacturers are producing all or some of their knives offshore. In a nutshell, offshore companies are capable of producing fine products, but the company that hires them must hold them to stringent standards to get it. All of the A.G. Russell folders featured here were produced in China. 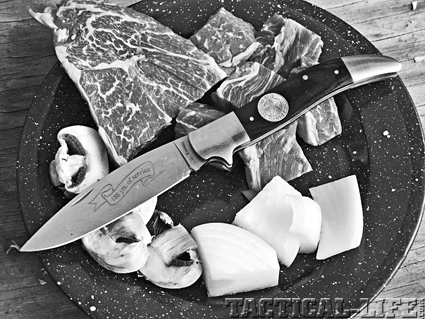 The Toothpick pattern isn’t as popular as it once was but it does make an excellent food prep blade, especially around camp making stew.

I’ve spoken to A.G. Russell on a couple of occasions about his penchant for adding his own design touches to his designs. When you peel back the business side of Russell you’ll find that he has a strong creative side, and it is through the knives he designs that he gets to satiate his appetite. A quick note about the steels in these knives. 8Cr13MoV and 9Cr18Mo are both Chinese stainless steels comparable to AUS-8 and 440C, which most of us are familiar with. Of the two, 9Cr18Mo is slightly higher end. As with all steels, the heat-treatment and prep are critical to their effectiveness.