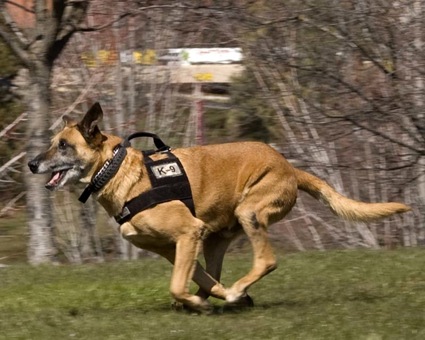 Lucky, a military dog based at Fairchild Air Force Base, may be 10 years old and a two-time cancer survivor, but he’s also young enough to take on a fourth tour of duty overseas.

Lucky and Fall will patrol the grounds at Manas, a relatively safe job compared with Lucky’s previous assignments searching for improvised bombs and weapons caches in Iraq and Afghanistan.

Manas is the main entry point for military operations in Afghanistan. For Fall, this is his third deployment overseas and his second to Kyrgyzstan.

When Lucky returned from Iraq last summer, it was thought his age and health issues would force him into retirement.

“As long as a dog can work and he’s healthy, he can deploy,” said Tech. Sgt. Levi Wilson, one of the K-9 handlers at Fairchild in the 92nd Security Forces Squadron.

“For 10 years old, he is still healthy. He’s young at heart,” Wilson said.

A Belgian Malinois, Lucky is graying around the muzzle and he’s not as large as some of the other dogs in the military working dog section at Fairchild.

Even so, he is trained to remain cool under fire, and has the tenacity to subdue a fleeing suspect on command. Like other dogs in his breed, he adapts well to his surroundings.

Lucky, a military dog based at Fairchild Air Force Base, may be 10 years…