by Mike Boyle
in Guns, Shotguns
0

3
SHARES
12
VIEWS
Share on FacebookShare on Twitter
Aimpro has a special partnership with Mossberg that allows them to customize their tactical shotguns. Adding several performance-enhancing accessories, such as a ventilated steel handguard to help dissipate heat and a fiber-optic front sight, makes the Aimpro Urban Combat M590A1 an ultimate threat management tool.

Despite the increased use of rifles by U.S. law enforcement agencies, shotguns are still widely utilized as secondary weapons. With many agencies, the shotgun is still the only shoulder-fired weapon available to the patrol officer. In the future, the patrol rifle may, in fact, become more popular as the shotgun takes on a more specialized role. Shotguns, however, represent the “here and now” and will be a vital law enforcement tool for the foreseeable future. 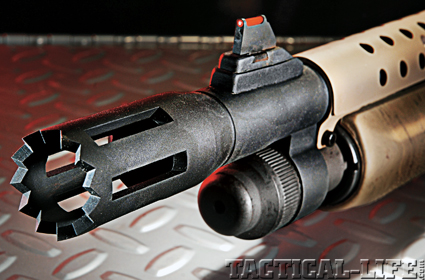 More than just menacing looks, Aimpro adds this special standoff breaching device at the end of the M590A1 barrel.

Regardless of how you feel about the combat shotgun, improvements in this tried and true system have made it better than ever. Contemporary offerings from a number of manufacturers are especially well-designed, reliable and just about cop-proof. Shotgun ammunition developed specifically for law enforcement applications is readily available with performance characteristics far superior to that offered in the past. Accessories such as improved stocks, lights, slings and sights also bring a great deal to the table and help make the shotgun an even better fighting tool. 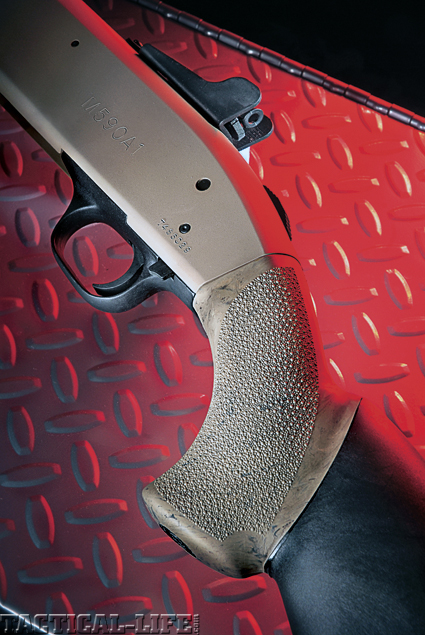 The shotgun’s grip has been enhanced with tactile, stippled rubber for a positive grip and faster, enhanced manipulation in cold or wet circumstances.

Mossberg is widely recognized as a leader in the development of shotguns for law enforcement and military use. The Mossberg 590A1 is utilized by the U.S. Marine Corps and has been in service in both Afghanistan and Iraq. Here in the U.S., this rugged shotgun has been selected by the NYPD and hundreds of other agencies. My personal experience with this shotgun has been overwhelmingly positive. Several years ago, I picked up a quintet of Mossberg 590s for agency use. One example utilized exclusively as a training gun has run up a round count comparable to a high-mileage pistol, yet it shows no signs of giving up the ghost. Like many southpaws, I have also come to favor the ambidextrous tang safety of the Mossberg 500/590 family. 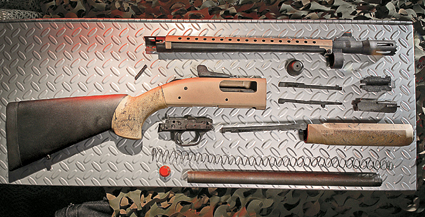 One of the reasons that Mossberg 590 shotguns are so popular with LE and military personnel is that they have relatively few parts, so there is less chance for a malfunction. These scatterguns are easy to operate and maintain.