by Nick Jacobellis
in Guns
0

There is nothing more exhilarating than hearing the orders to “Launch! Launch! Launch” over the PA system as you scramble to the flight line to board a U.S. Customs and Border Protection aircraft. The moment you strap in and don your headset you are part of a U.S. Customs and Border Protection (CBP) Office of Air and Marine aircrew that is about to get airborne. As the aircraft taxis to an active runway you listen to the radio for any additional information that will help you prepare for the mission at hand. The fact that we are a nation at war makes what you do seem even more important as the CBP Air and Marine Pilot in Command gently lifts your assigned aircraft into the air on another dangerous mission. Seconds later you are racing across U.S. territory to interdict a smuggler or fly an air-space security mission. The chase is on! 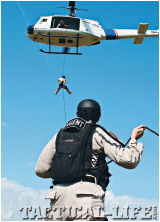 A 9/11 World
After the terrorist attacks on 9/11/01 the world that we knew changed in many ways. One of these changes involved the creation of the Department of Homeland Security. Instead of DHS becoming a security force on steroids such as a new and improved Federal Protective Service, Congress decided to make this new agency responsible for different types of domestic security missions including border security, airline security, maritime and port security, government building security and Presidential protection.

When it came to the issues of border security and immigration, DHS established two separate agencies to handle these matters. Criminal Investigators/Special Agents from the legacy U.S. Customs Service and the Immigration and Naturalization Service were assigned to a new agency called U.S. Immigration and Customs Enforcement (ICE), while the uniformed personnel from the U.S. Customs Service and the INS formed a new agency called U.S. Customs and Border Protection. The agency known as CBP includes the U.S. Border Patrol, the Office of Field Operations (uniformed inspectors) and the Office of Air and Marine. We will examine the Office of Air and Marine.