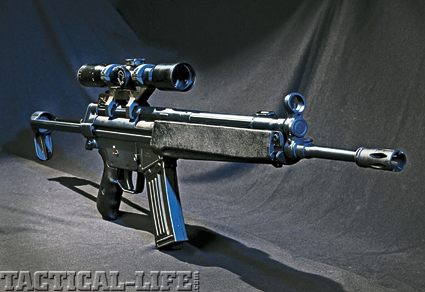 This HK93A3 collapsible-stock rifle has a Zeiss 1.5-6X scope on a quick-detach HK clamp mount.

When Russia and Germany created the earliest parachute troops, one of the problems faced was getting the paratroopers to the ground along with their weapons. Jumping with weapons created an array of difficulties. Most military rifles of the time were long and were likely to catch on the parachute lines or otherwise impede the jumper. Weapons also offered the possibility of injuring the jumper should the barrel or stock impact vital organs during a hard landing.

Because of these and other considerations, early German paratroops jumped with just a pistol and grenades while their rifles and SMGs were dropped in a separate case. This became a problem, however, when they encountered resistance upon landing because they had to fight their way to the drop case and extract their weapons. Later, jumping with an MP38 or MP40 SMG gave the paratrooper more range and firepower but still not as much as a rifle. The MP43/44, generally considered the first effective assault rifle, gave the German Fallschirmjager a more effective weapon, but it came too late in the war to use on major jumps. 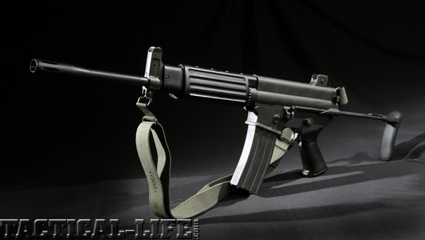 Korea’s Daewoo K1A1 has been used by ROK special ops units who appreciate the compactness with stock collapsed. Shown is the 19-inch barreled civilian K1.

Other World War II airborne troops tried other solutions. Japanese paratroopers had the Type 2 Paratroop rifle that could be broken into two sections. U.S. paratroops experimented with jumping with just a handgun and fighting knife and retrieving their rifles from drop containers in the German manner. However, later they jumped with Thompson SMGs or Garand rifles. A special jump case would include a disassembled Garand. After mid-1942, a special M1A1 carbine with side-folding stock was available, although some airborne troops continued to jump with the Garand for more range, or the Thompson for more firepower. Once the Sten gun was introduced, it became the primary jump weapon for British airborne troops. 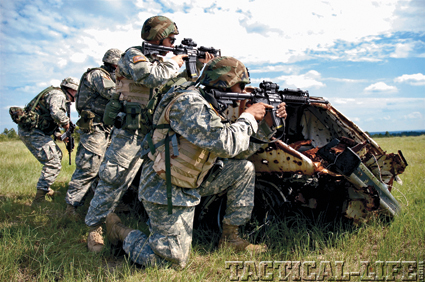 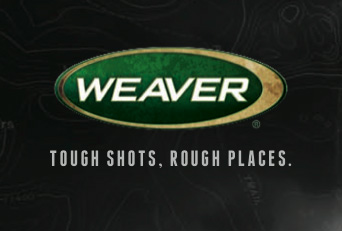 This HK93A3 collapsible-stock rifle has a Zeiss 1.5-6X scope on a quick-detach HK clamp…