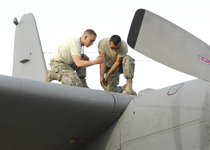 The mission was like any other, said Air Force Capt. Kelly Weber, a Compass Call pilot from Fort Worth, Texas.

“It was a very rewarding mission,” he said, noting he couldn’t discuss details due to operational security. Often called a “Super-E” model, some of the EC-130H aircraft are more than 40 years old. The aircraft’s electronics disrupt enemy command and control, and often are used to attack hostile communications.

“We’re a small community with a small inventory of aircraft,” said Air Force Lt. Col. Chris Kirschman, the squadron commander. “We’re 100 percent committed to the mission, and this couldn’t get done without our great maintainers on the ground.”

None of the three crewmembers discussing the mission was in the Air Force on Sept. 11, 2001, and they weren’t even aware it was such a monumental flight.

Air Force Staff Sgt. Ashley House, from Portsmouth, Va., said the mission was almost routine, as airmen from around the world are in the skies and on the ground supporting operations here.

The seven-hour mission was “very rewarding,” said Air Force 1st Lt. Lori Brophy, an electronic warfare officer from Raymond, Neb. “[The crewmembers are] very professional, and know what capabilities we bring to the fight.” 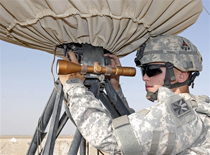