by Joshua Swanagon
in Guns, Handguns
0

Al “Scarface” Capone is one of this country’s most notorious crime figures. His legend has lived on to this day in numerous articles, books and movies. Likewise, he has been the model for countless criminal masterminds in the realm of fiction since his death. Recently, his family has opened the family treasure chest and is auctioning many of the mobster’s belongings. If you’ve ever wanted to own a connection to Al Capone’s past, his Colt .45 is the place to start. 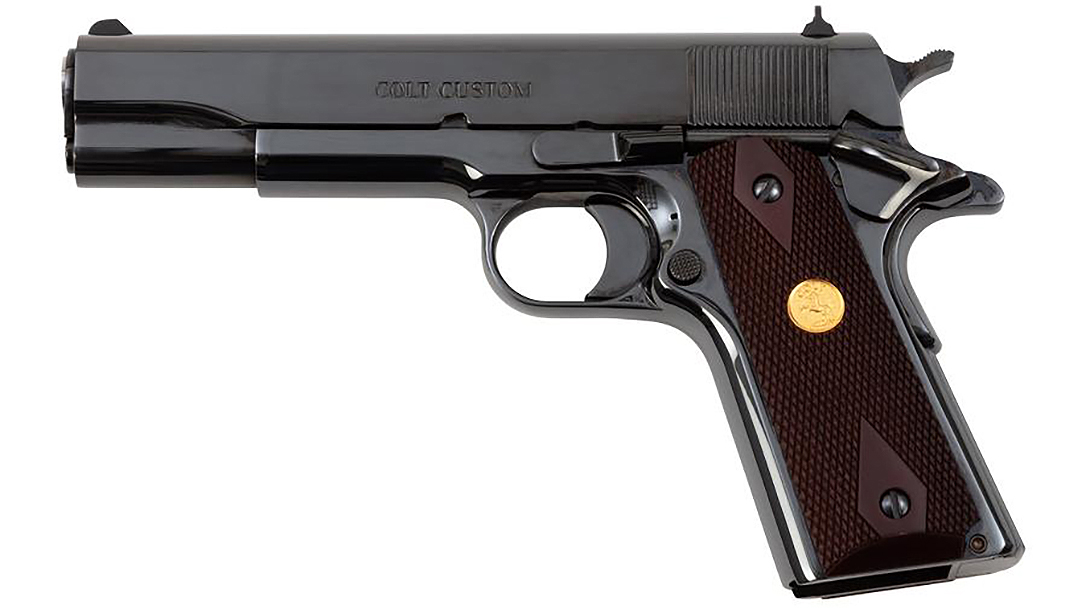 Up for auction on Witherell’s—Al Capone’s Colt .45 Automatic, carried by Capone and considered his favorite gun. The .45 caliber Colt model 1911 semi-automatic has a serial number of C 837. The entire slide features beautiful engraving down its length. They refinished the pistol at the time of engraving.

The handle features what appears to be stag grips that are listed in excellent condition. The blue finish is listed as “good as refinished.”

Provenance: Al Capone to Mae Capone to Sonny Capone to his daughters, uninterrupted.

A Life of Crime

Born in New York City, New York, to Italian immigrants in 1899, Al Capone entered a life of crime at a young age. As a teenager he joined the Five Points Gang acting as a bouncer for the organized crime outfit.

It was the move to Chicago in his early twenties that changed everything for the aspiring crime lord. He moved to Chicago at the request of Chicago Outfit enforcer Johnny Torrio. It was here that he began as a bouncer at a brothel, which would ultimately lead to his demise. During his time at the brothel, he contracted syphilis, for which he never sought attention.

Capone and Torrio ran a bootleg beer business until the murder of James “Big Jim” Colosimo. It was at this time that Torrio took over the empire, taking Capone as his bodyguard and right-hand man. The two became the head of the biggest crime group in the city, with designs to be negotiators of territory agreements.

Torrio’s stint as a negotiator didn’t last long, as a dispute arose between the North Side Gang and his allies, the Genna Brothers. When negotiations failed Torrio arranged for the murder of Dean O’Banion, the head of the North Side Gang. This fateful decision led to Hymie Weiss, who took O’Banion’s place, to make it a priority to get revenge.

Following the murder of O’Banion, The North Side Gang ambushed Capone, who was unhurt. However, twelve days later Torrio was not as lucky. Returning from a shopping trip the North Side Gang shot him several times. Following his recovery, Torrio resigned, handing control of the Chicago Outfit to a 26-year-old Capone.

With his newfound power, coupled by a huge bootlegging network and political and law-enforcement protection, he used more violent measures. To increase revenue, Capone went as far as blowing up establishments that refused to buy liquor from him. Many also considered him responsible for the rise of brothels in the city.

Capone’s character and personality made him somewhat of a national celebrity. The intrigue of a figure such as Capone captured the minds of the people. Capone was also known as a prolific philanthropist, donating to various charities and receiving the image of “modern-day Robin Hood.” This only helped to bolster his public image.

Over the following years Capone engaged in violent altercations with other crime bosses that left Chicago war torn. However, it wasn’t until the Saint Valentine’s Day Massacre that Capone lost public support and political and law enforcement allegiances. This one event would ultimately lead to Capone’s fall.

With his political and law enforcement protection at an end, a friend of President Herbert Hoover contacted him to intervene. It was the attention of Federal agencies, that led to various short prison sentences for prohibition violations and carrying concealed weapons. Most notably would be Al Capone’s favorite Colt .45 1911.

The newfound legal attention resulted in Capone being listed as the number one “public enemy.”

With the failure of law enforcement to keep Capone in prison they decided to turn their attention to tax evasion. While investigators focused on tax evasion, Eliot Ness and his team of Untouchables were attacking Capone’s operations. This inflicted major financial damage and led to an indictment of 5,000 violations of prohibition.

Initially filing a guilty plea in exchange for a 2 ½ year sentence, Capone rescinded the plea after the judge refused to honor it. It was then that the focus on tax evasion increased. By the end of the ordeal the government charged Capone with evasion of $215,000 in taxes on $1,038,654 income.

As the years progressed, so did the neurosyphilis, leading to Capone’s mental decline. He spent the final year of his sentence in the hospital section of Alcatraz. After serving his entire sentence they moved him from Alcatraz to Federal Correction Institution at Terminal Island to finish his contempt sentence. He received parole 11 months later when his wife appealed to the court, due to his reduced mental capabilities.

Approximately seven years later Al Capone suffered a stroke, followed by a cardiac arrest the next day. Al Capone was 48 years old when he died.

“What people don’t know is his personal story as a father and grandfather and his painful path of redemption while at Alcatraz,” said granddaughter Diane Patricia Capone, daughter of his only son, Sonny Capone. “That is the unknown Capone I talk about in my book and it’s the story that comes to life with these family treasures.”

Registration for the auction of Al Capone’s Colt .45 is open today, with a starting price of $50,000. For more information, please visit Witherells.com.