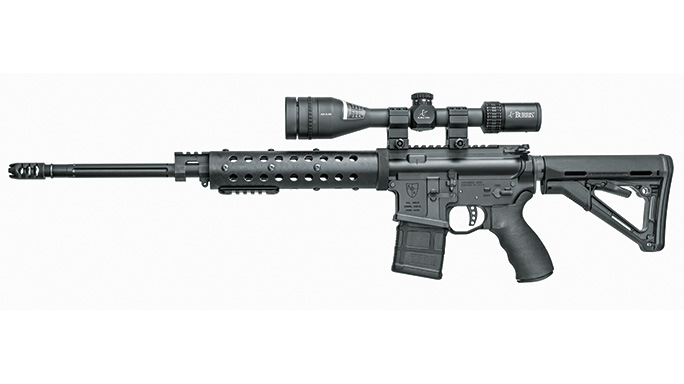 Alexander Arms’ Tactical Fluted Rifle is built to harness the powerful, SAAMI-certified 6.5 Grendel cartridge in a package tough and accurate enough for hog and deer hunts in the backwoods. Shown with a Burris 4.5-14x42mm AR scope.
Comment(s)

Anything but a stock 16-inch barreled AR chambered in .223 Remington/5.56mm NATO often takes months after it is ordered to be delivered to your local gun shop. These are the times we live in, where the demand for semi-custom rifles is so great that production backlogs and long waits are common. One rifle that is well worth the wait, if any, is an Alexander Arms model chambered for the 6.5 Grendel.

When I received this assignment to review this Alexander Arms rifle chambered in the “new” 6.5 Grendel, I wasn’t unfamiliar with the rifle or cartridge. Over the past few years, I have tested and evaluated five different AR-platform rifles chambered in this cartridge that were built by four different manufacturers. As a fan of .264-caliber bullets for long-range shooting and hunting whitetail-sized game, it didn’t take very many rounds downrange to realize this cartridge was a winner.

This year marks the 12th anniversary of the 6.5 Grendel. In January 2003, Bill Alexander and Lapua engineer Janne Phohjoispaa began working together to design and finalize the dimensions of the 6.5 Grendel cartridge. Their initial thoughts of basing the cartridge on the PPC case took a backseat to basing it on the .220 Russian, owing to the fact that Lapua was already producing the .220 Russian brass. Their new case design was dramatically different than an earlier PPC-based cartridge Arne Brennan and Alexander initially designed. The final version placed the cartridge shoulder differently and increased case capacity. Keeping in mind that it would feed in autoloaders, the case neck was beefed up, too. In November 2003, Bill Alexander placed his first order for 50,000 cases from Lapua and JGS produced the first chamber reamers for the Grendel. A few weeks later, Alexander introduced the 6.5 Grendel at an industry trade show.

Bill Alexander, founder and chief product designer for the company that wears his name, started Alexander Arms based on his belief in the design of the .50 Beowulf cartridge. Bill has worked in the armament industry his entire professional career. He spent time with the British Army designing artillery armor and small weapons. He then went on to several classified projects for both the British and the U.S. federal government. He started Alexander Arms in 2001.

As with many new “wildcat” cartridges that are transitioning into the mainstream, expansion into other ammunition companies offers it more exposure and legitimacy. In February 2007, Wolf Performance Ammunition introduced a 123-grain soft point and a 120-grain multi-purpose, hollow-point boat-tail (HPBT) load in its Gold line. Two and a half years later, Hornady joined the effort by producing 6.5 Grendel factory ammunition, bullets dedicated for the cartridge and cartridge cases.

The final leap for the 6.5 Grendel came in February 2012, when the Sporting Arms and Ammunition Manufacturers Institute (SAAMI) adopted the 6.5 Grendel as an official cartridge. As a result of the cartridge’s official recognition, Alexander Arms had to relinquish the trademark “6.5 Grendel.”

“One of the primary purposes of trademarking the name was to protect the integrity of the original cartridge design,” Bill Alexander said. “With the adoption of the 6.5 Grendel cartridge standard by SAAMI, the design is now protected and any confusion in the marketplace as to the specification of the cartridge has been eliminated.”

Through the standardization process, Alexander didn’t need to modify the chamber dimensions for the cartridge, as he feared. Hence the “new” 6.5 Grendel, mentioned previously, is its upgraded status within the firearms industry. “When we did the cartridge, we never thought it would get as far as SAAMI,” Alexander said. “We did the trademark and hoped one day that there would be an acceptance. When it got to SAAMI, we got into a bit of a kerfuffle. Is there anything we need to do? We’ve got that double-throat angle thing, and we got nervous that SAAMI would throw it back to us. They said the .303 Enfield and the .318 Rigby had the same thing, and they just signed off on the thing. It was drama free. Their biggest hurdle was that they didn’t want to approve a trademarked cartridge. We ourselves and Hornady were very pleased. All those early adopters that put their money up [to buy 6.5 Grendel rifles] got the best of it.”

Over the past few seasons, the 6.5 Grendel has proven itself as a fantastic whitetail cartridge. Well-constructed bullets driven at the velocities possible with a short-barreled AR put deer down quickly. I’ve used it to kill deer ranging from big-bodied mature bucks to doing “doe patrol” to fill the freezer. This rifle was easy to carry last season, and helped put meat on the table. Last season, one of my Mississippi friends asked me to help reduce his farm’s doe numbers to assist with herd management. In addition to culling a few does, it did a good job hammering wild hogs that had been invading his lush food plots and destroying them.

Alexander Arms’ 6.5 Grendel Tactical Fluted Rifle wears a 16-inch, fully fluted, chrome-lined barrel. The barrel is housed within a free-floating composite handguard, which helps cut weight and makes this rifle a breeze to carry. The muzzle has 9/16×24 threading with an A2-style flash suppressor installed.

The handguard on this rifle is one of my favorites for a hunting AR. Its advanced G10 construction offers heat, cold and chemical resistance while being lightweight and easy to grip. Its upper vents help dissipate barrel heat and reduce mirage. The handguard has a 2-inch diameter, which requires the use of a low-profile gas block. It’s also free-floated and includes a 7075 aluminum barrel nut. The handguard, 9 inches long overall, also has corrosion-resistant, threaded inserts for attaching 3-inch Picatinny rail sections per user requirements. The rails attach to the threaded inserts via Allen-head screws.

Aside from the technical specs, I like the handguard on this rifle for practical reasons. While hunting in cold conditions, it doesn’t work like a heat sink and freeze bare hands like a metal handguard. The composite plastic handguard is lighter than an aluminum handguard, saving a few ounces that you have to lug around.

This rifle came equipped with Alexander Arms’ tactical trigger, which is suitable for close-quarters battle (CQB), mid-range work as well as hunting. It is also well suited for use in designated marksman rifles. The trigger is a non- adjustable single-stage unit, and is not considered a match trigger. According to Bill Alexander, the tactical trigger unit has been designed specifically for field use and does not share a common heritage with a target trigger. For this reason, it is not recommended for target-type shooting, although it may be used with some success in this discipline. The trigger is basically a single-stage unit with a bushing-mounted disconnector, which is adjustable for engagement and overtravel. The pull weight and disconnector engagement are fixed to ensure durability during hard use and inclement environments.

The trigger bow is intentionally narrower than those commonly found on target-type triggers. This serves as an accurate reference for the trigger finger if the unit is used with gloves or in cold or wet conditions. The pull weight allows manipulation of the trigger with gloves while minimizing the possibility of discharging a round unexpectedly in the manner of a target trigger. In extreme cold conditions, the trigger can still be used with mitts with the triggerguard pivoted down, although the manufacturer does not recommend this practice. This rifle’s trigger breaks clean with minimal overtravel. The peak weight of the trigger on my test rifle was a consistent 4 pounds. Alexander attributes the long life for this fire control group to its Thin Dense Chrome (TDC) coating, which prevents corrosion, as well as an IonBond coating that increases the life of the part, reduces friction and improves performance and reliability by reducing wear.

Since I wanted to set up this rifle as a woods gun for whitetails, I mounted a Vortex 1-4×24 Razor HD in a set of Vortex 30mm rings. I shot several five-shot groups from a bench at 100 yards to get a feel for the rifle and retest loads that I have fired in several 6.5 Grendel rifles.

The first test load was Alexander Arms’ own 120-grain Nosler ammunition. This one averaged 2,510 fps, and posted a best group measuring 1.41 inches. I’m sure I could have improved the group size if I had used an optic with higher magnification. The next load was Hornady’s 123-grain A-MAX load, which averaged 2,502 fps. Its best 100-yard group measured 1.13 inches.

In summary, the configuration of this rifle and cartridge makes for a great whitetail rig in most places this species is hunted. It’s lightweight and efficient, and you can be sure that this rifle will continue to accompany me on hunts for years to come. 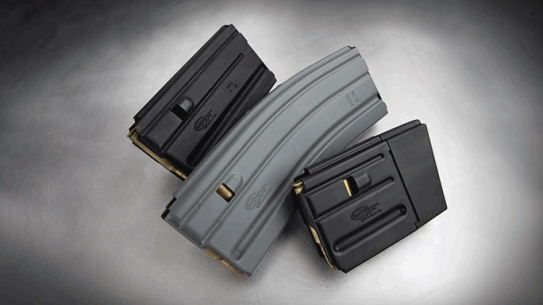 The SureFeed magazine from Okay Industries features bodies and floor plates that are made...