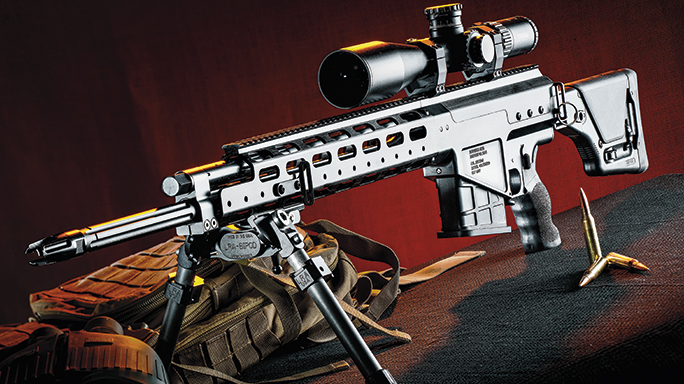 1 of 7
.338 War Hammer: Alexander Arms’ Ulfberht
Named after an uncommonly strong type of Viking sword, the Ulfberht is tank-tough and accurate at extreme distances. Shown with a Steiner 5-25x56mm MSR scope and an LRA bipod. 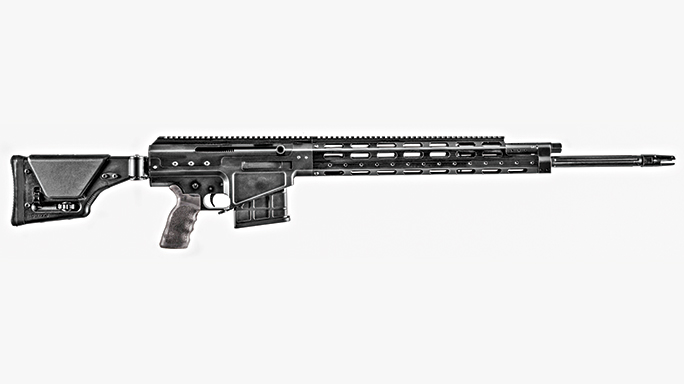 2 of 7
.338 War Hammer: Alexander Arms’ Ulfberht
“The Ulfberht was built to dominate, and I imagine it would do just fine in that endeavor.” 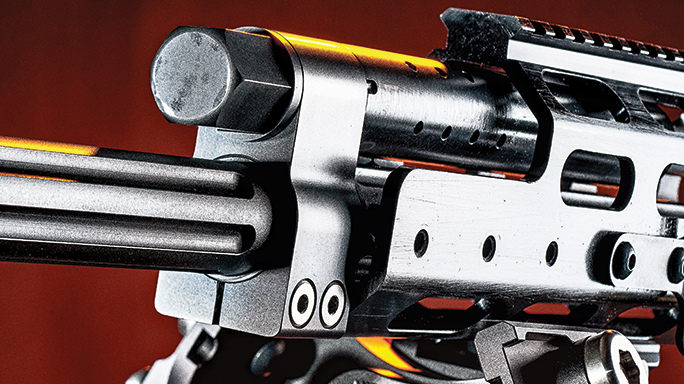 3 of 7
.338 War Hammer: Alexander Arms’ Ulfberht
Above the fluted barrel, at the front of the handguard, is an adjustable gas block that allows users to fine-tune the Ulfberht rifle to specific mission requirements. 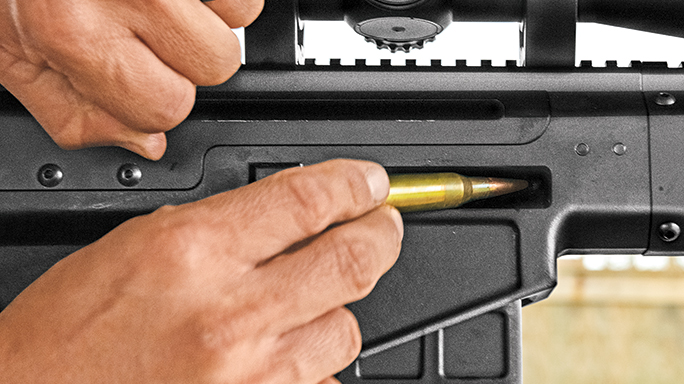 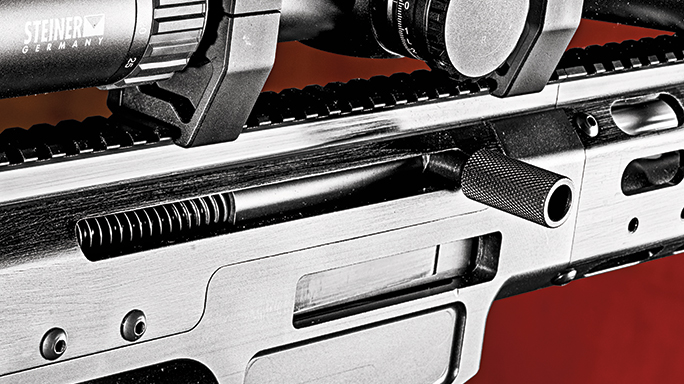 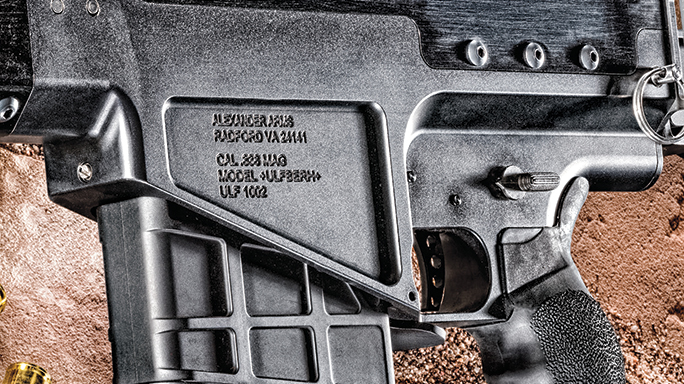 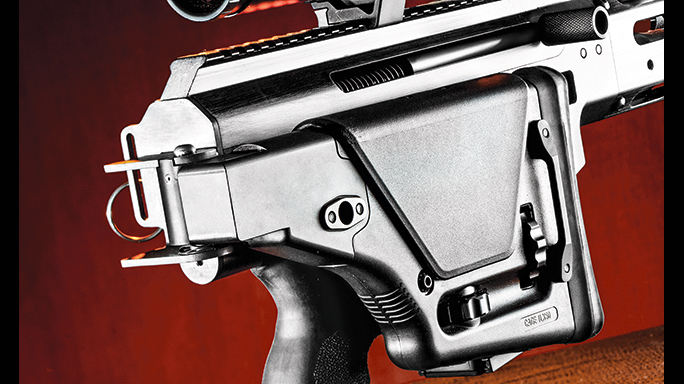 7 of 7
.338 War Hammer: Alexander Arms’ Ulfberht
The adjustable Magpul PRS buttstock is installed on a sturdy hinge that allows it to fold to the right side of the receiver. 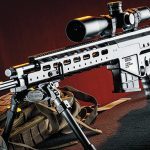 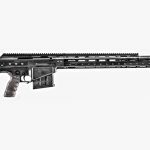 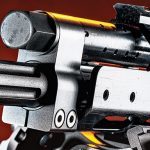 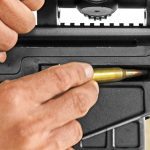 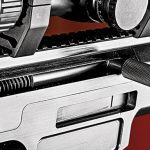 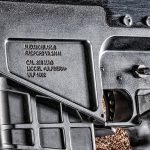 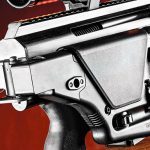 Semi-autos make it easy to watch your hits without having to come off the rifle. Unfortunately, big-bore semi-autos have had a rocky history. Cold-bore consistency with early .308 Winchester/7.62mm NATO ARs was dismal. M1A rifles were better, but equipping and maintaining them could be costly. Thankfully modern big-bore ARs have leapt forward exponentially lately in terms of accuracy and reliability. Naturally, this has all led the way for military and police snipers to use similar platforms but with larger chamberings and more power.

The .338 Lapua Magnum is currently the most popular intermediate soft-target cartridge for militaries and even a few police agencies. While the .50 BMG works as an anti-materiel cartridge, it ‘s just not practical for much else. Big .50s are heavy, with major recoil and punishing muzzle blasts. While their penetration is impressive, it’s too much for urban work. Operators needed a rifle that bridged the gap between the .308 and the .50. For years, the .300 Winchester Magnum filled that role in America, but it’s not much more than a faster .308. The rest of the world has been using the .338 Lapua with great success. The U.S. is finally recognizing its value, as shown by SOCOM’s selection of the Remington MSR in 2013. What we needed next was inevitable: a semi-auto .338 Lapua.

Building a reliable semi-auto in .338 Lapua Magnum is not easy. With the increase in scale, you’ll also run into an increase in problems. The magazines have to run flawlessly, and this alone has taken companies a few years to work out. Several companies have their own takes on semi-auto .338s, and I’ve tested most of them. Some focus on portability while others try to cut down on weight, and various gas systems are used. One company, Alexander Arms, has unveiled a rather innovative design—the Ulfberht.

Bill Alexander of Alexander Arms is known for building tough, reliable and proven AR-based rifles. He’s always looking to improve on the 5.56mm NATO cartridge, and his 6.5 Grendel does that nicely while his .50 Beowulf provides serious energy on target in a compact package designed for close quarters. So it only makes sense that Bill would work with another powerhouse cartridge, the .338 Lapua, to create his semi-auto Ulfberht.

First off, everything about the Ulfberht is built to last. The rifle starts with a forged 9310 steel receiver and an aluminum top cover. The 27.5-inch, 4150 chrome-moly barrel features six-groove, 1-in-9.3-inch-twist, Enfield- pattern rifling. The muzzle sports 18×1.5 threading—a common European .338 Lapua thread pattern—and comes equipped with a three-prong flash suppressor made of 4140 steel.

Another special feature is the rifle’s adjustable gas piston operating system. The gas block is made of casehardened 8620 steel while the carrier, bolt and extractor are all made from 17-4 precipitation-hardened stainless steel. The recoil springs are rated for 6 million cycles. The twin ejectors are crafted from S7 tool steel, and the locking lugs are made from hardened 8620 steel. A large charging handle is mounted on the right side of the receiver.

Surrounding the barrel and piston system is a hardcoat anodized aluminum handguard with a long top rail that mates up with the receiver’s for a full-length, 30-MOA-offset mounting platform for scopes and accessories. The handguard features several lightening cuts, and its smooth sides and bottom are drilled and tapped for adding accessory rails where needed.

The Ulfberht comes with a folding Magpul PRS stock for easier carry and transport. Mounted solidly to the receiver with a steel hinge, the stock locks into place when it’s folded and extended. You can release the stock with one hand using the top-mounted release button. Also, the PRS design features thumbwheels that allow you to adjust the length of pull and cheek height with just your fingers.

The pistol grip is a Hogue Deluxe model, while the safety is similar to an AR’s. As for the trigger, a Geissele Automatics two-stage, 4.5-pound SSA unit is installed. A paddle-style magazine release is located just in front of the triggerguard. The Ulfberht uses Alexander Arms’ own reinforced-polymer, double-stack, 10-round magazines. My test Ulfberht came in a hard case with custom-fitted foam inserts and four magazines.

For optics, Bill Alexander was kind enough to send along a Steiner 5-25x56mm M5Xi Military scope with an H59 reticle as well as a set of Seekins Precision rings of the proper height.

To really test the Ulfberht, I took it along with me to Pump Precision Rifle Training in Washington, Texas, which is run by Chase “Pump” Stroud. Chase has been a top Precision Rifle Series (PRS) competitor for years, and he teaches several top-notch long-range courses.

With a strong storm coming in, we jumped right into Chase’s Extreme Long-Range (ELR) training on the first day. I removed the Ulfberht from its case and zeroed it with Barnes’ 300-grain OTM ammo. I was on paper in less than five rounds with a group measuring about an inch wide. Using a combination of my new Kestrel 5500 and Chase’s experience, we dialed in the 500-yard elevation and confirmed our zero with five rounds on a 12-inch steel target. I put a final confirmation in the dead center of a 3-inch hostage-taker target prior to moving to 800 yards.

At 800 yards, the Ulfberht proved just as accurate, with five consecutive hits on steel. Moving to 1,000 and then 1,100 yards, it was almost too simple to make hits. Thanks to superb wind calls from Chase, I was on target on my second round and hitting steel at 1,100 yards about as fast as I could pull the trigger. The Ulfberht’s recoil is typical for a .338 Lapua semi-auto—not substantial but noticeable. Once locked in position, the rifle stayed in place while firing, moving to the rear with little muzzle rise. For support, I used an Atlas bipod along with a Wiebad Pump Pillow at the rear.

The plan was to shoot out to a mile, but Mother Nature made that impossible. A supercell quickly moved in, and rather than risk lightning and getting soaked, we settled for just under a mile at 1,625 yards. Shooting from prone, I dialed up the 21 or so mils of elevation. The Steiner scope made this easy. Adjustments based on calls were made using the H59 reticle. Chase called the wind and hits using a spotting scope. The target was a 36-by-36-inch white steel square with a 12-inch orange circle in the middle. On steel on the third round, I fired the remaining seven shots in the magazine as quickly as I could reacquire my hold and let the trigger reset. Five of the remaining seven shots hit steel, and the last three clustered inside 6 inches on the edge of the center circle. Chase then climbed behind the rifle, held for wind and proceeded to cluster three out of five rounds around the center circle, leaving little doubt as to the Ulfberht’s capabilities.

Severe weather kept the Ulfberht at bay until I could return to my home range. Of course, shooting groups at 100 yards with a .338 Lapua Magnum can be a bit problematic. In my experience, these rifles often group better at 300 yards, and semi-autos require a whole other set of skills and positioning to ensure you are not adding to the equation.

Nonetheless, the Ulfberht created some pretty impressive groups at 100 yards. My best 100-yard group measured right at 0.6 inches using Desert Tech’s 300-grain SMK ammunition. This load might as well be handloaded because of its accuracy. The 300-grain Barnes OTM ammo created a best five-shot group measuring 0.75 inches. Groups at 300 yards with both loads were right at an inch. The more I used the Ulfberht, the better it dialed in, making for some very solid accuracy.

The Ulfberht has a user-adjustable, five-position gas system with “zero” being off (no gas). Position one is for high-pressure ammunition and two is for general use, including most 300-grain ammunition. I mostly used the rifle with the gas system in position two, and it ran very reliably.

Like most .338 semi-autos, the Ulfberht’s bolt doesn’t lock back after the last round is fired. My guess is that it would be very hard on magazine followers, and it mimics a bolt rifle in application. If single-loading is required, you can simply hold the bolt open, drop in a round and run the bolt with ease.

The Ulfberht’s ergonomics are excellent. It was easy to get set up properly. If extended shooting were in order, some might need a thicker recoil pad. The buttstock is very solid, as is every other aspect of this .338 Lapua Magnum rifle. The Ulfberht was built to dominate, and I imagine it would do just fine in that endeavor.

The Ulfberht is no lightweight at just under 20 pounds unloaded. Add a scope and a loaded magazine and you are pushing 25 pounds. Bill Alexander tells me this is an SR1 model. The SR2 and SR3 are in final testing. Apparently a 22-inch barrel along with some titanium and carbon-fiber components will make the SR2 a bit handier. Full-time suppression is the plan for the SR2. Given how this rifle performed, any future iteration should be impressive. If you are in the market for a serious .338 Lapua semi-auto built to last, the Ulfberht needs to be very high on your list.