Most U.S. shooters don’t recognize the BM59. Mine, which I’ve had at the range over the years, has been at a local gunshop—the owner wanted to compare it with a BM59 he had just taken in. I can only think of one instance when someone had come up and said, “Wow, a BM59!” Generally, observers think it’s either an M14 or, if they know M14s are Class III weapons, an M1A. Occasionally, someone thinks it’s a Garand converted to take a magazine, which isn’t all that far off.

The post–World War II Italian Army was equipped with the U.S. M1 Garand. In some cases, they were refurbished by Beretta. Later, Beretta actually produced them. Some consider Beretta-made Garands among the best. However, once NATO adopted the 7.62x51mm in the mid-1950s, other European armies were fielding more-modern battle rifles such as Heckler and Koch’s G3 and the FN FAL. To meet Italian demand for more-modern rifles, Beretta created the BM59 by making some modifications to the Garand while retaining as many of its parts as possible. Among those modifications were incorporating a magazine well to take a 20-round detachable box magazine, converting to select fire, building in a flash suppressor/grenade launcher (often designated a tri-compensator) and adding a grenade-launcher sight that, when raised, automatically cuts off the gas valve.

After its adoption in 1959, various models of the BM59 were created: the standard BM59 Mk I had a wooden stock similar to that of the Garand; the BM59 Mk II had a wooden stock that incorporated a pistol grip for better control when firing in full auto; the BM59 Mk III Alpini was designed for Alpine troops and incorporated a folding stock with a pistol grip (a paratrooper model had the same stock but a shorter barrel and shorter flash suppressor); and the BM59 Mk IV had a heavier barrel, polymer stock and was intended to serve as a squad automatic weapon. Many of these versions were equipped with a bipod.

In the early 1970s, I had a chance to fire a standard BM59 Mk I in Italy and liked it. The selector switch was on the left side of the receiver and allowed the shooter to select between semi- or full-auto fire. I had also fired a squad automatic versions in Nigeria and Indonesia, two places where BM59s were manufactured under license. The Alpini and Para models looked intriguing to me, so when I found out that the semi-auto versions had come to the U.S., I looked for them. I was unsuccessful, and then the Clinton Assault Weapons Ban went into effect. But along the way, I did pick up a BM62, and a couple of years ago, a friend who had been charged with selling his uncle’s firearms collection offered me the semi-auto BM59 Alpini—I jumped on it. 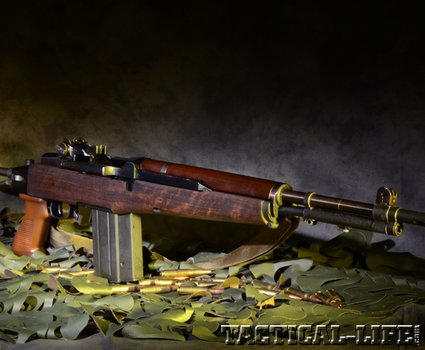 A limited number (an estimated 200) of Beretta-produced BM59 semi-autos were imported into the U.S. It’s believed that Springfield Armory also imported some unfinished Beretta semi-auto receivers and assembled some BM59s on them. (The Springfield BM59s should have serial numbers below 4,000.) The BM62, which lacked the tri-compensator but had a fancier stock, was designed as a semi-auto “sporter” for export. A BM69 was also designed as a semi-auto export model and retained most of the BM59 Mk I’s features.

Additionally, there are versions of the BM59 that were produced (using parts kits) in the U.S. as re-manufactured M1 Garands. Since Beretta military rifles were primarily re-manufactured Garands, this does not make the U.S.-produced Garands completely undesirable. However BM59s from different re-manufacturers vary quite a bit in quality. Those from Springfield are generally quite good, and my National Ordance re-manufactured BM59 Alpini has performed well, though it doesn’t take the BM59 bipod since it uses a Garand gas cylinder instead of the Beretta BM59’s. It does, however, have the true Beretta BM59 Mk III folding stock.

The BM59 Alpini retains the later-type Garand sights, which are quite usable. The rear peep is click adjustable for windage and elevation in approximately 1-MOA increments, while the front post is large enough to see well and is protected by twin ears. In front of the rear sight, my BM59 Alpini retains the Garand’s stripper-clip guide. With a detachable box magazine use of stripper clips is not necessary, but they do allow the magazine to be quickly topped off without removing it from the rifle. Standard 7.61x51mm NATO stripper clips work dandy in the BM59. In fact, it’s been written that Italian troops were normally only issued one magazine with their BM59 and were expected to reload the magazine with stripper clips. This explains why BM59 spare mags are hard to find.

There’s a lot to like about the BM59 Alpini’s paddle magazine release. It may be operated readily with the support hand while removing and empty magazine. Proprietary BM59 magazines resemble M14, FAL and G3 magazines but are not interchangeable with any of them.

My National Ordnance BM59 has a very basic flash suppressor with three slots. As with the Garand, the safety for the BM59 is located in front of the triggerguard. Its L-shape makes it easier to apply than the typical Garand safety. With practice it can be pushed off with the knuckle of the trigger finger as it enters the triggerguard. 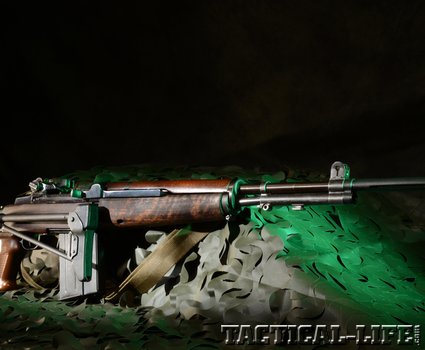 The Alpini/Para folding stock releases easily by depressing a large button on top of the stock. It may then be folded along the right side of the BM59’s stock. To release and deploy the stock, the button must be depressed again. The buttplate is collapsed by depressing a button and pushing one of the struts. The rifle may be fired with the stock folded, though, in my experience, in this configuration the trigger finger may get banged against the stock’s lower strut due to recoil. (That’s probably why the strut is designed to be pushed up when the buttplate is folded.) Speaking of recoil, the folding stock’s butt is not well designed for comfort when shooting. Overall, the folding stock makes the rifle look high speed, but the fixed-stock BM59s are definitely easier to shoot. Also noteworthy are the sling swivels on the side of the stock, which allow the BM59 Alpini to be easily slung across the back with the stock deployed or folded.

While working on this article I took my BM59 Alpini out and fired 100 rounds to get re-acquainted. It’s a very good battle rifle for its time. It was contemporaneous with early FN FALs, early G3s and the M14. By today’s standards it is heavy and has parts that stick out. On the positive side, Italy was still recovering financially from WWII when the BM59 was introduced, and the fact they could alter Garands already in the inventory allowed considerable cost savings. It also saved training time, as the troops were already familiar with the Garand.

The L-shaped safety offers more leverage when applying it and allows operation without banging the finger into the magazine or magazine release. The iron sights are as good or better than those of some other WWII-era battle rifles, but as I was shooting the BM59, I realized how spoiled I had grown using ACOGs, ELCANs and other optical sights on battle rifles.

I would certainly recommend that, if you get a chance to shoot a BM59, do so. There are some true select-fire BM59s in the U.S., and some are even fully transferable. If you know a dealer or collector with a licensed Class III BM59, buy a few hundred rounds of 7.62x51mm NATO ammo and give it a try. 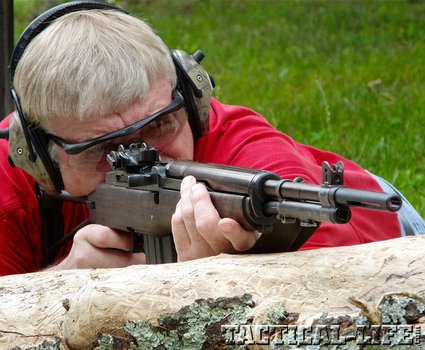 Thompson firing the BM59 Alpini from the offhand position. Note that this re-manufactured rifle does not have the Tri-Compensator used on the original.