“…you have to earn that Trident every day. We never stop learning, never stop training…Okay, okay, we do have our own little brand of arrogance. But we paid for every last drop of that sin in sweat, blood, and brutally hard work.”

The source of that quote is a proud bearer of a Trident. He’s a Navy SEAL who knows what he’s talking about, and he talks a lot about what it takes to become a SEAL and what it’s like to fight in SEAL operations behind enemy lines in the amazing book, Lone Survivor. Published in June ’07 by Little, Brown and Company, the book by Marcus Luttrell with Patrick Robinson has been a huge national bestseller.

Your TW staffers cheered the success of the book, for no other account of the fighting in Afghanistan on the northern Pakistani border is as gripping as Luttrell’s. A Petty Officer when the action occurred, team leader Luttrell was the sole survivor of SEAL Team 10 in Operation Redwing. The book is a story of courage, sacrifice and endurance, described at the highest level of moment-by-moment intensity. Every member of SEAL Team 10 was a hero. Only Luttrell lived to tell their story.

Our country is fortunate indeed to have heroes like Luttrell—and all the high-level Special Operations personnel like SEALS, Rangers and S.W.A.T. teams. Behind them are other uniformed military and civilian professionals whose own “badges” and oaths are really no different than those earned by the highly sharpened combat teams of the elite SEALs and Special Forces, for these “ordinary” personnel have also promised to do their best. No one can do more—whether dropping from a helicopter behind al Qaeda lines, taking on a crazed shooter terrorizing a community, or checking out the trunk of a suspicious vehicle. America is full of uniformed heroes waiting to happen.

Doing one’s best depends upon more than the oath to make it happen. Without the latest training and equipment, the guts and sweat of an individual officer or soldier can be wasted. That’s why the real pros honor their commitment by not only training hard, but by staying sharp on tactics and gear that make their jobs more efficient.

In this issue, we’re serving up a galaxy of new weapons, including: the MK 48 MOD 1, nine pounds lighter than the M240B in 7.62 and being tested by SpecOps in fast-moving operations in Afghan Taliban terrain; sniper firepower for law enforcement and military in the BLASER TAC-2 .338; the multi-mission LMT .308 Patrol Rifle, a modular weapon system; less lethal for mean streets; the latest on what’s in the machine-gun and grenade launcher pipelines; a tack-driver combat rifle from JP Enterprises, the LRP-07 in .308, a sniper weapon for the urban battlefield; an in-depth look at the RPGs being used by the Taliban in Afghanistan; plus too much other stuff to list.

The latest in training operations are featured in an exclusive visit with the 82nd Airborne’s Squad Designated Marksmen training; an on-site visit with the National Patrol Rifle Conference, with advanced uniformed officer training; maritime counter-terror ops; and close-quarters combat gear and techniques with short-barreled shotguns and dynamic entry tools.

America’s law enforcement officers and military personnel have the weapons and the training to use them. And whether their badge is a Trident or a shield, we always get the best they have to give. 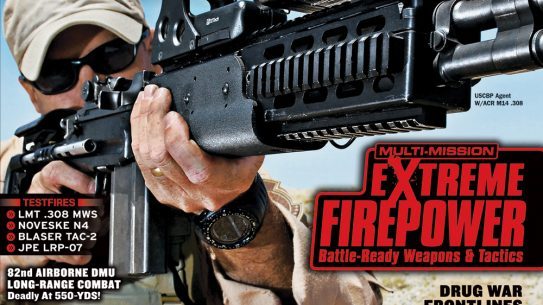 “…you have to earn that Trident every day. We never stop learning, never stop…