by Paul Scarlata
in Guns, Handguns
0

"For those persons who prefer a full-sized 1911 for police service or concealed carry, the FXH-45’s lack of mass makes it a perfect choice for comfortable, all-day carry. And it can do double (triple?) duty as a home/business defense gun or for competition."

In the 1970s, a German company introduced a semi-automatic pistol that utilized a frame and internal components made from high-tech synthetic polymer. Such a radical concept shook many handgun traditionalists to their very cores, and they were quick to voice their disdain of these so-called “Tupperware pistols.” And it didn’t take the anti-gun crowd long to claim (wrongly) that these pistols might be able to circumvent metal detectors in airports.

The traditionalists scoffed at the idea that a “plastic” pistol could stand up to extensive use and reiterated their belief that handguns should be made from real steel, or at least aluminum alloy. To my experience, the most vocal of these scoffers were partisans of the 1911 pistol, many of whom believed that no improvements in handguns had been made, or were even possible, since the year 1911. Well, as I am wont to say, it wasn’t the first time they were wrong, and it probably won’t be the last!

The advantages provided by polymer construction are numerous, but the most prominent are production costs, weight and durability. Polymer frames are produced by an injection molding process that is faster and cheaper than machining metal. These pistols weigh less, even when loaded, than most metal-framed pistols of the same size and class, making them much more practical for all-day carry. Lastly, despite dire predictions to the contrary, polymer-framed pistols proved they could stand up to extensive use—and abuse—as well as, if not better than, metal-framed pistols.

Because of these features, polymer-framed pistols proved so popular that today they dominate the law enforcement, military and civilian markets. As these things tend to happen, once the advantages of polymers became apparent, a number of companies began offering that icon of pistoldom, the 1911, with polymer frames. One of these is American Tactical, whose newest addition to its extensive line of 1911 pistols is the 100-percent American-made Firepower Xtreme Hybrid in .45 ACP, or simply the FXH-45.

Upon picking up an FXH-45, the first thing you’ll realize is its weight. It’s light—I mean really,really light. The one I received for testing registered a mere 27.5 ounces on my postage scale. This means that its polymer frame shaves about 10 ounces off its weight when compared to your average Government Model 1911.

The stainless steel slide features a black nitride finish and sharply cut grasping grooves at the front and rear that allow you to retract it reliably with different grips, even with wet, oily or gloved hands. There are three ports on each side of the muzzle end of the slide that not only provide a distinctive appearance—along with the angular reliefs cuts running along the top and sides of the slide—but also keep the slide’s weight within the correct limits for reliable functioning with various ammunition types. Note, however, that the barrel is not ported, and no powder gases are vented out of these ports, making the FXH-45 completely legal for use in USPSA’s Single Stack division and IDPA competitions.

As is de rigueur on quality 1911s today, a lowered and flared ejection port ensures that spent cases get out of the way quickly and reliably. At the rear of the slide is a plate held in place by a pair of Torx screws. Removing the plate allows the shooter to attach an American Tactical Optic Mount for Trijicon RMR and Burris FastFire reflex sights.

I heartily dislike three-dot sights, as I unconsciously waste time trying to line them up, and for this reason I was happy to see that the FXH-45 was fitted with my preferred setup—a red fiber-optic front sight and a plain black rear sight. These allow me to quickly acquire a sight picture and transition between targets much faster. For those who wish to change the sights, the slide is cut to accept aftermarket Glock-style sights.

American Tactical fits the pistol with a match-grade, 5-inch, stainless steel barrel while the recoil system and internal extractor are exactly the way John Moses Browning designed them.

Two 7075-T6 aluminum inserts within the frame provide rigidity and strength while the slide reciprocates on rails on a hardened alloy insert in the frame.

Integral finger grooves grace the frontstrap of the frame, which has a radically undercut triggerguard that permits the shooter to get a very high grip on the pistol for enhanced recoil control. A sharply checkered mainspring housing combines with the finger grooves to provide an extremely secure purchase for improved handling. A Picatinny-type rail on the dust cover permits the mounting of tactical lights or lasers.

Those Southpaws among us will be happy to see an ambidextrous thumb safety, while both right- and left-handed shooters will appreciate the extended beavertail grip safety. A nice extra—and something lacking on the majority of polymer-framed pistols—is that the FXH-45’s grip panels can be replaced with any aftermarket 1911 grips. 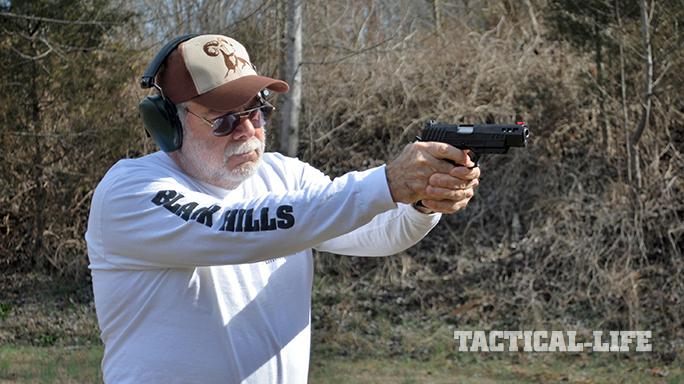 My wife, Becky, and I traveled to our gun club to run the FXH-45 through its paces. We started testing it for accuracy by firing five-shot groups at 25 yards. We proceeded to do so with the assistance of an MTM K-Zone pistol rest and four factory loads with bullets of widely varying weights. It’s well known that 1911 pistols often have to be tuned to run reliably with the traditional 200-grain LSWC target loads, but we were pleased to see that the FXH-45 ate the Black Hills load with nary a bobble or burp.

I have been getting bored with perforating cardboard combat targets, so, to see how the FXH-45 performed off-hand, we moved over to the next berm, where my club had set up an array of six 8-inch steel plates. Using an extended 10-round magazine from Wilson Combat (you can never have too much ammo, right?) I ran the plates a half-dozen times.

Thanks to the FXH-45’s excellent sights and the polymer frame’s propensity to flex and absorb recoil, we were able to ring the steel plates with pleasing regularity and rarely had to fire more than six rounds. I should add that we did not experience a single malfunction with the FXH-45 during our test firing, and for an out-of-the-box 1911, that is high praise indeed. My only complaint was that on occasion the lips of magazines hung up on the edge of the magazine well while performing fast reloads. I believe that a modest magazine well funnel would be a most welcome addition without adding very much to the pistol’s price. 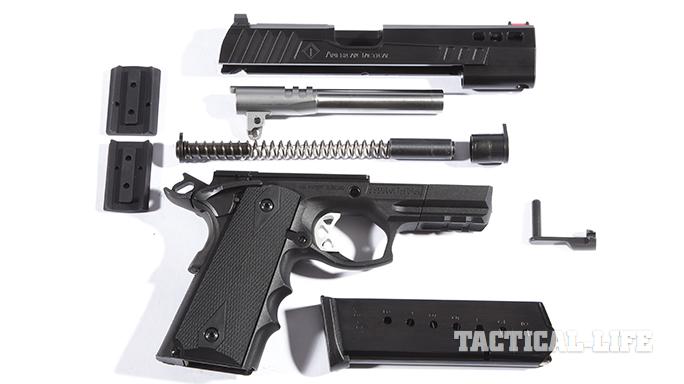 For those persons who prefer a full-sized 1911 for police service or concealed carry, the FXH-45’s lack of mass makes it a perfect choice for comfortable, all-day carry. And it can do double (triple?) duty as a home/business defense gun or for competition.

I’m sure some of the aforementioned traditionalists out there are rolling their eyes (if not grinding their teeth) when I say this, but I believe that polymer frame technology might just be the means to ensure that the 1911’s popularity continues well into the 21st century. After all, if you can’t beat them, join them.

This article was originally published in “America’s Handgun Model 1911” 2017. To order a copy, visit outdoorgroupstore.com.