Let’s face it, as cops we have enough stuff to carry around on a day-to-day basis that there isn’t room to add a few magazine pouches for a couple of 30-shot AR magazines. Between your service weapon, spare ammunition, a collapsible baton, a couple pair of cuffs, a less-lethal device, maybe a knife or a multi-tool and a flashlight, there simply isn’t any more room on our belts.

It’s even worse for a plainclothes officer. While you might carry less gear, the nature of the work and the need for a neat appearance and perhaps concealment, make it even less likely that you’ll be carrying any rifle ammo around daily. If the most important rule of a gunfight is to have a gun, then the second most important one is to have ammo for that gun. What’s needed is a way to grab ammo and go in a manner that is fast to put on, and easy to access.

There are a number of stock pouches and other methods of carrying a spare magazine right on the weapon. That’s certainly an option, but if you want more than one spare magazine you’re going to have to look at pouches. With some research, I’ve found a number of systems that are either directly designed or would work well for the average officer fortunate enough to have access to a patrol rifle. 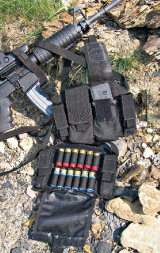 Eagle Industries’ Carriers
Eagle Industries has taken the notion of active shooters seriously and has introduced a whole line of products geared directly towards patrol officers. I asked to take a look at one item in the line and Eagle sent me their whole array.

First up is their Patrol Bandolier. This is a simple pouch with a shoulder strap that is quick to grab, easy to carry, and fast to don. Simply sling the pouch across your body like a satchel and you’re good to go. If you have the time or want to anchor it down further, there’s a waist strap that can be worn as well. They make two models, one for the shotgun and one for the M4. The shotgun model holds 12 rounds of 12 gauge ammunition in loops under a protective flap and two high-capacity pistol magazines.