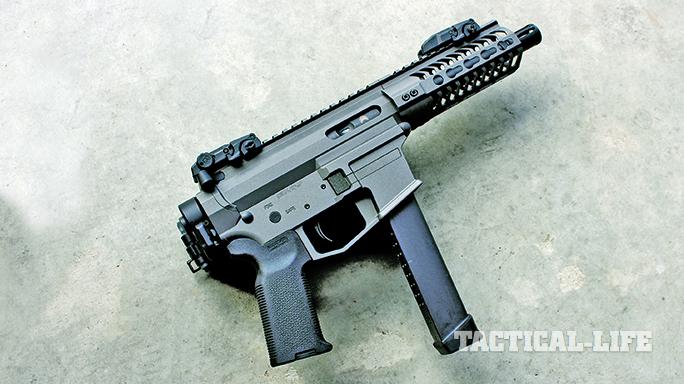 1 of 5
UDP-9 SBR
Personal defense just got a lot easier. Angstadt Arms’ UDP-9 runs like an AR, but it feeds from 9mm Glock magazines—the same ones your pistol probably uses. 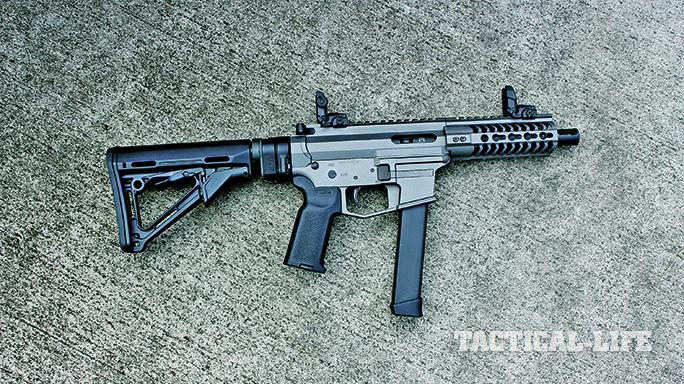 2 of 5
UDP-9 SBR 2
Unlike some 9mm ARs that use adapters or magazine well inserts, the UDP-9’s lower receiver is built specifically for using all generations of Glock magazines. 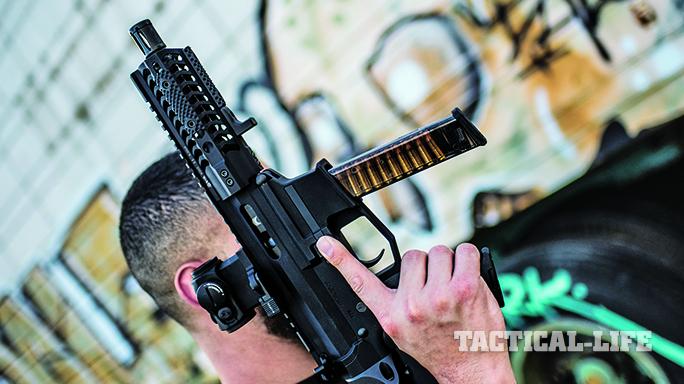 3 of 5
UDP-9 SBR
The aluminum Odin Works handguard features KeyMod slots on the sides and bottom for adding accessories, including hand stops and rail covers. 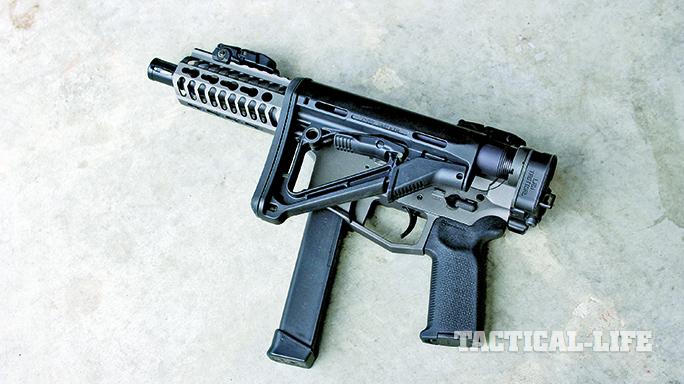 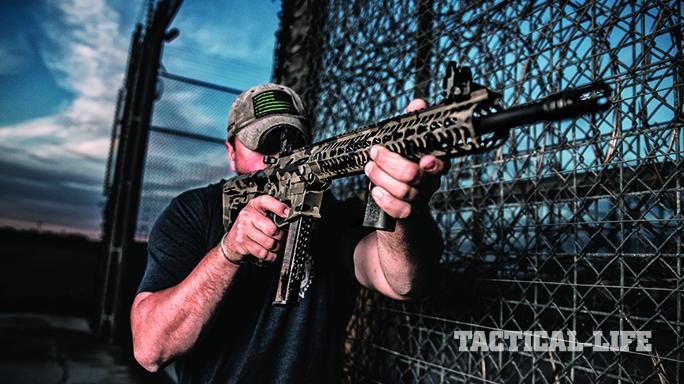 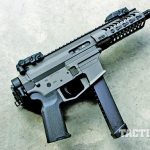 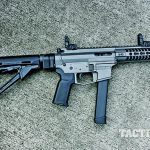 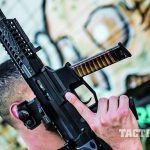 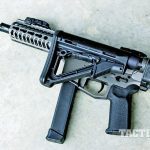 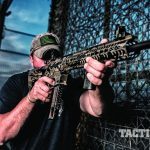 Angstadt Arms of Charlotte, North Carolina, is a newer company that specializes in making AR-15-style carbines, pistols and short-barreled rifles (SBRs) that use Glock magazines and dedicated receivers rather than a mil-spec design. Angstadt’s firearms are chambered in 9mm, .40 S&W or .357 SIG, and the company also makes select-fire units for police and military units. Angstadt also sells stripped receiver sets and caliber conversion kits, all of which use 100-percent American-made parts.

Though 9mm carbines that use Glock magazines are hardly novel, Angstadt Arms makes a complete rifle that has the same controls as the AR-15 and uses Glock magazines. (Several other companies use different charging handles, bolt catches and fire control switches that result in a gun only reminiscent of the AR-15.)

I learned of Angstadt Arms from a Wilmington, Delaware, CSI detective who wanted a reliable rifle that used the same magazines as his duty pistol. Obviously, having interchangeable pistol and rifle magazines makes tactical and logistical sense for both LE and civilians.

While lots of firearms are constantly being introduced to the market, they’re not always ready for primetime, and a few never make it to market in appreciable quantities or are distributed before adequate design testing. But that’s not the case with the UDP-9, which was developed over two years using 3D printers to produce over 50 prototype refinements of the upper and lower receivers before the final version was adopted.

The Angstadt UDP-9 runs via simple blowback operation, meaning the bolt is not locked into the receiver or barrel extension and moves rearward to cycle the action by the cartridge case moving rearward against the breech face. The upper and lower receivers are joined by two takedown pins like the AR-15, and the UDP-9 uses identical operating controls, including the charging handle, trigger, safety, magazine release and bolt release, but does not have a forward assist or ejection port dust cover. Interchangeable parts between the UPD-9 and the AR-15 include the trigger and hammer groups, charging handle, grip and buttstock.

The receivers on the UPD-9 are dedicated to using Glock magazines. The lower receiver has an integral magazine well that is flared to make it easier to insert magazines. More significantly, the mag well holds the magazine without using spacers or insert blocks commonly used to convert standard AR-15 lowers to fit the shorter magazines used for the 9mm. This eliminates added parts and keeps tolerances tight to ensure a consistent fit of the magazine.

Departing from the AR-15 design, the magazine release button is actually a lever that pivots to engage the magazine notch in the right side of the Glock magazine. (The UDP-9 can use all generations of Glock mags as well as Magpul’s new Glock mag.) The release button is located in the same place as the AR-15’s and is partially surrounded by a protective fence to keep it from accidentally being depressed. The button is also large, square-shaped and deeply checkered.

The UDP-9 has an AR-15-style bolt catch that holds the action open after the last round has been fired. The catch is activated by a connector bar inside the receiver that reaches forward to contact the follower of the Glock magazine. The UDP-9 can also use +P and steel-cased ammunition.

The upper and lower receivers are machined from a billet of 7075-T6 aluminum and fitted as a matched set, resulting in an extremely tight, wobble-free fit. (Matched sets are made by fitting the receivers together, then drilling the front and rear takedown pinholes.) My test rifle, the UDP-9 SBR, came with receivers finished in black satin Cerakote, but standard models use black hardcoat anodizing. The lower’s integral triggerguard is very thick and substantial, with enough room to accommodate a shooter’s finger while wearing a heavy glove and not exert pressure on the trigger. That matters for safety and trigger control.

My UDP-9 SBR came with a 6-inch barrel made from 4140 chrome-moly steel with a 1-in-10-inch twist rate. It’s lapped and features 1/2×36 threading as well as an A2-style birdcage flash suppressor. The aluminum handguard, made by Odin Works, has a full-length Picatinny top rail and KeyMod slots along the sides and bottom. An optional hand stop is mounted in the 6 o’clock position to keep the support hand front sliding in front of the muzzle, which is critical for SBRs with a barrel this short.

My UDP-9 SBR came equipped with optional Magpul MBUS sights as well as the standard MOE buttstock and grip. These designs are very good choices among the many options available for a close-quarters rifle. The adjustable MBUS sights flip up under spring tension at the touch of a button. The front sight has a protected post, and the rear has an adjustable aperture.

The MOE grip is long enough to provide much better finger placement on the trigger than the standard A2-style grip and also has a hinged compartment for stowing batteries or small tools. The four-position MOE stock has a quick-detach (QD) swivel mount and two slots to attach a sling, but its best feature is a lever that locks the stock in place, removing any marksmanship-degrading wobble that is endemic to collapsible stocks. The UDP-9 can also be ordered with the MVB Industries ARC stock.

Because I wanted the most compact SBR possible, I added an optional Law Tactical Folding Stock Adapter. The Law Tactical unit is a very sturdy, well-made device that mounts onto the lower receiver ring and allows the buttstock be folded to the left side. This is a huge benefit for stowing the rifle, reducing its overall length from 22 to only 15 inches, thus significantly expanding the rifle’s carry and transportation options. At only 15 inches long, this UDP-9 can be carried discreetly or stowed in a laptop case, though the rifle should not be fired with the stock folded, as the action will not cycle.

Weapons that fold to only 15 inches and can be deployed rapidly are natural candidates for protective details that would deploy a holster rig like the well-made DeSantis DSD rig, which is typically used for MP5s and other submachine guns. Unfortunately, the Law Tactical adapter folds leftward rather than rightward. A right-side folding stock would work better with the DeSantis DSD rig. However, the UDP-9 is offered with a collapsible stock that would work in this rig, though the weapon would be longer than 15 inches.

I tested the UDP-9 SBR’s accuracy at 50 yards using a Caldwell rest and a Leupold 3-9X scope. The UDP-9 preferred Atlanta Arms’ Elite 115-grain JHP ammo, which produced the best and average groups of 1.7 and 2.25 inches, respectively. These groups would be smaller and easier to obtain with a trigger pull weighing less than that of my test model, which weighed a little over 7 pounds according to my digital Lyman trigger pull gauge. Nonetheless, the UPD-9 has the same trigger as a standard AR-15, so aftermarket units will fit and are easy to install. This SBR’s reliability was perfect across six different loads, including those with hollow-point bullets.

The question always comes up: How much velocity is lost when barrel length is shortened from carbine to pistol lengths? The answer can only be found by measuring a shortened barrel’s velocities against a standard-length barrel under identical conditions. However, I found that Winchester’s 115-grain FMJs, at 1,355 fps, averaged 192-fps faster in a 16-inch AR-15 barrel than in the UDP-9 SBR’s 6-inch barrel.

The UDP-9 SBR handles very well and is exceptionally controllable, even during rapid fire. I had the opportunity to fire a fully automatic version, and it kept every single round on target with minimal muzzle rise. The 16-inch-barreled version of the UDP-9 is also quite adept in terms of handling.

The UDP-9 SBR is a serious contender for those who want a PDW in a readily available caliber that uses the same magazines as their sidearm. This weapon is well designed and manufactured with tightly fitted parts, and it comes with high-quality stock and grip options. In the SBR format with a side-folding stock, its design is perhaps the zenith of the currently available AR-style carbines that use Glock magazines.

This article was originally published in ‘Tactical Weapons’ February/March 2017. To subscribe, visit outdoorgroupstore.com 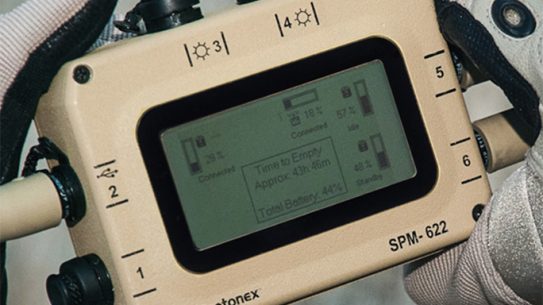 Massachusetts-based Protonex has come out with a new power kit designed to reduce weight...