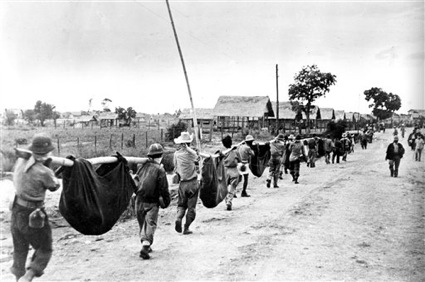 A photo released by the U.S. military in 1945, after it was captured from the Japanese, shows allied prisoners of war in the Philippines carrying their comrades in slings. At the time of its release, this photo was identified as dead and wounded being carried by fellow prisoners during the Bataan Death March in April 1942. The original caption on the military handout read: “This picture, captured from the Japanese, shows American prisoners using improvised litters to carry those of their comrades, who, from lack of food or water on the march from Bataan, fell along the road. Philippines, May 1942.” Subsequent information from military archivists, the National Archives and Records Administration, and surviving prisoners strongly suggests that this photo may actually depict a burial detail at Camp OÏDonnell, the Japanese POW camp where allied prisoners were held after the Bataan Death March. (AP Photo/U.S. Marine Corps)

For 68 years, John E. Love has been haunted by memories of being forced to carry the bodies of fallen comrades to a mass grave hollowed out of a Filipino rice field. Now, at last, a bit of history is being rewritten because of those memories.

After six months of research, The Associated Press this week is correcting the caption on one of the most famous photos in its library, 65 years after the image first moved on the newswire. The image shows defeated Allied soldiers after their surrender to Japanese forces on the Philippines’ Bataan Peninsula in April 1942.

Over the years, the photo — which shows a procession of men walking down a dirt road, bearing bodies in blankets hung from bamboo poles — has become perhaps the most widely published image of what came to be known as the Bataan Death March.

But for many of those years, Love, a native of Albuquerque, N.M., who fought to defend Bataan as a 19-year-old Army corporal, saw captions paired with the photo that he believed did a disservice to the truth.

Last August, Love picked up the Albuquerque Journal and saw the photo again, together with a front-page story about Bataan survivors. He called the newspaper and told an editor the caption was wrong. It described the scene as part of the infamous Death March, a forced six-day march by Japanese captors of 12,000 Americans and more than 66,000 Filipino prisoners across the peninsula. Thousands died in the march, suffering from lack of food, water and medical treatment.

“That picture is not of the Death March,” says Love, now 87. “The Japanese would not have tolerated a bunch of slow marching guys carrying their own dead. They wouldn’t have tolerated it just one New York minute.”

A Journal reporter, Charles D. Brunt, found other local Bataan survivors who agreed, wrote a story about the conflicting information and contacted AP, the source of both the photo and the caption. That launched the cooperative’s own investigation of the photo, originally supplied to news services by the U.S. military after it was confiscated from defeated Japanese forces.

Deep in the AP library of millions of photos, the caption filed with a negative in 1945 identified the image as showing U.S. and Filipino forces carrying war casualties as they neared the end of the death march and approached Camp O’Donnell, where prisoners of war were held.

AP archivists contacted the Pentagon. Eventually, that led to the original photograph, on file in the National Archives in Washington, D.C. The catalog recorded it as a photo of American prisoners using improvised litters to carry comrades. But a note filed along with the image, date unknown, said that, according to a retired U.S. Army colonel, the photo was not of the death march, but of the burial detail in the weeks that followed.

That’s exactly the way Love had long recalled it.

“We rounded up bamboo poles … and we confiscated what blankets we could from the incoming prisoners. We told them we had to have them. The guys were dying faster than we could dig graves or carry them,” Love said. “We carried them 1,000 yards and we would just unload the blankets there and the guys would fall out into the graves. I did that every day until the late hours of the evening for six weeks.”

After discussing the evidence, AP decided to correct the caption. It now reads, in part, “At the time of its release, this photo was identified as dead and wounded being carried by fellow prisoners during the Bataan Death March in April 1942 … Subsequent information from military archivists, the National Archives and Records Administration, and surviving prisoners, strongly suggests that this photo may actually depict a burial detail at Camp O’Donnell.”

It is rare for the news service to correct the information filed with a historical photo, said Valerie Komor, director of the AP Corporate Archives. There are many images in storage, and any individual photograph is likely to be re-examined only if someone calls it into question. But that does not mean the first draft of history cannot be rewritten.

“I’m glad we came to a resolution for these veterans who understandably take it very seriously, as well they should,” said Chuck Zoeller, a longtime director of the AP Photo Library who now works on the corporate communications staff. “I’m glad there’s some satisfaction for them in it.”

The new caption does not change history. It merely revises a footnote, 68 long years after the fact.

But on Wednesday, when Love recalled his experience at Bataan and his insistence that it be recorded correctly, his voice broke and his eyes welled with tears.

A photo released by the U.S. military in 1945, after it was captured from…