1
SHARES
22
VIEWS
Share on FacebookShare on Twitter
The Tactical Competition .308 from APA Tactical is fully capable of performing as either a sharpshooter or competition rifle. It is equipped with a Nightforce 5.5-22x50mm optic mounted with Badger scope rings and a Harris bipod.

IT’S been about 5 years since Pete Pi, Jr. of CorBon fame introduced me to Jered Joplin and his crew of rifle craftsmen. Though Jered’s company went through some name changes during its growth period, he has settled on American Precision Arms.

American Precision Arms operates their custom rifle shop out of Jefferson, Georgia. Without much fanfare, APA has been putting out some fantastically well-built and accurate rifles — both bolt-action and autoloaders.

Since 2005, I’ve had the opportunity to work with several of their creations, having not only cut tight groups on paper but taken game in the field as well. The subject of this review began with a conversation in January 2010.

This conversation started with my first look at APA’s new floorplate/triggerguard assembly. Many bolt-action rifles with box magazines use a large paddle for a magazine latch. Jered had received several requests from the field for a different type of latch. The guys at APA went to work and developed what they are calling their Redefined Trigger Guard, or RTG. 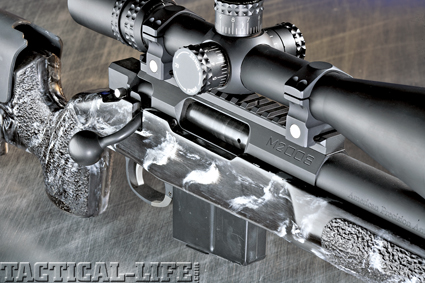 The soul of the rifle is a Broughton #6 contour barrel, measuring 26” long with a 1-in-12” twist rifling. Its heart is made up of the Badger bolt action, the APA Redesigned TriggerGuard and a crisp Jewell trigger.

The RTG is sized for the Remington 700 short action or any rifle that uses the same footprint. Constructed of 7075 aircraft
grade aluminum the RTG is both lightweight and extremely strong. What makes the RTG most unique is the magazine latch. This component is blended in with the triggerguard itself and does not protrude. You can release the magazine with your trigger finger, either right- or left-handed.

The men that build guns at American Precision Arms are not simply engineers and gunsmiths; they are shooters who actually go out to hunt and compete with the guns they build. In a nutshell, these folks know what it takes to bring home game and win on the range.
American Precision Arms prides itself on being a true custom rifle shop. When they say “custom,” that doesn’t mean they build “custom rifle” A, B, or C from which you take your pick. APA custom builds rifles to suit the customer’s individual needs — be they long-range hunting, sanctioned competition, law enforcement or military sharpshooting.