2
SHARES
55
VIEWS
Share on FacebookShare on Twitter
The ARX160 offers a 21st century battle rifle that is compact yet can switch barrels and calibers easily in moments.

Beretta’s AR70 assault rifle and its successor, the AR70/90, are among the least known modern military rifles among U.S. shooters. This can be attributed to various factors: the only major country to use the rifle is Italy; in general, Italian soldiers don’t turn up very often in newscasts from the battlefield, though a reasonable number have served in Afghanistan; and only a small number of civilian-legal semi-auto AR70s were ever imported into the U.S. Despite their lack of recognition, the AR70 and AR70/90 are good rifles that have served Italian armed forces for many years. As the AR70/90 will soon be replaced by the Beretta ARX160, it seems like a good time to have a look at its pros and cons.

Beretta began development on what would become the AR70 in 1968. At the time, the Italian armed forces were equipped with the Beretta BM59, a very good 7.62x51mm NATO battle rifle based on the M1 Garand but with select-fire capabilities and a detachable box magazine. However, as the NATO standard became the 5.56x45mm, a new rifle in that caliber was needed for Italian forces. In addition to the basic rifle, a version with a folding stock was developed, as was a version with a shorter barrel and folding stock for airborne and special forces use. 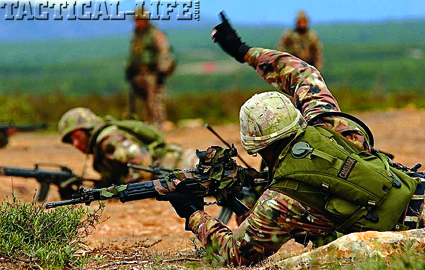 Italian troops armed with the AR70/90. The soldier in the foreground has a Trijicon ACOG mounted on his rifle.

Trials of the AR70 and limited issuance to Italian troops showed some small flaws that required fixing prior to the rifle being adopted for general issuance. These changes were incorporated in 1985, and the new rifle was adopted in 1990 and designated the AR70/90. At first glance, the AR70/90 looks similar to the M16, though upon closer examination some differences can be noted. Among the most obvious similarities are the carry handle and hinged upper, which can be opened and rotated downward. The original AR70’s upper receiver had a square cross-section and used stamped bolt guides. However, this design was not deemed sturdy enough for military service; hence, the AR70/90 incorporates a trapezoidal upper receiver and separate bolt guides welded in place for greater durability. 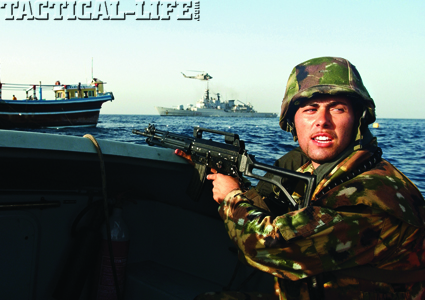 An Italian San Marco Marine on ship interdiction duty armed with an AR70/90.