0
SHARES
29
VIEWS
Share on FacebookShare on Twitter
Originally retired from military service in the early 1960s, the M14 has found a new mission in Iraq and Afghanistan. Outfitted with the new Archangel M1A stock, this 7.62mm beast is accurate and can easily serve as a Designated Marksman.

Repurposing is the politically correct term for recycling these days. When I was a kid, recycling meant cutting the bottom half off of a milk carton and using it to hold nails in the workshop. Nowadays, we seem to recycle everything that doesn’t scamper off when we reach for it. In these times of economic uncertainties and tight law enforcement budgets, this can apply to tactical firearms as well.

The M14 was the right rifle at the wrong time. The original design parameters issued in the 1950s mandated a lightweight infantry weapon to replace the M1 Garand, the M1 Carbine, the BAR, and all issued sniper rifles, as well as the M1 Thompson and M3-series submachine guns. Over the course of its government production cycle, four different companies produced roughly 1.5 million copies of the rifle. The last military M14 rolled off the production line in 1964. 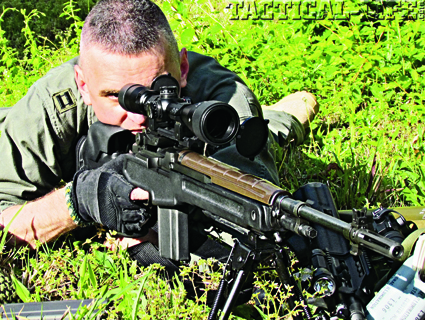 Practical utility eventually exposed the M14 rifle for what it was—a bit too heavy to be an assault rifle and a bit too light to be a support weapon—and the M16 replaced it in military service in fairly short order. However, in certain operational areas where engagement distances might exceed the innate capabilities that the laws of physics dictate might be wrung from the 5.56mm cartridge, tactical operators these days are clamoring for something with a little more reach. So, some smart person in uniform dragged an M14 out of storage, wiped off the dust, and tossed it back into the fray. Finally, almost 50 years after the last rifle was built, we found the fight this gun was born to win.