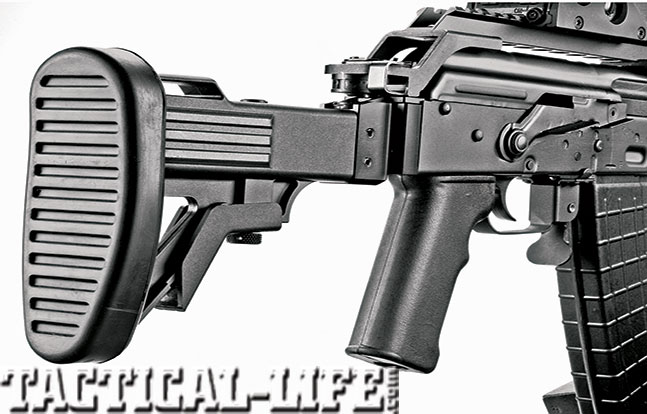 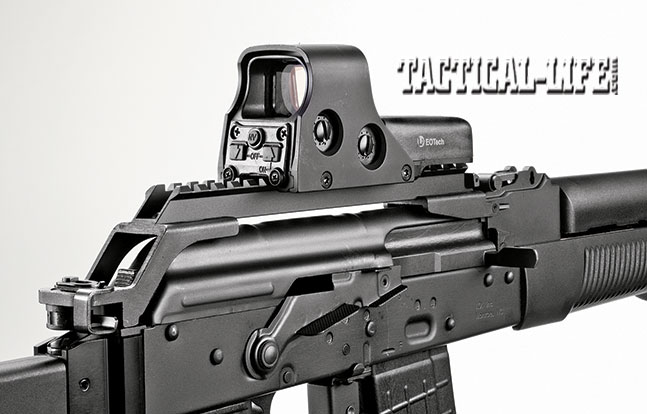 2 of 9
archer-3
The steel optical rail features a sighting channel to allow the use of the iron sights as well. 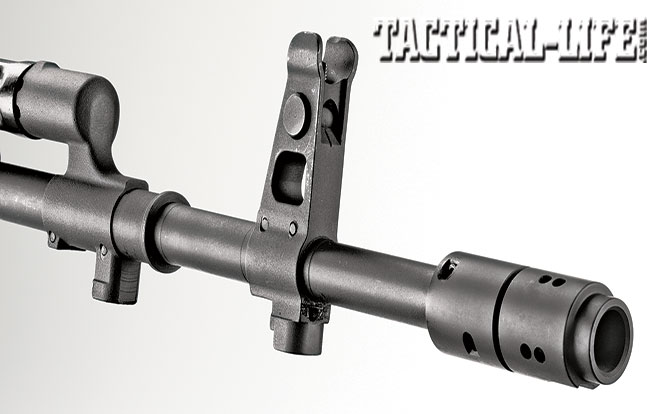 3 of 9
archer-4
The front sight base of the Archer features a sturdy adjustable post protected by heavy-duty dual wings. 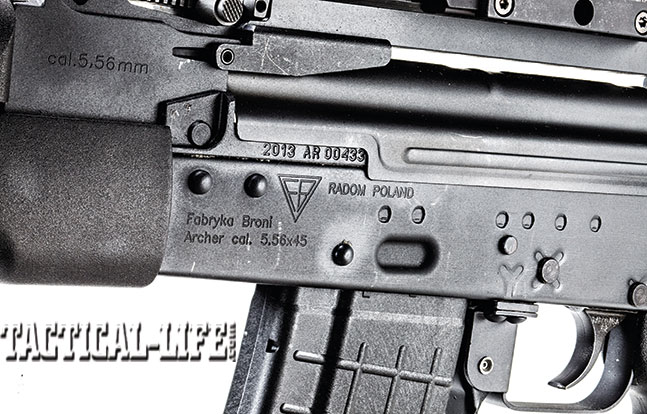 4 of 9
archer-5
Note the classic Fabryka Broni logo, a stylized “FB” in an inverted triangle, on the receiver. 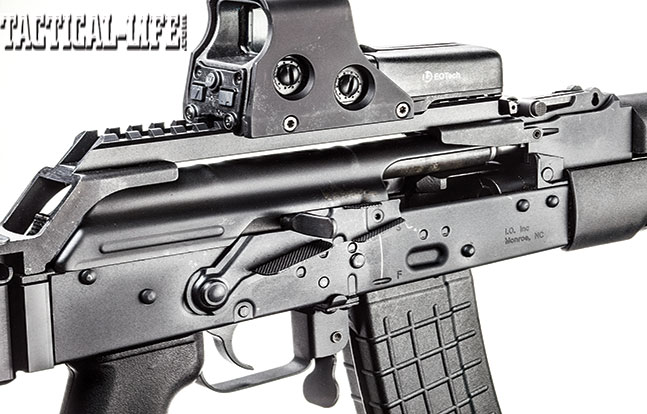 5 of 9
archer-6
The Archer’s safety lever features a raised tab on its lower edge to allow disengagement of it by the trigger finger. Note how the cutout in the top portion of the safety can be used to lock open the action 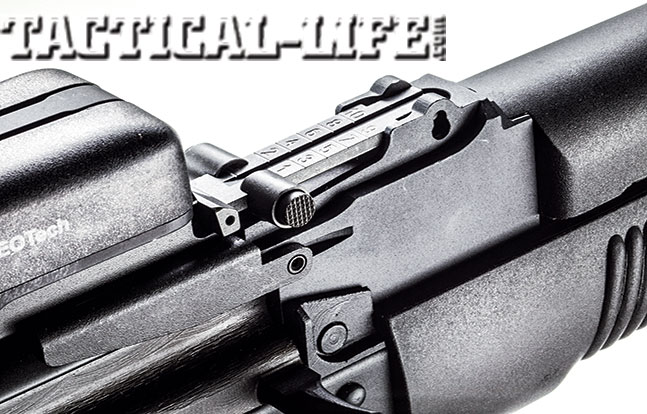 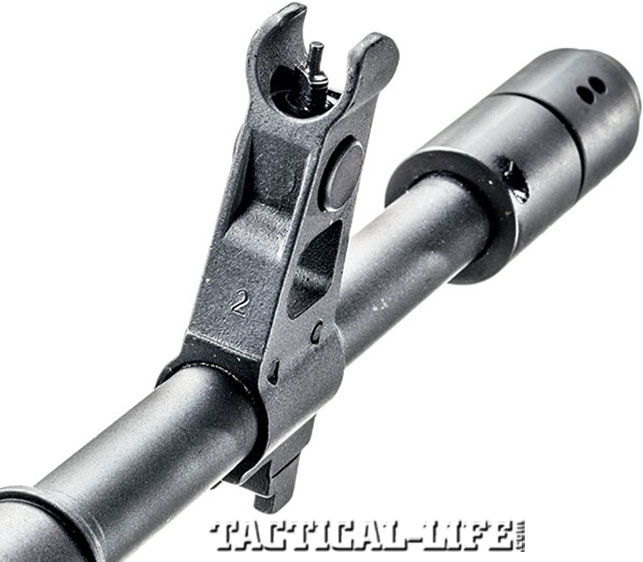 7 of 9
archer-9WTRM
Mating up with the post front sight is a leaf-style sliding tangent rear. Note how the forward portion of the optic rail engages a channel in the rear sight block. 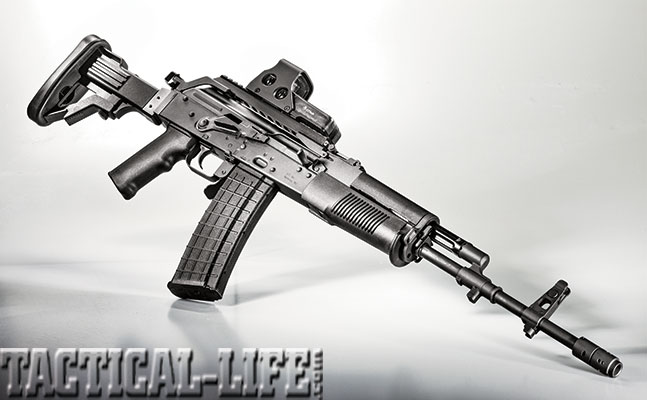 8 of 9
archer-lead
The I.O. Inc Archer is a semi-automatic version of the Polish Beryl rifle (below, left) that has served in Afghanistan and Iraq. Shown above equipped with an EOTech 552 HWS unit. 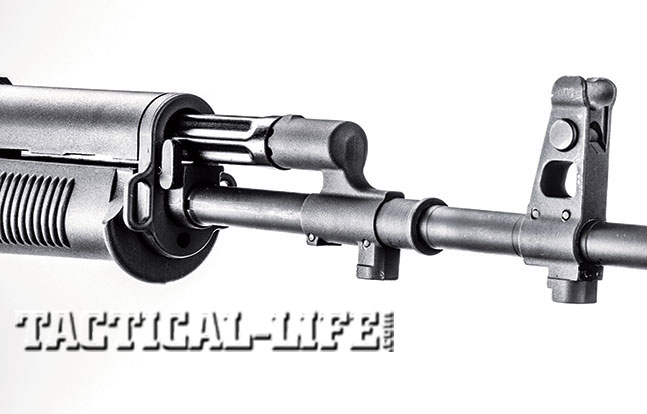 9 of 9
archer-8wtrmk
The gas block assembly of the Archer is similar to that of the wz.88 Tantal, boasting a 90-degree angle to reduce bullet shearing as well as a ring for accepting a clip-on bipod. 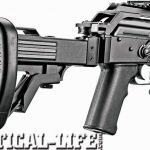 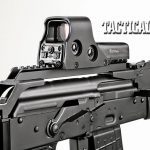 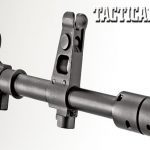 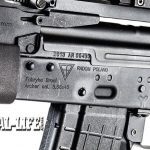 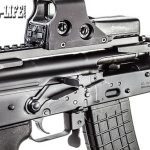 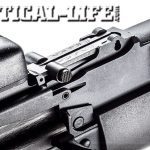 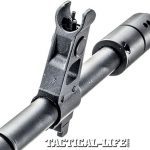 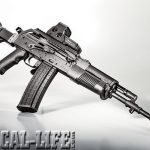 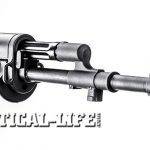 Nature abhors a vacuum. As Nazi Germany’s wartime military encroachments receded at the cessation of hostilities in the European theater of World War II, the “new normal” of the Cold War era began establishing itself almost immediately. As the western half of Europe settled under the sphere of influence of the United States, the eastern half fell under that of the Soviet Union. Painfully aware of its exposure on these flanks, the Soviet Union quickly set about ensuring that governments friendly to Soviet interests inhabited these “satellite” states.

This effort was embodied by the development of the Warsaw Pact in the 1950s, an agreement created in response to the establishment of NATO by the West. At its heart, this alliance was designed to ensure a buffer zone between Mother Russia and the perceived threat of Western Europe. As a result, these Eastern European nations fell under the influence of the Soviets, resulting in far-reaching effects to their societies.

For students of small-arms development, one very specific result this had was the standardization of the 7.62x39mm cartridge and

Kalashnikov-pattern rifles throughout the region. In the early decades of the Cold War, with few exceptions, most of the Warsaw Pact nations fielded rifles that were closely patterned after their Russian progenitor. However, as the decades of the Cold War ground on and the ties between Moscow and some members of the Warsaw Pact began to show signs of weakness, this began to change.

What is important to remember is that many of these Eastern European nations possessed established, independent and revered arms-making communities. And, when it comes to a discussion of revered arms-makers in this part of the world, conversations inevitably turn to Fabryka Broni—known to many of us here in the West simply as “Radom,” for the city in which it is based.

As was the case with several Warsaw Pact members, Poland’s earliest Kalashnikov-pattern rifles shared many common traits with the original Russian design. This was true of the early milled-receiver models up to the AKM- and AKMS-era rifles. However, things began to change in the waning years of the Cold War with the shift to the AK-74 and the 5.45x39mm cartridge.

In the interests of replacing the country’s aging collection of AK-pattern weapons, the Poles decided in the late 1970s to develop their own homegrown variant of the Kalashnikov rifle. The Polish AK variant would chamber the advanced 5.45x39mm cartridge and would not follow the “traditional” AK-74 pattern. The eventual result was the wz.88 “Tantal,” a radically unique weapon that represented cutting-edge Polish design—as well as that nation’s growing independent streak regarding the directives of Moscow.

It is important to consider this in the context of the state of the Cold War at this time. Poland was beginning to notably chafe under the yoke of the Soviets, a situation embodied by the birth of the Solidarity movement and its eventual electoral success in the late 1980s. The result was the first non-Communist-aligned government in one of the Soviet Union’s cherished satellite states. And, unlike with the Hungarian Uprising of 1956, in this case the Soviets were not interested in imposing their will through military force. It was in this context of the Soviet Union’s crumbling hold on its satellite states that Poland began to inexorably move toward the West culturally, economically and militarily.

It was in this era that the 5.45x39mm Tantal rifle was born, and, due to the circumstances surrounding this time, it ultimately did not have a long life ahead of it. With Poland moving away from Soviet influence (and the soon-to-follow collapse of the Soviet Union itself), the new rifle and its new chambering became a bit of a liability. As it became clear that Poland would be offered the opportunity of joining NATO, the need for a 5.45x39mm-chambered rifle waned quickly (the nation’s 7.62x39mm weapons fared better as reserves due to the large supply of ammunition on hand), with it soon being eclipsed by the goal of adopting the NATO standard 5.56x45mm round.

As a result of the move to join NATO in the late 1990s, Poland pushed into high gear on adopting a new 5.56x45mm-chambered weapon system. In fact, the nation had made earlier attempts to adapt the Tantal system to the 5.56mm cartridge with some success. This work became the basis for what would become the Mod. 96 rifle, also known as the “Beryl.” This weapon, adopted by the Polish military in 1997, represented a very interesting system that combined the Soviet Kalashnikov system with modern features and the Western 5.56x45mm cartridge.

Operationally, the Beryl featured the tried-and-true Kalashnikov long-stroke piston system of operation. Where it differed significantly was in its fire control modes. As was the case with the Tantal, the Beryl could fire in semi-auto, full-auto or three-shot burst modes. The familiar dustcover/safety lever system of the AK on the Beryl functioned to place the rifle in “fire” or “safe” modes. The rate of fire was selected by a lever located on the left side of the receiver, with three positions for the three modes of fire.

Rather than the multi-colored handguards and pistol grips of the Tantal, the new Beryl employed modern black synthetics. The Beryl’s side-folding buttstock was designed with a more traditional profile for greater user comfort with regard to cheek- weld, with a collapsible buttstock assembly developed later. The Beryl’s gas block was similar in design to that of the Tantal, with a 90-degree angle and a forward ring for accepting a clip-on bipod.

With Poland’s close ties to the West, it would seem appropriate that U.S. consumers might have a chance to own their own version of this impressive rifle. And, thanks to the efforts of I.O. Inc., we do. The company’s Archer rifle is a civilian-legal, semi-automatic rendition of the classic Beryl rifle imported and adapted for sale here in the United States.

The rifle is imported in a single-stack magazine configuration by I.O. Inc. and then modified with the requisite amount of U.S.-made parts to allow it to legally accept double-column magazines. As offered, the Archer is configured similarly to the latest versions of the Beryl rifle, with a collapsible synthetic stock and a rock-solid optical rail mount located above the rifle’s top cover. The Archer comes standard with a U.S.-made polymer magazine from ProMag, a component that’s required to be used with the rifle as part of its 922r compliance.

I recently received a test sample of the Archer for review. Close inspection revealed a well-made rifle, with the classic Fabryka Broni “FB” inverted triangle logo on the left side of the receiver. In addition to the ProMag polymer magazine, the Archer also sports a TAPCO fire control group as well as what appears to be the same polymer pistol grip as I.O. Inc.’s Hellhound rifle. The four-position, collapsible polymer stock is easy to adjust and features a generous rubber recoil pad.

The ergonomics of the rifle are quite good. The magazine-release paddle features an oversized tab for easier manipulation, and the safety lever is also equally enhanced. To allow for easier manipulation, it features a large tab in the middle of the lever. Interestingly, it also features a cutout for capturing the bolt carrier’s charging handle so the action can be locked open. The optic mount is also quite impressive. Featuring two solid mounting points—interfacing with the rear sight block and the rear stock trunnion of the receiver—the mount is made of steel and features a sighting channel for the use of the iron sights in tandem with an optic.

I took the rifle and five ProMag magazines out with a selection of .223 ammunition from Black Hills, Hornady and Winchester. As the Archer sports a 1-in-9-inch rate of twist, I kept bullet weight selections at 55 grains and below. I fitted the Archer out with an EOTech 552 HWS and started out by running the gun for function with the magazines fully loaded (30 rounds each). I experienced some double feed malfunctions but was able to isolate it to a single magazine. Once I removed it from the batch, the rifle ran without a hitch. For accuracy, I set up a target at 100 yards and equipped the rifle with a 3-9x Leupold scope. The rifle showed a slight preference for the Hornady load, but it did well across the board, averaging around 2 inches (with the tightest group being 1.75 inches).

For those looking for an opportunity to own a semi-automatic, civilian-legal version of the classic Polish Beryl military rifle, the I.O. Inc. Archer offers a great opportunity. Providing American shooters with a uniquely “Westernized” Kalashnikov, the Archer would make for a good addition to any AK enthusiast’s collection. 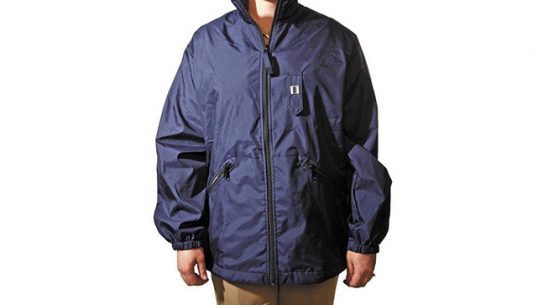 Uniform Updates on the Horizon For the US Navy

The US Navy is exploring uniform updates, such as lightweight NWUs and a new...