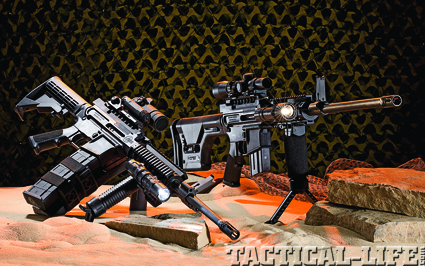 The ARES AAR (above) offers users a handy and compact CQB carbine in 5.56mm. The ARES DMR (above, right) takes the same basic platform and modifies it to fulfill a role as a high-volume sniper rifle also in 5.56mm.

Called the SHRIKE 5.56, the weapon is manufactured by ARES Defense Systems and is a radical departure from all previous designs. Rather, it is manufactured as a complete, dedicated weapon or as an upper receiver conversion assembly, which is compatible with any standard M16 or M4 lower receiver.

Operated by a short-stroke gas piston, the ARES SHRIKE 5.56 uses an impinging piston in an adjustable gas cylinder mounted on the left side of a quick-change barrel. Mounting the in-line piston/operating rod on the side was done for the same reason as in the Stoner and allows the weapon to use an improved top-mounted version of the original quick-change barrel system found in the famous Stoner 63/63A Weapon System. However, in the ARES, with the side-mounted gas system, totally modularity is achieved without having to rotate the receiver upside down.
Besides being one of the fastest barrel-change systems, this one uses a spring-loaded vertical tapered pin that enters through the top of the barrel extension to center and anchor the barrel in position, but that’s not all. If there were a catastrophic case failure, gas escaping into the barrel extension would take the easy way out, forcing the spring-loaded barrel retaining upward to vent gasses up ahead of the receiver. 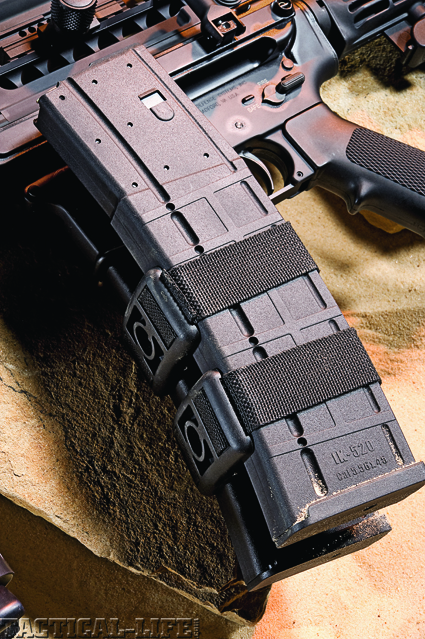 The IK-520 40-shot polymer magazine tested with the AAR features steel reinforcement ribs molded directly into the lips of the magazine’s body.

The ARES SHRIKE 5.56 normally fires from a closed multi-lugged bolt, but can also be had with an open-bolt module that simply replaces the standard closed-bolt components. Several lengths and weights of barrels are available, along with a rigid MIL-STD-1913 rail handguard the front of which houses a precise fitting bulkhead to support the front of the quick-change barrel similar to the barrel extension of the .50 caliber M2HB machine-gun. The front sight is mounted on top of the gas block. 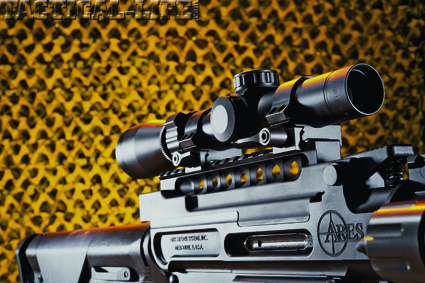 Both ARES feature a raised MIL-STD-1913 Picatinny rail on their upper receivers.

On the left side of the ARES upper receiver is the non-reciprocating charging handle, which can be folded when not in use. Because of the placement of this, the top portion of the bolt release is removed, the only modification necessary to the M16’s lower receiver group. This necessitates pulling the charging handle to the rear and releasing it to allow the bolt group to go forward. This is not only a better way to charge the M16, but the modification also eliminates the danger of the bolt release being bumped to unintentionally release a “locked-back” bolt group. 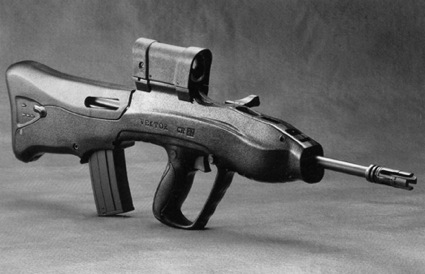 In the ’90s the VEKTOR division of Denel began development of an indigenous South...