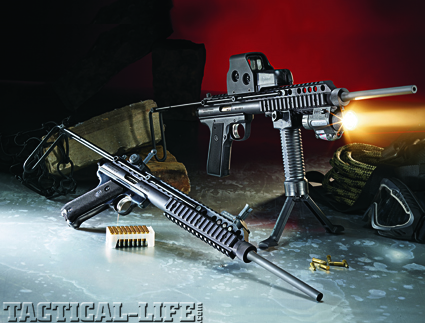 In 1949, my grandmother, a true outdoor gal, bought one of the first Ruger’s .22 LR caliber Standard Model pistols. I got my first one in 1954 and, if I had a nickel for every round I put through it, I’d have a small stimulus package. In 1993, I upgraded to a stainless heavy barrel target Ruger pistol, and I honestly don’t ever recall having a malfunction with any of these guns, other than a few misfires from old ammo I scrounged as a kid.

Inspired by, of all things, the World War II Japanese Nambu pistol, the Ruger Standard Model retains only the general silhouette of that gun along with the simple tubular upper receiver and bolt that operates by straight blowback in the Ruger. Bill Ruger got his first pistol right and in all of its forms, the best all around such gun ever made. It was only a matter of time until someone would design a .22 LR carbine conversion for the Ruger .22 pistol to provide a lightweight, accurate alternative using the pistol’s lower grip frame.

Such a conversion would be extremely handy for backpackers, boaters, pilots and anyone wanting such a firearm to take small game, plinking fun or even for personal protection in a pinch. If you tend to scoff at this last use, you don’t have experience with the .22 LR cartridge in this role. That’s okay, I do and trust me, the .22 LR has held its own very well in many instances I’ve seen as a police officer, and that brings up another viable role for such a carbine conversion of the Ruger. Well, wait no longer for such a conversion is here, and it comes from ARES Defense Systems.

For law enforcement, the ARES Defense conversion should be able to handle animal control, both as a nuisance and guard dogs protecting the locations of dangerous suspects, as well as taking out lights and security cameras before a raid on a dangerous location. Every cop I’ve shown the ARES RCU-22 to and let fire it has immediately seen the need for one on their department, especially after they shot it.

Realizing not only how good, but also how prolific the Ruger Standard Model family of pistols is, Mr. Geoffrey Herring, President of ARES Defense Weapons Systems, sought to create the best carbine conversion platform possible for it. Called simply the RCU (Ruger Conversion Unit), the conversion may well become the favorite such conversion for what is arguably America’s favorite .22 self-loading pistol.

Offered in two variations, the RCU can be had in a standard version with a polymer forend, and a Tactical model that is the subject of our tests. Showing some influence of the ARES Shrike and AAR rifles, this version comes with a miniature Mil-Std-1913 quad-rail handguard system made of the same aircraft alloy as the receiver that replaces that of the pistol, and this entire component is Mil-Spec hardcoat anodized in matte black. A round, knurled nut is hand tightened to retain the 16.25-inch barrel in the upper receiver, and a hardened steel rod stock extends for an overall length of 30.25 inches and retracts to an overall length of 26.25 inches. For law enforcement use the stock can be had to fully retract for maximum space saving, but as such is subject to Federal registration.

Yes, it was pretty much love at first shot in no small part to the Magpul M-BUS polymer auxiliary sights (in this case, black), the Aimpoint Comp M4 Red Dot Sight and a Grip Pod. Equipped with a Grip Pod Dual Light Rail, this used a SureFire G2 light mounted in a VLTOR G-Series Ring Mount on the right side and a Laser Devices Las-Tac Laser in a VLTOR Offset Scout Mount on the left side. Even with all of this equipment, the ARES RCU weighed less than 5 pounds, and its rails will accept innumerable other accessories, but the system’s weight is subject to another variable. 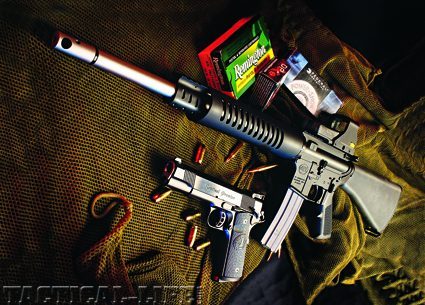 In 1949, my grandmother, a true outdoor gal, bought one of the first Ruger’s…