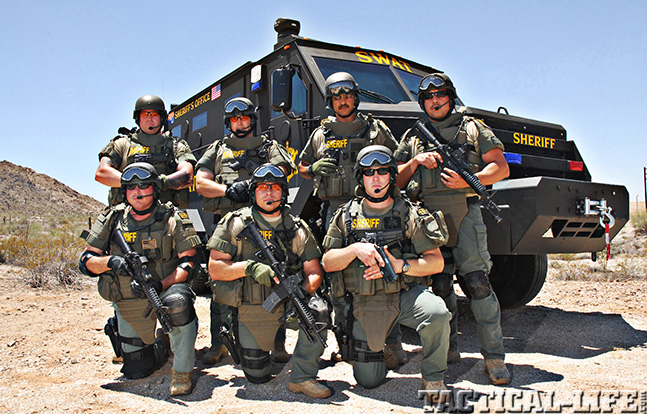 The Maricopa County Sheriff’s Office, or MCSO, provides a variety of law enforcement services in a jurisdiction that encompasses 9,200 square miles of territory and some 3.9 million residents. In 2012, the MCSO responded to approximately 90,000 service calls, conducted numerous investigations and executed 150 tactical SWAT operations. Maricopa County, Arizona, is the fourth largest county in the country and has become nationally recognized in recent years because the MCSO is commanded by Sheriff Joe Arpaio, who’s known as the “toughest sheriff in America.”

Policing Maricopa County involves operating in urban, suburban, rural and remote wilderness areas located in south-central Arizona. In the winter months, the temperatures can get below freezing, while temperatures in the summer months generally exceed 100 to 118 degrees. Law enforcement officers who serve in Maricopa County also have to cope with huge dust storms. These storms fill the air with enough blowing sand to darken the sky, close down airports, stop traffic, cause accidents and induce respiratory ailments.

As the population of Arizona has increased, numerous cities, towns and unincorporated communities have grown in size. This sort of growth brings more traffic, more accidents and more crime. Being a border state has also placed additional burdens on law enforcement agencies in Arizona. This includes having to deal with increased drug trafficking activity, money laundering, a serious gang problem and the problems associated with illegal immigration, including the kidnapping of illegal aliens for ransom.

The backbone of the MCSO is the Patrol Bureau. In 2013, MCSO sworn personnel responded to and investigated 926 aggravated assaults, 1,103 violent crimes, 1,231 burglaries, 79 rapes and attempted rapes, 78 robberies, 58 acts of arson, 525 vehicle thefts, 3,471 thefts, 5,285 property crimes and 20 murders and non-negligible manslaughter. What is truly amazing about these statistics is that some 800 sworn/commissioned MCSO deputy sheriffs, detectives and supervisors handled this intense level of activity.

The busiest station in the MCSO is District One. The District One station is staffed by one captain, one lieutenant, six sergeants, 50 patrol deputies and six detectives. District One covers 1,053 square miles of territory that includes rural areas as well as more densely populated communities. In the winter months, the communities that are protected by District One increase in population with the influx of seasonal residents. This district also borders several Native American reservations and the Salt River Recreational Area.

“Ever since the days of the Old West, the residents of Arizona have always relied on their sheriff to protect life and property and enforce the law of the land.”

District Two is located in the southwestern part of Maricopa County. The supervisors, uniformed deputies and detectives assigned to District Two cover eight different unincorporated communities and three contract cities in an area that is approximately 5,500 square miles in size. On average, MCSO personnel assigned to District Two respond to 40,000 service calls as well as some 35,000 cases that are initiated in the field. During one domestic violence incident that resulted in a pursuit of an armed subject, a District Two MCSO sergeant was forced to engage an armed gunman with his patrol rifle. This particular sergeant reportedly fired one round from a distance of approximately 25 yards and struck the armed gunman in the head as he started pointing his handgun at nearby law enforcement officers.

District Three is based in Surprise, Arizona, and covers some nine different communities, five unincorporated areas and two county parks. In order to patrol the 1,600 square miles that make up District Three, the MCSO has established a number of smaller patrol beats that are 12 to 160 miles in size. District Three is staffed by approximately 50 commissioned MCSO deputy sheriffs, detectives and supervisors.

District Four provides police services to unincorporated areas and contract communities in the northern and northeastern parts of the Maricopa County. The main office for District Four is based in Cave Creek and is staffed by one captain and some 50 deputies. This district encompasses 1,000 square miles and includes large numbers of new homes and businesses. One particular incident that proves how dangerous it can be to serve as a law enforcement officer on patrol occurred in District Four on January 8, 2012, when MCSO Deputy Sheriff William Coleman was killed in the line of duty while responding to a burglary in progress in Anthem, Arizona. During this incident, MCSO Deputy Coleman was shot and killed by an armed gunman when he approached a suspicious vehicle. MCSO Deputy Chris Contino, Deputy Kevin Woods and Reserve Deputy Shaun Osborne would later be decorated with the Silver Star for Bravery for their heroic actions during the shootout that took the life of Deputy Coleman. The gunman involved in this incident was killed in an exchange of gunfire with MCSO deputies.

The Lake Patrol Division is staffed by highly trained deputy sheriffs who are para- medics and EMTs and are well equipped to provide specialized public safety ser- vices in 1,000 square miles of recreational and wilderness areas. The Trails Division is based at Lake Pleasant Regional Park and is staffed by one MCSO Commander, one lieutenant, three sergeants, 10 deputies and one civilian employee; they work alongside the Maricopa County Parks Department. The Trails Division covers 120,000 acres that are usually visited by over 1.8 million people.

The Enforcement Support Division is responsible for managing the training center, the training for Sheriff Arpaio’s “civilian posse,” the Reserve Deputy Program, the Community Relations Unit, the Mobile Command Center and the Search and Rescue Unit. The Mobile Command Center vehicle is a fully equipped truck and tractor-trailer that is used during serious emergencies or disasters. The MCSO also operates various specialized units including a highly trained and very well equipped SWAT team.

Sheriff Arpaio was highly criticized in 1993 when he built a tent city jail in lieu of constructing a regular concrete jail facility that would have all the comforts of home. Establishing a tent city jail system in Maricopa County has earned Sheriff Joe international acclaim, including by the majority of his constituents, because the sheriff has saved the taxpayers some $70 million dollars by not constructing a tradi- tional prison. To save even more money, inmates in the Maricopa County Jail are only fed twice a day and are prohibited from smoking cigarettes or consuming coffee, sugar or salt.

Ever since the days of the Old West, the Arizona’s residents have relied on their sheriff to protect life and property and enforce the law of the land. The fact that Sheriff Arpaio has been elected to serve in office for five consecutive terms is a clear indication that the residents of Maricopa County are very happy with the job performance of their sheriff and his personnel. 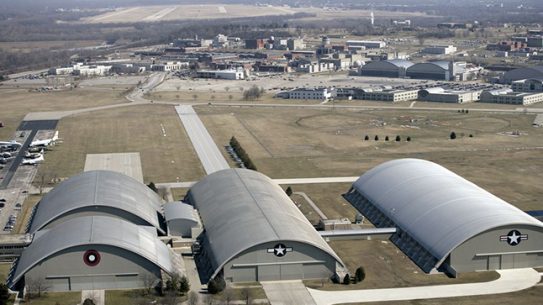 National Air and Space Intelligence Center to receive $29.5 million in funding for a...