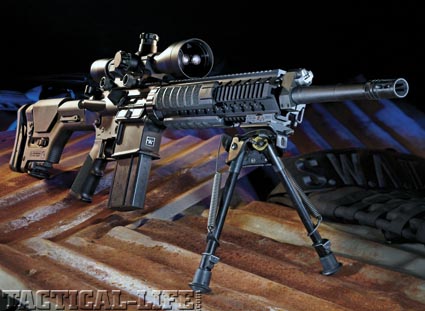 ArmaLite’s AR-10 SuperSASS is loaded with features that make it an outstanding long-range performer for law enforcement. Shown with a Leupold Mark 4 scope.

Some readers out there might not realize that ArmaLite has been in the small arms business since October 1954. In fact, their first product was the AR-5, a survival rifle chambered in .22 Hornet and produced for the U.S. Air Force. The infant company had few employees when they hired Eugene Stoner as chief design engineer. At the time, the U.S. military was testing a replacement for the M1 Garand, which chambered the .30-06 cartridge dating from 1906. A new .30 Light Rifle cartridge, based on the shorter .300 Savage case, was developed and that soon evolved into what became known as the 7.62x51mm NATO round. Prototype semi-automatic rifles were produced and eventually became the M14 battle rifle in 1957.

Delivery to the armed services began in 1959 and the M14 served during the early years of the Vietnam conflict. It was also produced in a select-fire, full-auto version. While a fine rifle, the M14 and its cartridge did not adequately fill the role of submachine gun, battle rifle and squad automatic weapon. ArmaLite’s Eugene Stoner designed and built prototypes of what was to become the AR-10 for military trials and they were tested by Springfield Armory in 1957, but were not approved. Eventually, the radical steel, alloy and plastic weapon design was produced in Holland and saw use in Europe, Africa, Asia, and Central America. After some time, the AR-10 was chambered for what we know as the 5.56mm NATO, becoming the AR-15—but that’s another story. 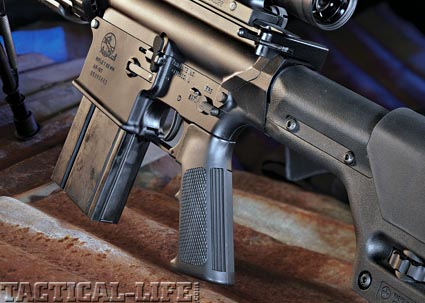 Controls like the safety and bolt catch are in familiar AR locations. Ten and 20-round box magazines are supplied with each rifle.

Today’s ArmaLite came into being in 1996 and produces a number of rifles and carbines based on the AR-10 and AR-15, plus they make an AR-30 bolt gun and a larger version called the AR-50A1, which shoots the powerful .50 BMG round. I attended the International Association of Chiefs of Police (IACP) Convention last year in Chicago and while touring the exhibit area stopped by the ArmaLite booth and looked over their products. One that caught my eye was the AR-10 SuperSASS. Introduced in early 2006, the rifle’s design stemmed from the 2004 U.S. military requirement for a semi-automatic sniper system (hence “SASS”) that had an adjustable gas system that could accommodate suppressed and unsuppressed fire. Interestingly, the rifle is currently seeing law enforcement use with the Military Police of Rio de Janeiro. 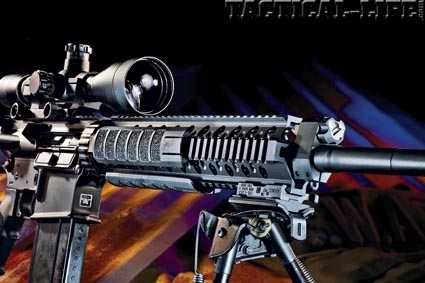 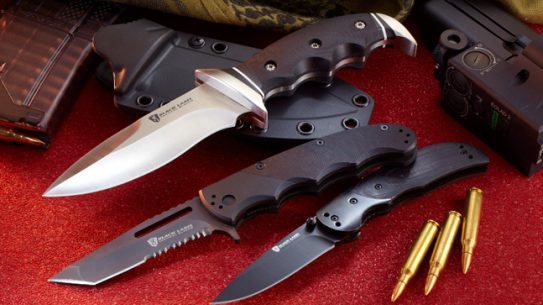 For tactical knives, Black Label Series has solid experience and expertise behind it, and...