63
SHARES
1.4k
VIEWS
Share on FacebookShare on Twitter
Accuracy with the Armalite AR-180 was more than acceptable, with the open sights producing 1- to 2-inch groups at 50 yards with the ammunition tested.

Latley, “improving” the AR platform by developing piston-driven ARs in lieu of Stoner’s original gas impingement design seems to be taking over the AR rifle scene. So why the rush to modify the 50-year-old direct impingement design in the name of improvement? The cynical answer is that this is what gun designers/companies frequently do in the quest for market share via promising a better product. The more positive response is that the quest to improve a design never ceases. However, this is not a new phenomenon for the AR; it began at its inception in the early 1960s. Soon after ArmaLite, then a division of Fairchild, spawned the AR-15, they sold off its rights to Colt. ArmaLite almost immediately turned to improving the AR-15 design, all the while being careful not to violate any patent rights. 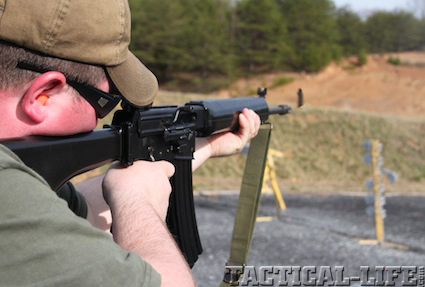 Ultimately, despite the AR-180’s positive features, the design was not widely adopted or popular with the public.

AR-18
Arthur Miller, George Sullivan, and Charles Dorchester were tasked to create an alternative to the AR-15 in the form of the AR-18. This was accomplished by turning to a piston operating rod action combined with using sheet stampings in the manufacturer of the lower and upper receivers. The AR-18 was equipped with a now all-too-familiar short-stroke gas piston located above the barrel. The AR-18’s bolt carrier rides two metal guide rods that double as return springs; this is different than the AR-15 design, which has the bolt carrier in contact with receiver rails and return spring located in the buttstock. This not only allows for the AR-18/180’s stock to fold for a more compact form, but it also creates greater clearance and tolerance to foreign materials in the action—not to mention the short-stroke piston prevents dumping hot gases directly into the receiver. Further differences between the AR-18 and AR-15 are evident in the charging handle on the AR-18 being connected directly to the bolt and reciprocating with the action, versus the AR-15 charging handle design. The more conventional AR-18 bolt allows a user more purchase when operating the weapon during loading, malfunction clearance, etc.

The U.S. military purchased a handful of AR-18s in 1964 for evaluation before settling on the AR-15/M16. Instinctually, the gas-piston ARs appeal to many by the very fact that hot gases and powder residue are not dumped into the action like the original direct impingement (DI) design. Anecdotal evidence of bolt carriers being handled soon after long strings of fire and merely wiped down compared to their DI cousins reinforces this. Current proponents of piston-driven ARs point to greater reliability in adverse conditions and less reliance on routine maintenance compared to the DI operating method. These same arguments were put forth in the 1960s as well, though to no avail, as the AR-15/M16 quickly became entrenched in the military supply chain. 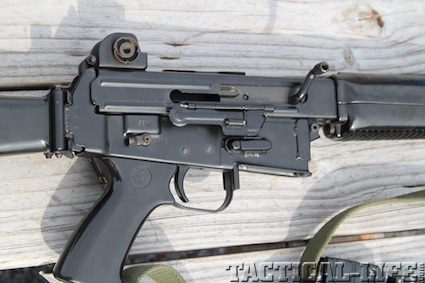 AR-180
ArmaLite responded to the lack of military sales for the AR-18 by introducing a semi-auto-only variant of the AR-18—the AR-180 in 1969. Looking back and analyzing the facts at hand, this seemed a sound idea with great potential due to little competition in the civilian market for “black rifles,” especially one priced as competitively as the AR-180. Furthermore, Colt had its hands full with producing M16s, with little time to consider introducing the AR to the civilian market. ArmaLite was trying to offer a reasonably priced military-style semi-automatic rifle variant. Indeed, they were ahead of their time in the 1970s. We take such models for granted today without a second thought because of the number of ARs/AKs/G3s/FN-FALs we have on the market.

The AR-180 weighs in slightly over 6 pounds and measures 38 inches long. The AR-180’s 18-inch barrel features a 1-in-12-inch twist rate, as found on the original M16. The 55-grain .223 bullets were the norm, with no thought given to the heavier .223 bullets common today. The AR-180 has a true 5.56mm chamber, enabling it to fire both 5.56mm and .223 Remington loads. The AR-180 takes a magazine very similar to the AR-15, though with the magazine catch slot located on the right side. This is a different spot than typical AR-15 magazines with a magazine catch on the left side. Original AR-18/180 magazines are costly, but fortunately alteration of AR-15 magazines is a relatively simple affair, ensuring a supply of magazines. 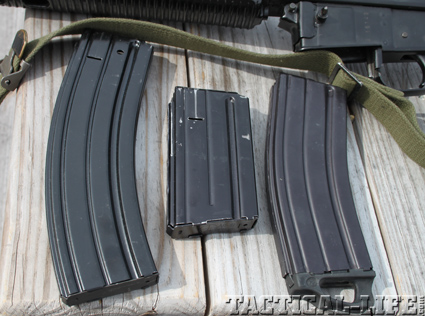 The AR-180 did away with the elevated carry handle sight arrangement found on its AR-15 rival and offers a slightly longer sight radius than the AR-15. The AR-180 features sights similar to the A1-style found on the early M16s, with the elevation controlled by the front post and windage from rear. First and foremost, the AR-180 sight is a battlefield sight with no consideration given to the target range. The two flip-up apertures are on different planes, allowing for a quick shift of zero depending on the location of the target. The 5.56mm/.223 ballistics translate into flat trajectory of 1.5 inches high at 100 meters and 7 inches low at 300 meters—thus holding center-mass to obtain hits out to 300 meters. This strikes me as being a much simpler and practical approach to a fighting rifle’s sights. The AR-180 was ahead of its time, with the inclusion of a scope-mounting base on the rifle’s receiver to allow for the quick mounting/dismounting of optics with a proprietary ArmaLite scope base. It took many years for AR-15s to be developed with “flattop” receivers conducive to mounting optics. 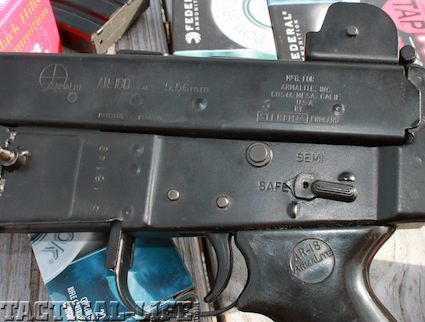 The AR-180 was originally produced in Armalite’s Costa Mesa plant from 1969 to 1972 before moving to Japan’s Howa Manufacturing from 1972 to 1974 and eventually to Sterling Armaments in the UK from 1976 to the mid-1980s. The one tested was produced in the Sterling plant.

Ultimately, despite the AR-180’s positive features, the design was not widely adopted or popular with the public. Many contend that the AR-18/180 was a superior design compared to the AR-15. Agree with this or not, ArmaLite designers were onto something, considering the evolution back to piston-driven systems in AR-15s. 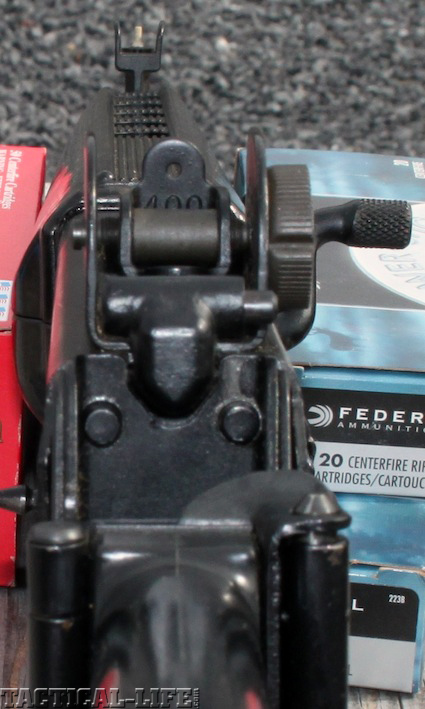 The AR-180 dispensed with elevated carry handle with sights located closer to the action. A sampling of Black Hills, Federal, Hornady, and Wolf Ammunition (not shown) were tested with no issues encountered.

Rifles such as the Singapore SAR-80, British SA-80, and HK G36 further support the soundness of the Armalite AR-18/180 design. As is the case so many times, the AR-15/M16 rifle adopted by our armed services became too popular to contend with. The AR-180’s rocky production road, with production at a variety of locales, further hindered any potential civilian sales. The AR-180 was originally produced in ArmaLite’s Costa Mesa, California, plant from 1969 to 1972, before moving to Japan’s Howa Manufacturing from 1972 to 1974, and eventually to Sterling Armaments in the UK from 1976 to the mid-1980s. I have read that approximately 20,000 AR-18/180 variants were produced. 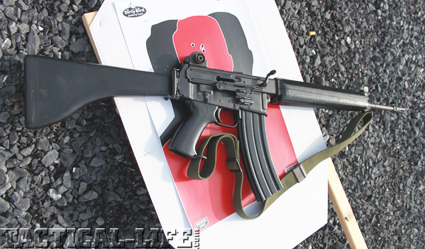 Range Test
I was fortunate to borrow Jarred Lemieux’s AR-180 for range testing at Echo Valley Training Center. Jarred’s AR-180 is one of the Sterling, England, AR-180 variants. The AR-180 reminded me of the M16A1, which makes sense considering they were peers. What I mean by this is a return to basics—a lightweight, great handling rifle with potent firepower. This especially applies for civilians and even most law enforcement personnel outside of specialized tactical teams, who do not require the plethora of accessories currently found on the AR-15. Not all weapons need rails and an array of accessories to be considered viable. While reliability should never be compromised in terms of cost/performance ratios, other items considered a must for some may not be high priority or worth it for others. KISS (keep it simple, stupid) methodology can pay dividends in terms of budget and allow for concentration on other priorities, such as training for example. 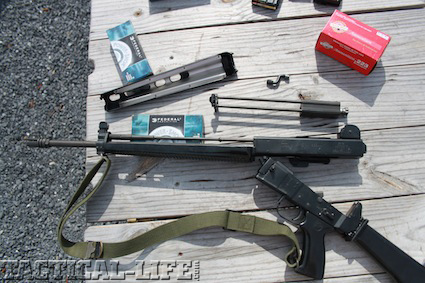 The AR-18/AR-180 is equipped with a now all-too-familiar short-stroke gas piston located above the barrel. The AR-18/180’s bolt carrier rides two metal guide rods that double as return springs, allowing for the AR-18/180s stock to fold for a more compact form, but more importantly, this creates greater clearance and tolerance to foreign materials in the action.

I confined ammunition tested to Wolf steel-case .223 55-grain loads, Black Hills’ new and remanufactured 55-grain FMJ, Federal 55-grain FMJ, and Hornady TAP 60-grain. Accuracy with the ArmaLite AR-180 was more than acceptable, with the open sights producing 1- to 2.5-inch groups at 50 yards with the ammunition tested. A magnified optic mounted on the AR-180 would have surely produced better results by not being handicapped by my eyesight limitations. Jarred’s AR-180 had a couple original 20-round magazines as well as a 45-round magazine available for use during the evaluation.

I employed a couple familiar range drills while evaluating the AR-180. One drill began by engaging targets at 35 and 115 yards. Targets were engaged five times each starting from a standing position, moving to another locating, five more rounds from kneeling, and finally moving yet again and transitioning to the prone with five more rounds each, reloading as necessary. The layout and availability of various steel target and simulated barricades at Echo Valley Training Center proved convenient. 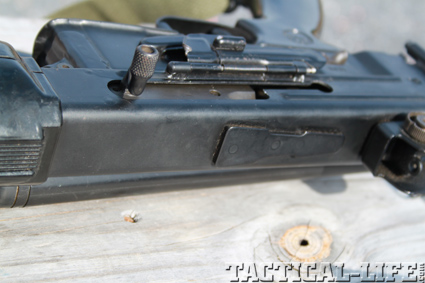 The AR-180 was ahead of its time, with the inclusion of a scope-mounting base on the rifle’s receiver to allow for the quick mounting/dismounting of optics with a proprietary ArmaLite scope base.

Final Thoughts
Overall, it is not difficult to fathom why the piston-operated AR-180 produced a cult following—lightweight, high capacity, economical to produce via stampings, and extremely reliable. This was especially reinforced considering the various issues encountered with the early M16s. Granted, the AR-18/AR-180 had their own production issues with the frequent manufacturing moves. But, without a doubt, it was a pleasure to get the opportunity to handle and research the AR-180.