Aficionados of “traditional” firearms like old name brands. An AR-15 buyer has an array of more than 70 companies to choose from when they want to add a rifle of this time-tested platform to their collection. There’s a certain mystique to buying a Colt AR-15. But if you want to buy a rifle from the original company that gave the AR its namesake, ArmaLite, Inc., then purchasing an M-15 makes perfect sense.

If you are ready to add a 6.8 SPC-chambered AR-platform rifle to your collection, then ArmaLite’s addition of this caliber to its lineup is good news. On the other hand, you may be a law enforcement officer who has learned that a .22-caliber rifle is a good weapon, but it has its limitations. The special operations community has its reasons for upgrading to a larger-caliber rifle. The LE community also has learned the hard way that defeating barriers reliably, such as auto windshield glass, potentially requires more energy and bullet mass than provided by a 5.56mm NATO cartridge. Answering that call, too, ArmaLite’s M-15A4 Carbine chambered in 6.8 SPC is a good alternative when shopping for a duty carbine.

Built on the same platform as the ArmaLite M-15A4 Carbine, the company started shipping their first rifles in 6.8 SPC only recently. To get the highest performance possible from this cartridge, ArmaLite has chosen to chamber their rifles in the Spec II configuration. 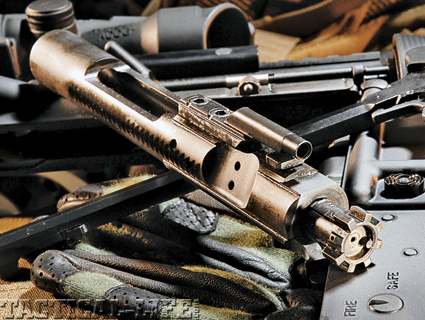 The mil-spec bolt carrier is made from Carpenter 158 steel and features a gas key that works with the direct gas impingement system. 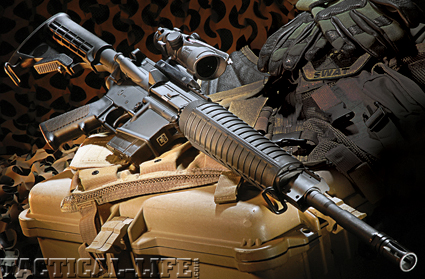 Professionals who want enhanced stopping power from their duty rifle will be well served with Armalite’s M-15A4 chambered in 6.8 SPC. Shown here with the Trijicon 4x ACOG.

Gun Details
ArmaLite didn’t just pick just a standard mil-spec barrel configuration for their M-15A4 6.8 SPC. The barrel is chrome-lined moly-vanadium per MIL-B-11595-E that has been double-lapped for its 16-inch length. It also incorporates an M203 step-down for its external dimension, and the barrel measures 0.75 inches at the point under the barrel. The muzzle is threaded 5/8-24 threads per inch and capped with an A2-style flash suppressor. The barrel has a 1-in-11-inch twist rate, which is ideal for bullets weighing 110 to 115 grains.

The upper and lower receivers get their strength from forged 7075-T6 aluminum alloy. The flat-top upper receiver has a Mil-Std-1913 Picatinny rail with laser engraved numbering. Nestled within the receiver is a tactical two-stage trigger. The let-off on the first stage measures 3.5 pounds and the second stage breaks at 5.5 pounds.

This carbine is fitted with a black mid-length handguard and gas system. 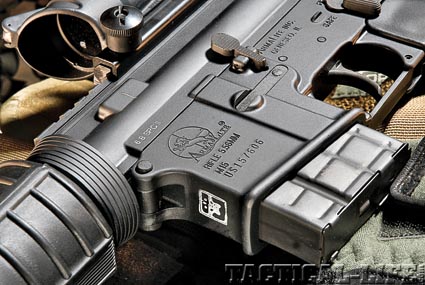 Standard on the M-15A4 is a 10-round magazine, although higher-capacity variants are available for those looking for added firepower.

An appropriately matching black collapsible buttstock adjusts the length of pull from 10.38 inches to 14.5 inches. The overall length is 35.6 inches, and the rifle weighs 6.44 pounds without a magazine. The front gas block is an integral sight base configured with a Picatinny rail. 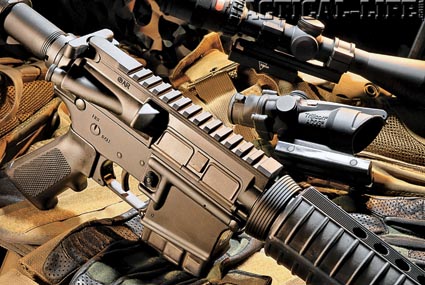 The aluminum flat-topped upper receiver features an integral strip of Picatinny rail that is machined directly into the M-15’s upper face. 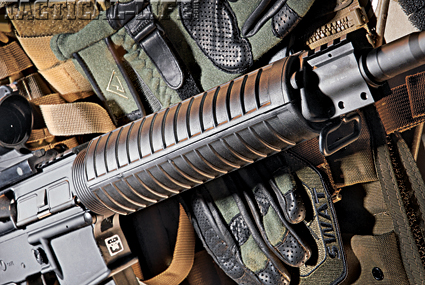 Range Time
To evaluate the M-15A4 6.8 SPC, I fired four factory loads and two handloads. Testing was conducted in two sessions two weeks apart, but conditions were virtually identical: temperatures in the high 90s and no wind. I mounted a Trijicon AccuPoint 5-20X scope to provide ample magnification and reduce aiming error. To determine velocity with each load, a Shooting Chrony Beta Master chronograph recorded shooting data. Since the rifle’s muzzle was threaded 5/8-24, I was also able to test some loads with an Advanced Armament Corp. Cyclone suppressor.

I chose five-shot, 100-yard groups fired from a steady bench to ascertain the M-15A4’s accuracy potential. From a purely statistical standpoint, 10-shot groups provide more robust data sets, but firing half as many shots seems to work better with light-profile barrels in hot weather. Five-shot groups from this rifle produced several sub-MOA groups with a variety of loads.

I incorporated the Cyclone suppressor when evaluating Hornady’s 120-grain SST loads. The tightest group fired with this load measured 1.809 inches. For comparison, I removed the “can” for the next groups, and it grew in size to 2.8 inches. Each group had an uncalled flyer, which added more than an inch to the final group size. Surprisingly, when the suppressor was removed, the center of the unsuppressed group only moved up and left an inch. All groups together averaged 2.37 inches. The average velocity was 2,519 fps.

The first handload was a Hornady 110-grain V-MAX driven by 31 grains of BL-C2 and a Federal small rifle match primer loaded into Hornady cases. Group sizes ranged from 1.892 inches to 2.493 inches, with an average of 2.2 inches. The second handload consisted of 23 grains of IMR 4198, with the same case and primer as the previous load, driving a 115-grain Sierra MatchKing. Group sizes ranged from 1.306 to 2.247 inches.

Final Thoughts
ArmaLite was conservative in their accuracy assessment of this being a 2-MOA rifle. I was able to find loads that outperformed this estimate. Its accuracy and firepower are an upgrade in performance over an AR chambered for 5.56mm NATO, and with the extra punch of a 6.8mm SPC II. All ArmaLites are made in America and come with a lifetime warranty. Summing up, ArmaLite, once again has crafted a weapon that is a reliable rig with fight-stopping power at an affordable price.