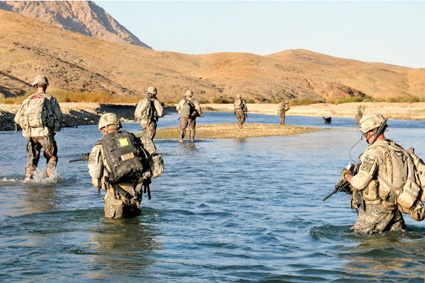 ARLINGTON, Va.– Nothing says pride like a Soldier in uniform. Today’s Soldier has much to be proud of in the current Army Combat Uniform (ACU).

As Sgt. Maj. of the Army Kenneth O. Preston said, the ACU was designed by Soldiers, for Soldiers. Developed with functionality in mind, many design aspects of the uniform lend themselves to low maintenance, such as the 50/50 cotton/nylon wrinkle-free fabric and the shine-free boots. The uniform also has pockets for elbow and knee pad inserts for added protection, and drawstring at the ankles and waist for improved comfort and fit.

Since introduction of the ACU in 2004, the Army has made more than 25 improvements to the uniform and associated equipment based on Soldier input. These include a reinforced seat, buttons on the cargo pockets, and better attachment of the infrared tab. This improvement process is ongoing, as Soldiers keep suggesting new ways to adapt the uniform to their needs.

Now the Army is focusing on the concealment the ACU provides to Soldiers operating in Afghanistan’s unique environment of mountains, deserts, and woodlands.

“The Army is all about taking care of Soldiers,” said Command Sgt. Maj.Jeffrey J. Mellinger of Army Materiel Command. “That means providing Soldiers with the best equipment. In this case, it means evaluating what is the best camouflage for uniforms in current operating environments.”

The Army is exploring alternate camouflage patterns in two ways. First, the Army is equipping two battalions in Afghanistan with uniforms and personal equipment in alternate camouflage patterns. One battalion is receiving uniforms in MultiCam, a pattern worn by some Special Forces troops in Afghanistan. The other battalion is receiving uniforms in Universal Camouflage Pattern – Delta (UCP-Delta), a variant of the current ACU camouflage pattern that incorporates the Coyote Brown color and reduces the percentages of sand and gray colors. The battalions also will retain their standard ACUs.

Second, the Army is evaluating six candidate camouflage patterns, including the currently used Universal Camouflage Pattern. The intent is to determine which of the six currently available patterns, with corresponding personal protective equipment, provides Soldiers with the most effective concealment in Afghanistan.

“We already have extensive data on the performance of various camouflage patterns in particular environments, but we need to keep building the science for Operation Enduring Freedom,” said Brig. Gen. Peter N. Fuller, the Program Executive Officer Soldier. “For example, we need more information on how the uniform camouflage blends with the Soldier’s combat equipment in specific environments.”

While the issue of camouflage patterns has recently been in the news, the Natick Soldier Research, Development and Engineering Center (NSRDEC) has studied and reported on the effectiveness of different camouflage patterns for many years. The current ACU provides Soldiers with concealment in a variety of environments, from urban to desert, both during the day and at night.

A team has deployed to Afghanistan to collect data in the various environments, outside the Forward Operating Bases, where Soldiers are fighting the enemy. The team includes representatives from the Program Executive Office Soldier, Army G-4, U.S. Army Infantry Center, U.S. Army Special Operations Command, the Asymmetric Warfare Group, the U.S. Naval Research Laboratory, and NSRDEC.

Feedback from the two battalions, as well as results of additional tests being conducted by NSRDEC on multiple camouflage patterns, are expected to be presented to Army leadership in early 2010.

ARLINGTON, Va.-- Nothing says pride like a Soldier in uniform. Today's Soldier has much…