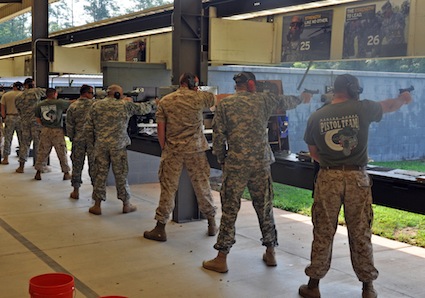 FORT BENNING, Ga. — Soldiers, Marines, Airmen, Sailors and Coast Guardsmen compete at the 52nd Interservice Pistol Championships. The best pistol shooters in the military come together annually to test their skills against their peers and learn new techniques to further enhance their services marksmanship capabilities.

Despite fielding a team without its full arsenal due to deployments to Afghanistan, Soldiers from the U.S. Army Marksmanship Unit showcased the skills and capabilities of the Army at the 52nd iteration of the Interservice Pistol Championship June 12-17.

Every service of the military was represented at the week-long event, braving the intense southern heat to be tested against the best the military has to offer.

Sgt. 1st Class James Henderson, USAMU, was crowned champion after dominating the field, winning every day’s aggregate and breaking the record for overall individual aggregate for the match, besting the record he set in 2008. It is Henderson’s seventh individual championship and the third time he has broken the match record. 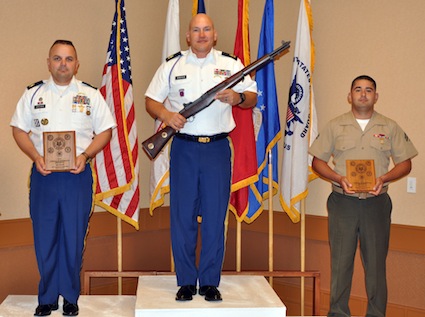 “This is a true testament to being the best overall pistol shooter (in the military),” he said. “It’s a week-long, it’s all four guns—it’s tough. It means a little more to me than shooting against civilians at the nationals. I don’t mean that in a bad way, but it feels good to be the best in the military. My job is to train other Soldiers so to be the best among them, it’s kind of cool.” 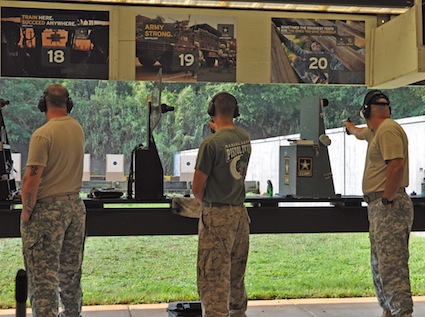 Henderson’s overall total was 3554-194x, breaking the record by two targets. He won the .22-caliber, .45-cal., centerfire and service pistol aggregate titles as well as shooting nine high match scores to add to his hardware.

U.S. Army Blue, made up of Soldiers from the USAMU, won the overall team championship with a score of 4643-202x. Team members consisted of: Henderson, Grover, Sgt. 1st Class Gregory Wilson, Staff Sgt. Patrick Franks, Staff Sgt. Jean-Noel Howell, and Sgt. Benjamin Lanzotti. The team won every team match during the competition, giving the Army a clean sweep during the week.

“Even though we are missing some guys, everyone still stepped up and did what they needed to do,” Henderson said. “It’s pretty impressive and shows their determination. It’s that strength we always talk about as Soldiers that drives us. The Army expects us to be the best and my teammates rose to the challenge.”

Shooters compete with four different calibers of pistol, shooting one gun a day in individual and team matches. It makes it important that the competitors are proficient in a broad array of pistols and enables the competition to crown the best of the best.

The championship allows the best pistol shooters in the military the opportunity to come together and discuss new techniques to further enhance their services marksmanship capabilities.

“As we are part of a joint force that has been engaged in combat operations for nearly 10 years and a joint force that may remain engaged in combat operations for the foreseeable future, it is important to know that the marksmanship training provided to all of our fellow servicemembers will help shape the course of future battles and propel our nation to future victories,” said Lt. Col. Daniel Hodne, commander, USAMU. 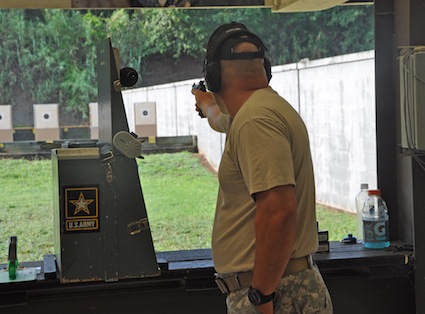 “If you combine the very best as a capability built within a network, this group represents an incredible amount of potential energy to increase the marksmanship readiness of our joint force,” Hodne said.

The Interservice Rifle Championships are next on the schedule, slated for July 19-26 at Marine Corps Base Quantico, Va. It will be the 50th anniversary of the prestigious competition.