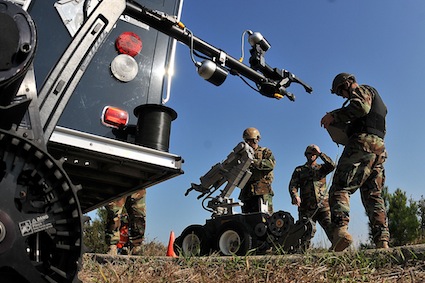 The Army’s bomb disposal units have been in high demand since explosives became the weapon of choice against troops in Iraq and Afghanistan. But now, with fewer troops in Iraq, these specialized units have resumed what was once an annual competition to find the best bomb-hunters in the Army.

This week’s Explosive Ordnance Disposal Team of the Year competition at Fort Campbell, Ky., was the first time the event was held in 10 years. The three-day event tested the participants’ skills against suicide vests, improvised rocket launchers and deadly munitions.

The competition featured the best three teams from the 52nd Ordnance Group, which is headquartered at Fort Campbell, but encompasses units based around the country.

Command Sgt. Maj. Harold Dunn, of the 192nd Ordnance Battalion at Fort Bragg, N.C., said the competition hadn’t been held for so long because there was no lack of work for the soldiers, who he said risk their lives to protect other soldiers and civilians from the top killer in today’s wars.

“They probably spent 12 months preparing for this competition, going against their peers for 12 months,” Dunn said. “So what we are seeing is the best in their field.”