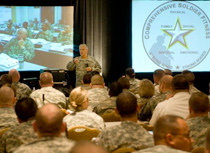 Resilience is more than a buzzword; it is a new way of thinking for the service. “All Soldiers want to do better – whether it is physically or mentally,” Casey said. “This is a way to help them do that.”

The group Casey addressed here had noncommissioned officers and officers from a variety of different military occupations. The video screen from Fort Jackson showed Soldiers with drill sergeant hats on their desks.

“You will be the first group to go out and help me bring this way of thinking to the Army,” Casey said during a news conference and in an interview. “I firmly believe that this effort to build resilience and enhance performance is fundamentally necessary if we are going to sustain this force over the coming years.”

The Soldiers in the class supported this notion. “The [master resilience trainer] program is not a module to teach, but a concept to embrace and use in all things,” an NCO from Fort Campbell, Ky., said.

Casey and other Army leaders began thinking of the need in the summer of 2008. Active-duty Soldiers were deploying to Iraq or Afghanistan for a year and returning to their home stations for a year. Reserve-component units were deploying for a year and at home for three. “We had been doing that for about five years,” Casey said. The Army may be called on to continue this personnel tempo.

The Army understood it faced a problem, Casey said. The effects of repeated deployments – particularly with short “dwell times” at home stations between them are cumulative. “All our studies show that the more times you deploy with little time between deployments, the more susceptible you are to having mental fitness challenges,” the general said.

Service leaders looked at what was available to combat the problem. The general said there were pre- and post-deployment assessments. There were education programs. Finally, there were good programs and treatments if there were problems. “But when we looked at the front end, we were very light on the preventive tools,” Casey said. “We didn’t have ways of building resilience and enhancing performance.”

The Army brought together some of the best minds in the country on the subject and that led them to the University of Pennsylvania and Dr. Martin Seligman, director of the university’s Positive Psychology Center. Seligman put together a course for NCOs and officers to use to train their Soldiers in resilience skills. “People say this helps them, not only as a Soldier, but as a person,” Casey said.

The goal is to have a master resilience trainer in each battalion by this time next year, Casey said. General officers and sergeants major all have been briefed on the program, and Casey is putting out another letter to them about the program.

The program has to do more than just train skills, Casey said. It also has to change attitudes.

“There is a perception out there that everyone who goes into combat gets post-traumatic stress,” the general said. “That’s just not true. In fact, science tells us just the opposite; the majority of people who go to combat have post-traumatic growth. They’re confronted by something very difficult, and they are stronger as a result.”

Studies show that people do grow from adversity. The program seeks to give trainers skills they can pass on to Soldiers.

The Soldiers are receptive, Seligman said. “I was very pleasantly surprised by the way they have responded,” he said during a news conference. “I think the Soldiers are taking this to their lives at least as well, if not better than the many civilians we have taught.”

Karen Reivich, the main teacher of the course, said “everyone in that room is putting their heart and soul into this training.” She said the Soldiers are “engaged and task-focused.”

Reivich noted similarities between the Army training and that for civilians. “We’re all humans after all,” she said, but the “situations that these Soldiers deal with are more complex.”

This was Casey’s third visit to the facility. The general also visited two pilot classes, and has studied the feedback from students and suggested changes.

“The intent of this program is to give more and more of our Soldiers the skills they need so when they come out of combat they will have a growth experience,” he said. 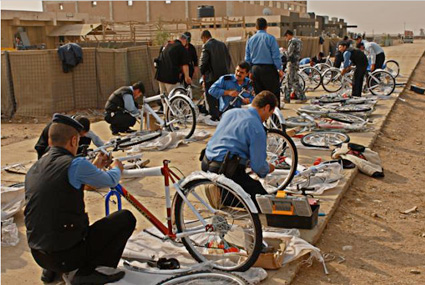