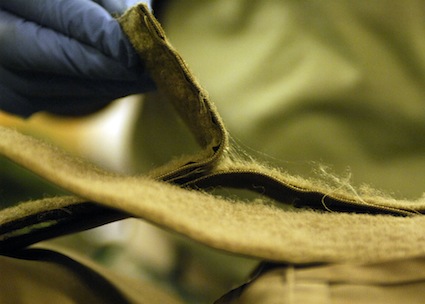 The voice of the Soldier has been heard: the Army announced the patrol cap will replace the black wool beret as the default headgear for the Army combat uniform.

Also changing are the options for how Soldiers can attach certain items to their ACU shirts. Army Chief of Staff Martin E. Dempsey said Soldiers will soon be able to sew on name tapes, service tapes, rank insignia and skill badges, instead of using Velcro.

The changes were made after Dempsey received input from Sergeant Major of the Army Raymond F. Chandler III, who had been tasked to gather opinions from Soldiers in the field.

“I am a scout for General Dempsey, who asked me to look into everything a Soldier wears from the top of his head to the bottom of his feet,” Chandler said. “These are changes that the field said they wanted to see.”

Typically, uniform changes come as a result of a board that meets twice a year. But Chandler said issues surrounding both the ACU headgear and the use of Velcro were changes the Army chief of staff wanted to bring to the Secretary of the Army immediately.

“I have also discussed this with my board of directors — the most senior sergeants major of our Army,” Chandler said. Post-deployment combat uniform surveys were used as a basis for the changes.

The No. 1 and No. 2 issues, Chandler said, involve the beret and Velcro.