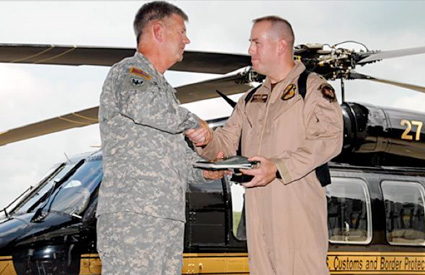 REDSTONE ARSENAL, Ala. (Aug. 19, 2009) — With a handshake and the passing of a log book and keys, representatives from the Utility Helicopter Project Office to the U.S. Customs and Border Protection Agency marked the delivery of the first of four UH-60M aircraft that will enter CBP service by July 2010.

With an improved airframe, avionics and propulsion system, the UH-60M helicopter is the latest in a series of Black Hawk helicopter variants, and is built by the Sikorsky Aircraft Corporation. These state-of-the-art helicopters will allow the CBP to modernize its rotary-wing fleet from the UH-60A aircraft it now uses to protect the nation’s borders, and thus better achieve its mission.

The ceremony was a symbol of partnership and team work in an effort to improve U.S. security, said Brig. Gen. William Crosby, program executive officer, Aviation, who hosted the ceremony.

“This is about partnership; in order to be able to provide this great capability, this great aircraft, to our partners in the Department of Homeland Security. What enabled that to happen is a partnership within the Army, the Army pulling together with our brothers in (the Aviation and Missile Command) and (Research, Development and Engineering Command) to procure this aircraft and to modify it to meet the requirements that our Department of Homeland Security so validly needs to execute the tough, very, very difficult mission,” said Crosby, who is the Army manager for the Apache helicopter, cargo helicopter, utility helicopter, unmanned aircraft system, armed scout helicopter, and Aviation Systems programs.

AMRDEC’s Product Integration Facility is responsible for the management, design, fabrication, integration and installation of mission kits to include navigation, communication, emergency and environmental controls. In addition, the PIF will team with the aviation engineering directorate to obtain and airworthiness release for these aircraft.

Handing over the log book and keys to the newest Black Hawk was difficult for Crosby, the aviator.

“This is the first of four M-configuration aircraft. Great capability. I’m jealous of you guys flying it out in Arizona. I wish I could go with you,” Crosby said

The CBP is one of the Department of Homeland Security’s largest and most complex components, with the mission of keeping terrorists and their weapons out of the U.S., and its Office of Air and Marine is the world’s largest aviation and maritime law enforcement organization.

“This is a fantastic day in the Department of Homeland Security and for us in the Office of Air and Marine; to accept a brand new, brand spanking new, Black Hawk and a Mike model no less; glass cockpit and everything,” said Stanton.

The relationship between the Army and elements of Homeland Security has been ongoing for a quarter of a century.

Stanton illustrated that history with the story of a Black Hawk that was flown during Operation Urgent Fury in 1983. The Black Hawk crashed at sea, was hoisted out, “hosed off, painted black, it’s got a gold strip on it, and its name is 423 and it’s in Tucson — still today.”

“This is an awesome platform. We will use this every day to protect America from our enemies both foreign and domestic,” Stanton said.

“We are responsible for the borders and we have a lot of internal missions as well that we use these kinds of platforms for, both in humanitarian roles such as supporting (the Federal Emergency Management Agency) and also in our border security roles to keep bad people and bad things out,” Stanton said. 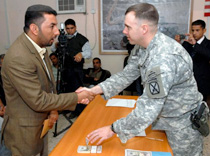