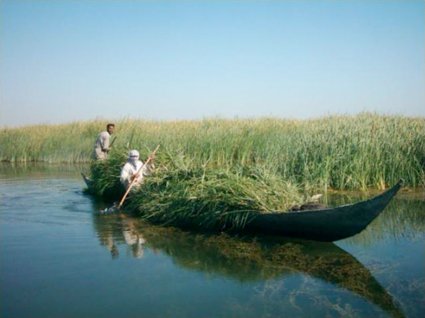 CONTINGENCY OPERATING BASE BASRA, Iraq– From the first day of Basic Combat Training, Soldiers are trained not to ask the question “Why?” Maybe “Where?” or “When?” – but never ‘Why?’ However, in today’s battlefield, “Why?” is more important than ever.

“If Soldiers want to know, ‘Why are the children throwing rocks at us?’ and ‘Why are they rocketing us?’ That’s what we do,” said Leslie Kayanan, team leader of the Human Terrain System team assigned to the 34th Infantry Division.

HTS, started in June of 2006 and expanded by Secretary of Defense Robert Gates in 2007, studies cultural perceptions by attaching anthropological research teams to combat units in Iraq and Afghanistan. There are currently 21 teams in-country, one for each brigade, division and corps.

“We are groups of scientists, and we work embedded with units,” said 1st Lt. Nestor Carrasquillo, a research manager for the HTS team attached to the 34th Inf. Div. “We talk to the local population and provide the commander with our assessment.”

“On every team we have social scientists who are formally trained researchers,” added Dr. Rubye Braye, a social scientist and a retired lieutenant colonel. “Team members have an opportunity to obtain the perceptions of the Iraqi people on key issues to better understand their needs and requirements. This gives them the opportunity to be the voice of the people.”

For instance, Braye recently spoke on behalf of Iraqi workers who worked on Contingency Operating Base Basra, after local employees had to enter the gate through a narrow path lined with concertina wire. The employees were concerned someone could slip and fall onto the wire, and felt it was disrespectful to walk through a criminal-like path. Braye met with 34th Inf. Div. leadership to discuss alternative security measures.

In addition, HTS scientists inform military leadership of the specific cultural characteristics in a region. Through surveys and face-to-face interaction, HTS scientists ask questions like, “Are you scared to vote in the elections? Do you trust the Iraqi police? Are there any disputes in your village? What can Coalition forces do for you?”

The sayyid, especially in a tribe that has links to a holy person, is nominally related to Mohammed and esteemed for his wisdom and judgment, explained Kayanan.

“And it’s more than just providing raw data,” added Braye. “We analyze the data to determine the second and third-order effects. When a decision or an option is being considered, we assess the effect it will have on the local population.”

A recent study done by HTS on the marshes of southern Iraq illustrates this process.

Often considered the location of the Biblical Garden of Eden, the fertile marshes of southern Iraq were once considered the breadbasket of the Middle East. In what can be called ecological genocide, Saddam Hussein destroyed the marshes after the first Gulf War. Once twice the size of the Florida Everglades, they are now a fraction of their former size, and HTS scientists advised 34th Inf. Div. leadership of it’s future potential.

“We believe that we should support the restoration of the marshes,” said Braye. “If that is done, the second order effect is that you will have businesses and agri-businesses that will be restarting, farmers that live in the area will be able to farm to the extent that they did in the past.”

“Restoring the marshes will bring back the local economy and stop arms smuggling,” added Kayanan, who explained the third-order effect would be the goodwill generated by the government of Iraq working to restore an area ravaged by the old regime. It would show the Iraqi people that their government is back in the business of serving its citizens.

“The focus,” said Braye, “is on helping people realize, first political stability where there’s a government in place that really works, and then to have that government work to promote economic opportunity for people6 who desire meaningful work other instead of payments from insurgents to attack Coalition forces.”

While critics have pointed to HTS as an example of the military “weaponizing anthropology”, Braye believes it will bring long-lasting benefits to the people of Iraq.

“If the weapon is using tools of peace to better understand those we have conflicts with, and to use those tools to resolve conflicts peacefully, then that’s the weapon. I would challenge my colleges who say we are weaponizing a tool that I believe is being used to promote peace,” said Braye.

“I am really excited that one day the Iraqi children will see conflict resolution settled non-violently, and that they will have the tools to know that there are things you can do to settle and resolve conflict without having to resort to violent means,” she concluded.